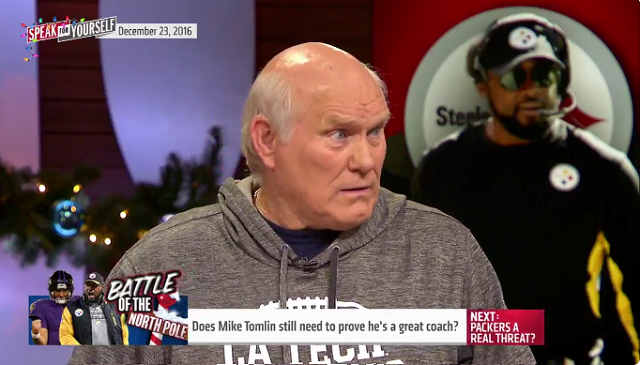 Terry Bradshaw unloaded on Pittsburgh Steelers head coach Mike Tomlin during FS1’s Speak For Yourself on Friday, declining the 44-year-old a spot on his list of great NFL coaches.

Bradshaw — a four-time Super Bowl champion with the Steelers — made it clear that he doesn’t think Tomlin is a great coach, instead referring to Tomlin as “really a great cheerleader guy”:

“[Mike Tomlin] is a great cheerleader guy, but I don’t know what he does… I don’t think he is a great coach at all.” — @TerryBradshawpic.twitter.com/5VSmFDMBVq

Nobody asked Bradshaw who does pop into his mind when he thinks about great NFL coaches.

Cris Carter asked Bradshaw if he thought former Steelers head coach Bill Cowher was a great coach, and the answer was an easy yes for Bradshaw:

The Steelers were worse when Cowher started than when he left, but there wasn’t that large of a difference. They had gone 7-9 the year before Cowher arrived and 8-8 the year before Tomlin arrived, although only two years removed from a championship.

In 15 years, Cowher had a 62.3 winning percentage compared to Tomlin’s 63.9 mark through nearly 10 seasons. He won one Super Bowl and had one additional Super Bowl appearance. Cowher also had three losing seasons in Pittsburgh while Tomlin has had zero.

Steelers director of communications Burt Lauten was quick to point out that Tomlin has one Super Bowl victory, an additional Super Bowl appearance, four division titles, and reached 100 wins faster than any other coach in Steelers history.

“Now I believe that their defense hasn’t played well under his tenure because they spent all the money on the offensive side. So i think that’s a major reflection on how the team has played. They’ve drafted some players that have had some suspensions and everything. They take those guys off the field, that really changes the talent pool. Now do I think he’s a great coach? No. But I think he’s a good coach, and I think Pittsburgh, like they have done, is going to be very, very patient because they’re only a player or two away from being in the big game.”

The Steelers can clinch their fifth AFC North title under Tomlin with a with a win Sunday against the Baltimore Ravens.