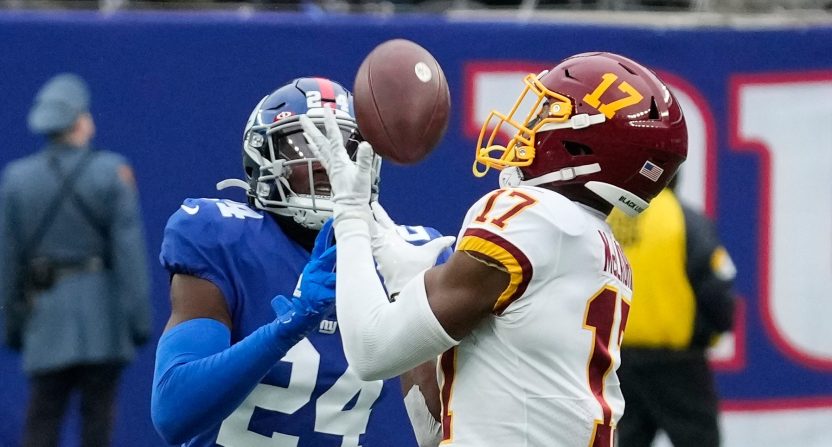 Throughout the NFL offseason, Terry McLaurin has been one of the high-profile receivers in the NFL looking for a new contract. On Tuesday, he found one.

Adam Schefter of ESPN reporter that McLaurin and the Washington Commanders have agreed on a three-year deal worth $71 million, which will make McLaurin one of the five best-paid receivers in the league.

The new three-year extension for Terry McLaurin includes a $28 million signing bonus, the largest given to any wide receiver, and also has 76.4 percent of the new money in deal guaranteed. The deal contractually ties the 26-year-old McLaurin to Washington through the 2025 season.

McLaurin had previously skipped Washington’s mandatory minicamp, prompting some speculation that a trade could be a possibility, though Commanders coach Ron Rivera shut that notion down in no uncertain terms.

Many share goals, no one shares the same path. Congrats my guy!! https://t.co/qDnWyNLyUq

Kinda surprised its only 3-years. But Washington had to get this done and they have before training camp. McLaurin is a damn stud and worth every penny. Let’s hope Wentz can do a better job getting him the ball down the field than others have in the past. https://t.co/b7At1OxoVJ

McLaurin has dealt with a revolving door at the quarterback position, which the Commanders are hoping will end with the trade for Carson Wentz.

DK Metcalf of the Seattle Seahawks and Deebo Samuel of the San Francisco 49ers are both receivers also looking for new deals and were part of the same draft class as McLaurin. Seattle has had two starting quarterbacks start games in Metcalf’s career while the 49ers have had four. Washington, meanwhile has had seven different quarterbacks start games during McLaurin’s career. Of that group, only Taylor Heinicke and Dwayne Haskins, have started more than 10 games.

Despite the instability at quarterback, McLaurin has been highly productive in his first three NFL seasons. He’s caught 222 passes for 3,090 yards with 16 touchdowns. In 2021, McLaurin caught 77 passes for 1,053 yards with five touchdowns.