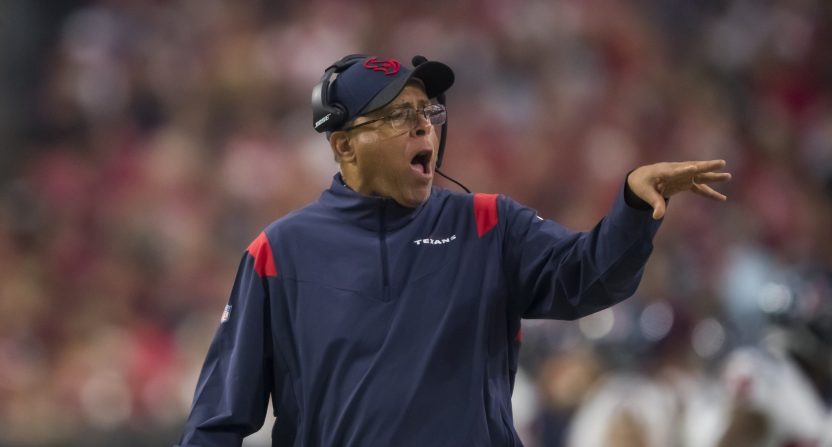 The Houston Texans fired head coach David Culley on Thursday after just one season at the helm. It was a move that surprised a lot of people but also disappointed many who saw it as the latest instance of a black coach getting less time and support than would be expected.

Many NFL pundits noted that there was reason to believe this was always Culley’s fate when the long-time assistant took the head coaching job, his first, last year. It was seen as a stopgap for the franchise between the end of the contentious Bill O’Brien era and a time when they were ready to truly start rebuilding.

David Culley was hired to be fired after one year. They knew the team would stink and they didn’t want to saddle someone like Josh McDaniels with 4-13. Culley did more with Davis Mills than any other coach did with a rookie QB this year.

It had been reported that Culley’s contract was only guaranteed for two years, implying even further that his employment was meant to be short.

When the Texans hired David Culley, they only guaranteed him two years of money; they knew there always was the real chance he would be one and done. As one league source texted about his one-year tenure, “I knew it when he was hired.”

However, that apparently does not tell the whole story, as Culley himself told the Houston Chronicle’s John McClain. Culley told him that he has four years remaining on his contract, guaranteed through 2025.

David Culley says his four-year contract is guaranteed through 2025: Texans fire David Culley after just one season https://t.co/aHEFY5OIZx via @houstonchron

NFL Network’s Tom Pelissero added that, per a source of his own, the Texans owe Culley $17 million on top of the $5 million he earned this season.

The #Texans owe David Culley another $17 million over the next three years, per source.

So Culley walks away with roughly $22 million for one season as Houston's head coach.

Former #Texans Coach David Culley: “I’m Just disappointed, but this is the business. Hey, I’ve been in it for a while. So I understand this is part of the business.” David says his Texans contract runs through 2025 and it’s guaranteed.

If that’s true, the Texans spent nearly $22 million for one season so that they could turn around and pay someone else presumably even more money.

The reaction to the news about Culley’s contract was mixed between those who felt that any pity people had for Culley should be tempered while others wanted to make sure the reality of the lack of black coaches in the NFL wasn’t lost in the numbers.

Happy for him. Endured one year of garbage and got paid like a king for it. Now he can go do whatever he wants after his payday https://t.co/aY0xTxtmwL

He’s better off. Take their money and doesn’t have to be a part of the clown parade anymore https://t.co/2eeYBqkuBv

that’s good for david culley, but i hope we can look past dollar signs and be a little more concerned at the dynamic of what happened here https://t.co/vjwid4EqdU

The money is extremely nice but it doesn’t change the fact that he was treated like 💩! Money is nice and I’m happy that he got his but we can’t gloss over the bigger issue. https://t.co/HahcOqbMgk

Yeah I have no sympathy for David Culley, he just made more money this year than Joe Burrow and Kyler Murray combined for a job he wasn't qualified for 😂 https://t.co/FuLTYaRd1e

They did Culley wrong however he papered in a whole different manner https://t.co/PPCbI0WSwF

We’ll see if Culley ends up taking another job or if he feels like he doesn’t have to or want to based on the experience. We’ll also wait to see who the Texans wanted to hire so badly that they were willing to pay Culley over $20 million for one season of work.