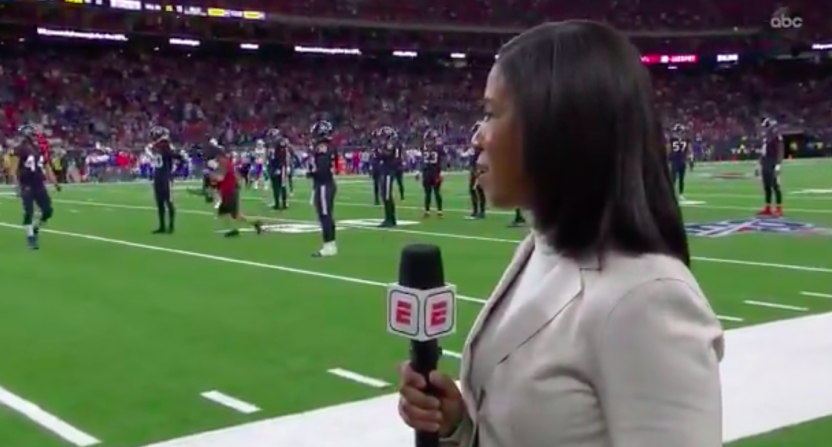 The Houston Texans are very lucky that one of the strangest NFL broadcasting moments of the year didn’t ultimately result in a touchdown for the Buffalo Bills on Saturday.

The Bills dominated the Texans in the first half of their AFC Wild Card playoff game, taking a 13-0 lead into halftime. The Bills kicked off to start the second half and everyone, including ABC and ESPN, presumed that Texans returner DeAndre Carter had called for a fair catch in the endzone, killing the play. So they cut to Lisa Salters on the sidelines. However, when a crowd murmur rose up and suddenly turned into a mixture of celebration and groans, Salters turned her attention back to the endzone where the Bills were celebrating a touchdown.

Carter had made what’s known as a safe signal, letting his teammates know that he would not be running out of the endzone. However, he didn’t actually make the fair catch signal or kneel down in the endzone. Instead, he flipped the ball to the referee nearby, who then jumped out of the way and let it fall to the ground. In other words, the ref still saw it as a live ball and a live play. The Bills quickly swarmed the ball and seemed to score a wild touchdown.

The celebration was short-lived, however. The officials gathered and agreed that the safe signal that Carter made was enough to declare the play dead, nullifying the touchdown.

On one side, this is something dozens of kick returners do every week of every season. It’s a bit like stepping over second base while turning a double play in baseball. You might not technically do what’s required by the letter of the law, but you get the benefit of the doubt. That’s why the ESPN crew on the ABC broadcast was confident enough to cut away from the play despite the lack of a whistle.

So confident, in fact, that ESPN Deportes missed the entire kickoff altogether.

Even stranger, the whole play happened during a commercial break on ESPN Deportes? pic.twitter.com/hkYHH1i6ws

On the other side, the rules are supposed to be the rules, right? And if you have to give a fair catch signal or kneel in order to signify that you are giving yourself up, then you should probably do that. Especially in a critical playoff game where your season is on the line.

Depending on who you’re rooting for, you’re likely on one side or the other. At the moment, the Bills remain in control of the game, but it won’t take much for the Texans to get back into it. If Houston does end up coming back to win, you better believe there are going to be a lot of complaints about the change on this call. Add it to the pile of all the other dubious referee moments from this NFL season.