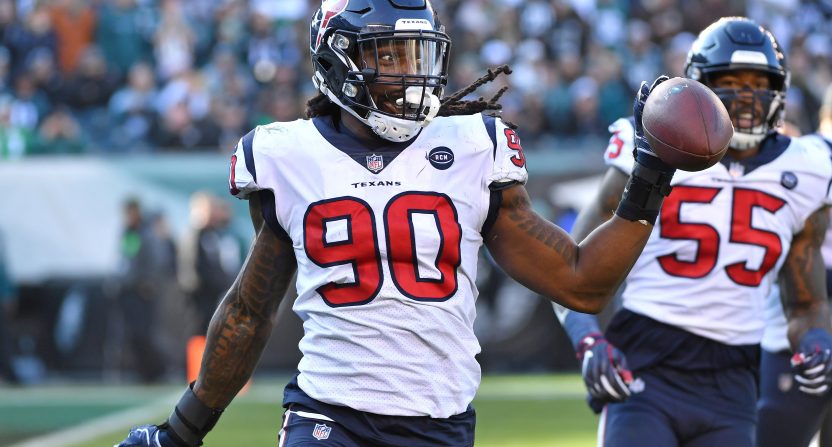 This offseason, the Houston Texans have made remarkable progress to try and be the most dysfunctional team in the NFL. The latest is that the Texans have traded Jadeveon Clowney to the Seattle Seahawks for a 2020 third round pick, Jacob Martin, and Barkevious Mingo. Unless that third rounder turns out to be a future hall of famer, the Texans really got the bad end of this deal.

Despite needing offensive line help, the Texans got two players on the defensive side of the ball. The Seahawks, on the other hand, should feel like they won a Super Bowl in August pulling off this deal. They get a player who is going to fit really well in their system and get rid of two players who weren’t really going to be a factor with the team and may have potentially been cut before the start of the season.

Some of this, in fairness, isn’t on the Texans. Clowney held a lot of leverage since he didn’t sign franchise tender. The Texans put the franchise tag on him but Clowney called the GM’s bluff, or whatever person is posing as the Texans GM these days. The Texans could’ve held firm and had a scenario like the Steelers had with Le’Veon Bell last year but in a scenario where they would’ve gotten nothing in return, the Texans at least got something. And if there is a silver lining, the Texans traded Clowney to an NFC team and won’t have to play against him that much. The bad part was that the Texans didn’t really get anything that would help the team. They really just ensured that they only have to play against him once every four years.

Even if one gives the benefit of the doubt to the Texans in this trade, the front office became a mess in a short period of time. They waited until over a month after the NFL Draft to fire general manager Brian Gaine and made a point to mention that an EEOC complaint about Gaine allegedly firing minorities and replacing them with non-minorities wasn’t a factor in firing Gaine. Then the Patriots accused the Texans of tampering to get director of player personnel Nick Caserio. That means there is currently no GM for the Texans, and GM duties are split among four Texans front office members.

After reading about that fiasco, what happened with Clowney makes total sense.