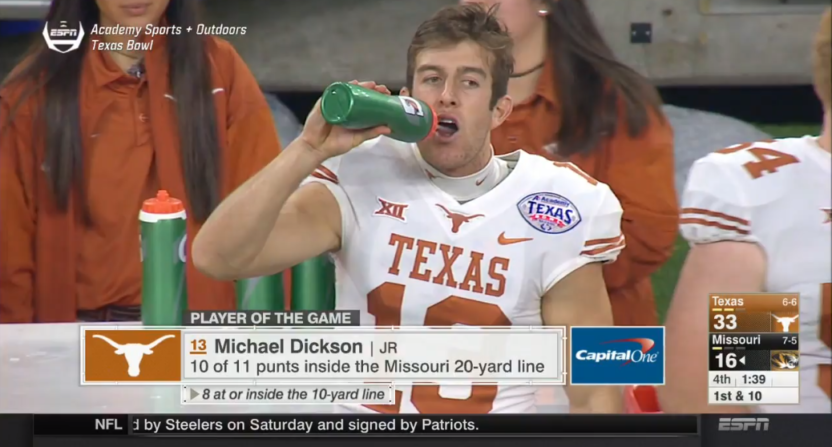 NFL organizations have been known to ask some very weird things to draft prospects during the interview process at the NFL Scouting Combine, but have you ever heard of a player being asked to do a staring contest?

That’s what Texas Longhorns punter Michael Dickson claims the Seattle Seahawks had him do this week in Indianapolis, according to Pro Football Talk.

“I had to see how long I could stare without blinking,” Dickson said. “I had a couple of attempts. I tried a few techniques, looking away from the light, trying to block any sort of wind coming into the eyes. That was a weird process.”

And he had to do staring contests, apparently.

Dickson says he had to do three staring contests after he didn’t pass the test in the first two tries. He finally figured out a “technique” to pass the test.

“The first time I did terrible,” Dickson said. “I only lasted for 14 seconds, but my third time I had figured out a technique to look around the room just to get your eyes a little watery, I guess.”

So… why are the Seahawks even bothering with this “drill”? Mental concentration? Even Dickson called it a “weird process.”

The Seahawks should at least already know that Dickson is excellent at the one skill that matters for his craft: punting footballs. Dickson was named Texas Bowl MVP after punting the ball inside the 20-yard line 10 times (this is in one game). I even broke down each punt.

Dickson is so good at punting that NFL.Com draft analyst Lance Zierlein thinks he could be drafted in the first three rounds, something that has happened with a punter just once over the last 10 years:

Dickson is the rare punter with good size, hands, touch, and power who is able to dig his team out of their own end zone and stick his opponents close to theirs. Over the last ten years, just one punter (Bryan Anger in 2012 to Jaguars) was taken inside the first three rounds but Dickson could be that guy this year.

You can debate about the value of a punter (like, if they should ever be drafted), but the the punter’s staring contest abilities definitely shouldn’t factor into the argument.