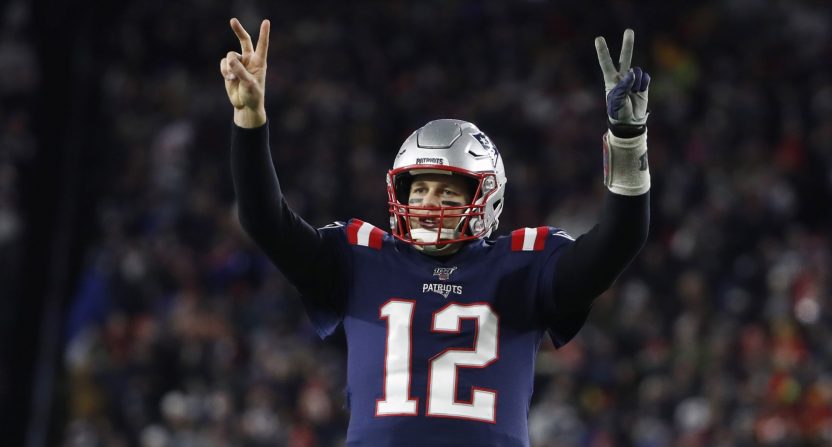 We’re just a few weeks removed from 2020. But before we close out a wild decade in America’s most popular sports league, we’re looking back at some of the best of the 2010s in the NFL.

Here’s a breakdown of the 10 best professional football players from the last 10 seasons.

Manning would rank a lot higher in the previous decade, but he was still MVP in 2013 and went to a pair of Super Bowls as one of the most consistently dominant quarterbacks between 2010 and 2015. He was a first-team All-Pro twice and a Pro Bowler four times.

The only player this decade with more than 100 sacks edges out Khalil Mack, who unlike Miller has won a Defensive Player of the Year award but doesn’t have the same level of sustained productivity. Miller has made seven Pro Bowls this decade, and nobody has more forced fumbles (26).

Brown beats out Julio Jones (he has better numbers and more accolades) and Adrian Peterson (who had several of his best seasons before 2010). He leads all wide receivers with 75 touchdowns this decade and put together a ridiculous six consecutive seasons with more than 100 catches, more than 1,200 yards, and at least eight touchdowns.

The five-time Pro Bowler went over 1,000 yards in four separate All-Pro seasons and was probably the biggest offensive matchup nightmare of the decade. He scored an insane 79 touchdowns in 115 games and added 1,163 yards and 12 touchdowns in 16 playoff games. He’s one of the most uniquely dominant players in league history.

Among 47 quarterbacks with 1,000 pass attempts this decade, only Patrick Mahomes has a higher passer rating than Rodgers, who was MVP in 2011 and 2014 and was Super Bowl MVP in 2010. His decade is a little front-heavy, as he’s been a lot less effective in recent seasons, but he was clearly the best quarterback in the game for several full campaigns.

The five-time first-team All-Pro and six-time Pro Bowler was Defensive Rookie of the Year in 2012 and Defensive Player of the Year in 2013. He’s likely to earn his seventh Pro Bowl nod in as many seasons this year. Kuechly is easily the best non-pass-rushing defensive player from the 2010s.

He was a Pro Bowler every year between 2010 and 2016 before retiring following an abbreviated 2017 season. What’s also amazing is the six-time first-team All Pro (he earned five of those nods this decade) played an insane 10,363 consecutive snaps. He’s one of the greatest offensive linemen of all time. It’s just a shame he never had any support in Cleveland.

He’ll likely tie Luke Kuechly, Joe Thomas, and J.J. Watt with five first-team All-Pro nods this decade, but those other guys were around since 2012, 2010, and 2011, respectively. Donald missed the first three seasons of the 2010s but still ended up with a better résumé than any other defensive player except Watt. He has a shot at a third Defensive Player of the Year award this season.

He was a first-team All-Pro in five of this decade’s 10 seasons, he won Defensive Player of the Year in 2012, 2014, and 2015, and only fellow 2011 first-round pick Von Miller had more sacks than his 96 in the 2010s. Until recently passing the baton to Donald, Watt was the face of defensive dominance this decade.

He’ll likely fall short of making a perfect 10 Pro Bowls this decade because he’s experiencing a terrible season. Still, Brady, Manning, and Rodgers are the only quarterbacks with multiple first-team All-Pro nods this decade. But that doesn’t scratch the surface. Brady was also league MVP twice (2010 and 2017), Super Bowl MVP twice (2014 and 2016), and he’s led the Pats to six Super Bowls in the first nine seasons of this decade.