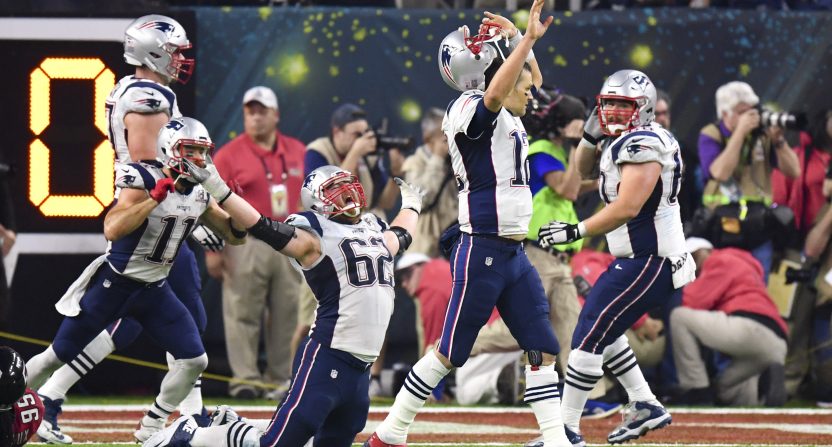 Before we close out a wild decade in America’s most popular sports league, we’re looking back at some of the best of the 2010s in the NFL.

Here’s a breakdown of the 10 best professional football teams from the last 10 seasons. (And no, they’re not all Super Bowl winners. Deal with it.)

This New England team loses points for winning “only” 12 regular-season games and falling short of the Super Bowl, but their first three losses came by a combined four points. They outscored their opponents by a decade-best 14.1 points per game, and they were one of just three teams this decade with a plus-25 turnover differential. They were dominant in pretty much every phase of the game, but they laid an egg against the Baltimore Ravens in the playoffs.

Led by MVP Tom Brady, the 2010 Pats went 14-2 while posting the best turnover margin and the fourth-best scoring margin in the NFL this decade. They had the league’s No. 1 offense and a top-10 defense, but they also laid an egg in the playoffs. Yeah, two of the best Patriots teams in history didn’t even play in the Super Bowl, which is downright scary.

It sure looked like they were going to repeat as Super Bowl champions after losing just one game all season (by five points on the road). These Packers were one of just five teams to outscore their opponents by 200 or more points this decade, and one of just four with a turnover margin of greater than 20. But they were one-and-done in the playoffs.

Another victim of the 2011 Giants, this 49ers team was unbeatable defensively and could have easily been 15-1 instead of 13-3. They had a tied-for-decade-best plus-28 turnover margin and they surrendered just 14.3 points per game.

They were better than the Denver Broncos team that beat them in the Super Bowl. In fact, they’re the only team this decade to win 15 games and a conference championship. They’re one of just four teams to outscore their opponents by 12 or more points per game and register a plus-20 turnover differential, and the only one of those four to go to the Super Bowl. This really was a special season for MVP Cam Newton and Coach of the Year Ron Rivera. They were nearly perfect. Too bad they blew it.

These Giants were just a wild-card team with a 9-7 record, but they have to make the list because of what they did in the playoffs. Big Blue won three consecutive postseason games against teams that all could’ve made (or did make) this list — the 15-1 Packers, the 13-3 49ers, and the 13-3 Patriots. Are you kidding me?

Both teams that slayed the Goliath Patriots in a Super Bowl this decade deserve some love. But even before doing so (with a backup quarterback!), this Eagles team was historically awesome. They ranked in the top-five on both sides of the ball in a 13-win season.

They may have no-showed for the Super Bowl, but up until that point this Broncos team might have been the best of the decade. The highest-scoring team in NFL history lost just two games by one score each (one in overtime to New England), and nine of their 14 wins came by 16 or more points. It was Peyton Manning at his absolute best.

They went 13-3 and won the championship with one of the most famously kick-ass defenses in NFL history, and their three losses all came by only one score each before they destroyed one of the best teams of the decade in the Super Bowl.

The 14-2 Super Bowl champions get extra points for their unprecedented comeback against Atlanta. They had a top-three offense and a top-three defense, and they outscored their opponents by the fifth-highest margin this decade. And those numbers would have been even better had Brady not been suspended for the first four games of the season.