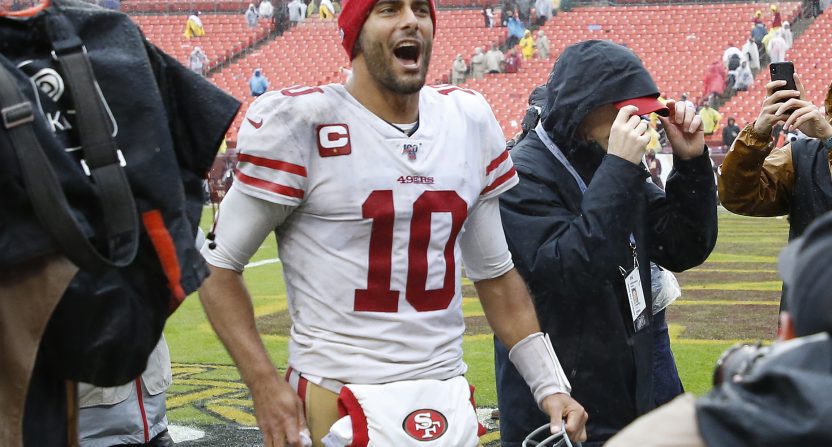 The NFL trade deadline has become a thing again. For about a quarter-century, it really wasn’t. And while we’re still not seeing deadline blockbusters like we did in the late-1980s, the deadline has been a lot busier in recent years than it was for the first decade-plus of the 21st century.

Ahead of this year’s Oct. 29 deadline, let’s look at the top 10 deadline deals in NFL history.

They only got a sixth-round pick back from Gang Green, but kudos to the Seahawks for their prescience here. The troubled 2009 first-round pick caught two touchdown passes the rest of his NFL career.

Dallas embarrassingly sent Detroit a first, a third, and a sixth for Williams, who caught just 19 passes in 10 games with the team that season and never made a Pro Bowl with the Cowboys. Detroit didn’t do much with those draft picks, but the haul was still impressive.

The 49ers gave up a second-round pick for Jimmy G, who has won 12 of his 14 starts since moving from New England to San Francisco. That’s yet to pay off in the playoffs, but it looks like that might change. In Garoppolo’s first full season with the team, the 49ers are off to a 6-0 start.

For the price of a fourth-round pick, New England added a star cornerback who was an immediate starter that year and went on to make the Pro Bowl with four interceptions in 2013. Not bad considering they also got a seventh-rounder back from the Bucs.

The 2016 Pro Bowler cost the Eagles a fourth-rounder midway through their first and only Super Bowl campaign. He played a key role down the stretch and throughout January, compiling 254 scrimmage yards in three playoff games.

“Booger” also helped a team win the Super Bowl after a mid-season trade from a bad Florida team. The Colts sent Tampa Bay a second-round pick for McFarland, who recorded 4.5 sacks in 14 games with Indy, including one at a critical moment in the team’s Super Bowl XLI victory over the Chicago Bears.

New England sent a sixth-round pick to Detroit for Van Noy and a seventh-rounder, which basically means they got him for free. Unbelievable considering the impact Van Noy has made on one of the best defenses in NFL history this season. He’s been a superb starter in Bill Belichick’s defense for three years running. But at least the Lions got to use that sixth-rounder on Brad Kaaya.

In a three-way trade that involved Eric Dickerson and the Los Angeles Rams, the Bills surrendered three high draft picks in order to secure the rights to Bennett after the 1987 No. 2 overall pick couldn’t work out a contract with the Colts. But none of the players selected with those picks amounted to much, while Bennett was a Pro Bowler on all four Buffalo Super Bowl teams in the early 1990s. He was an elite starter with the Bills for almost a full decade.

Seattle surrendered just two middle-round picks for Beast Mode, who was solid in Buffalo before really taking off with the Seahawks. Lynch made four consecutive Pro Bowls in Seattle and was a critical piece when the team went to back-to-back Super Bowls in 2013 and 2014.

Known as “The Great Train Robbery,” it’s probably the most famous fleecing in NFL history. Walker spent just two and a half years in Minnesota and never made another Pro Bowl, while the Cowboys used the bounty of draft picks they got from the Vikings to build a dynasty. Walker was sent packing along with four middle-to-late-round draft picks, while Dallas received five veteran players and eight draft picks, three of which were first-rounders and three of which were second-rounders. Without that deal, the Cowboys probably don’t end up with Emmitt Smith, Darren Woodson, or Russell Maryland.