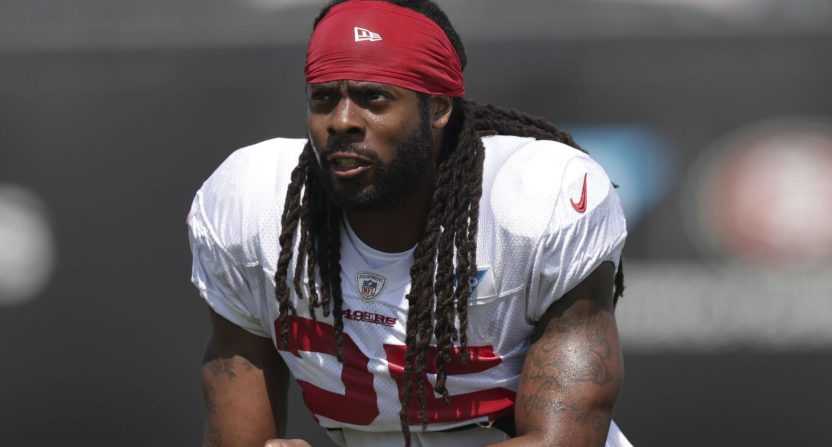 March is synonymous with free agency in the NFL. That month might be behind us, but plenty of extremely talented, starting-caliber players with strong résumés remain available on the open market as “draft month” takes off.

Here’s a look at the top 10 guys lingering on the market, with a huge emphasis on former members of the Kansas City Chiefs:

10. CB Casey Hayward Jr.: He’s 31 and showed signs of decline last season, but the two-time Pro Bowler was still by no means a liability. He’s solid, his experience is valuable, and he was a standout just a year or two ago. In the right scheme, he could still be a critical piece.

9. CB Brian Poole: The 28-year-old is coming off a knee injury and has some Jets stink on him, but he’s given up fewer than 7.5 yards per target in each of his last three seasons. Opposing quarterbacks posted a passer rating of just 61.6 on throws into his coverage in a small sample in 2020.

8. OT Alejandro Villanueva: He’s 32 now, but the two-time Pro Bowler hasn’t missed a start on Ben Roethlisberger’s blind side since he was a sophomore in 2015. That late start to his career should mean there’s plenty of tread on his tires.

7. Edge Jadeveon Clowney: His lack of finishing power as a pass-rusher is again limiting his market, but the former No. 1 overall pick is a three-time Pro Bowler with strong playmaking ability at the prime age of 28. He could still get back on track and become a stud again.

6. LB K.J. Wright: The grizzled 31-year-old has 140 starts under his belt and has been a Pro Bowler and a champion. He doesn’t appear to be slowing down after one of the best seasons of his career.

5. C Austin Reiter: The steady 29-year-old gave up zero sacks and took zero penalties on 867 snaps in 2020, according to Pro Football Focus.

4. OT Eric Fisher: It’s hard to believe a stalwart left tackle like Fisher is still chilling on the open market. Sure, he’s coming off a major knee injury, but he was a Pro Bowler as a 29-year-old in 2020.

3. CB Bashaud Breeland: A starter the last two years with the Super Bowl Chiefs, Breeland doesn’t get enough credit for his strong coverage skills. He’s surrendered a sub-90 passer rating into his coverage each of the last two seasons.

2. OT Mitchell Schwartz: He’s on the verge of 32 and coming off a back issue that cost him most of the 2020 campaign, but Schwartz was an absolutely dominant and durable right tackle between 2016 and 2019. He could easily bounce back and crush it at a position with long shelf lives.

1. CB Richard Sherman: He might be 33 now, but the five-time Pro Bowler is just a year removed from a shutdown campaign in which he intercepted three passes for a Super Bowl team.