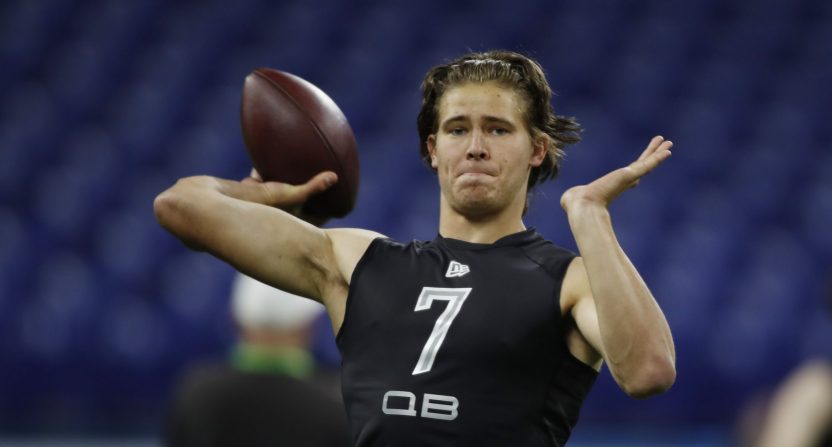 The virtual NFL offseason is in full swing. Eventually, it might become something other than virtual, paving the way for some spicy positional battles based on developments from free agency and the 2020 NFL Draft.

Focusing on the offensive skill positions, here are 10 potential competitions to watch.

Los Angeles Chargers QB: Justin Herbert vs. Tyrod Taylor — The Bolts have talked up Taylor, but their actions were louder than their words when they used the No. 6 overall pick on Herbert. The former is an ideal bridge quarterback for a team that might want to give the latter time, especially with limited in-person offseason activity. Still, it’s only a matter of time for Herbert.

Buffalo Bills RB: Devin Singletary vs. Zach Moss — It’s a battle between two young third-round picks, the first of whom averaged 5.1 yards per carry as a rookie, and the second of whom is coming off three consecutive 1,000-yard seasons in the Pac-12. With Frank Gore gone, there’s a lot on the line.

Indianapolis Colts RB: Marlon Mack vs. Jonathan Taylor — Mack has become the man in Indy, but Colts general manager Chris Ballard wouldn’t have used a high-second-round pick on Taylor unless he had big plans for the Wisconsin product. They’re pretty similar backs.

Detroit Lions RB: Kerryon Johnson vs. D’Andre Swift — Similar deal here, as the Lions drafted Swift early in Round 2 despite Johnson’s presence. The Georgia product is a little more versatile than Johnson, but Bo Scarbrough and Ty Johnson could also complicate matters.

Tampa Bay Buccaneers RB: Ronald Jones vs. Ke’Shawn Vaughn — Jones started to come on late in his sophomore season, but that didn’t stop the Bucs from using a third-round pick on Vaughn. The two are different players, but one will emerge as Bruce Arians’ favorite. Could Jones become Tom Brady’s James White while Vaughn becomes his Sony Michel? It’s possible.

Denver Broncos RB: Phillip Linsday vs. Melvin Gordon vs. Royce Freeman — Freeman was a third-round pick in 2018, Gordon is a high-profile free-agent addition, and the undrafted Lindsay has been their best running back the last two years. This could get crazy if Freeman finally starts to deliver.

Cincinnati Bengals WR: Tee Higgins vs. John Ross III — With A.J. Green outside (assumimg he’s healthy) and Tyler Boyd primarily in the slot, there will be an opportunity for either Higgins or Ross to win the lion’s share of the work opposite Green outside. Both were highly touted coming out of college, but Ross has thus far failed to live up to expectations.

Denver Broncos WR: DaeSean Hamilton vs. KJ Hamler — It looks as though Drew Lock has his two go-to outside receivers in Courtland Sutton and Jerry Jeudy, but that likely leaves Hamilton battling rookie second-round pick Hamler for most of the work in the slot. If there’s a leash at all on Hamilton, it will be short.

San Francisco 49ers WR: Everybody — Even with Emmanuel Sanders and Marquise Goodwin gone, the addition of rookie first-rounder Brandon Aiyuk to go with a return to health for Trent Taylor and Jalen Hurd could make for a wild competition between those three and Deebo Samuel, Kendrick Bourne, and Dante Pettis.

Tampa Bay Buccaneers TE: O.J. Howard vs. Cameron Brate — One of these two will team up with Rob Gronkowski, while the other will either be traded or forgotten about. No pressure.