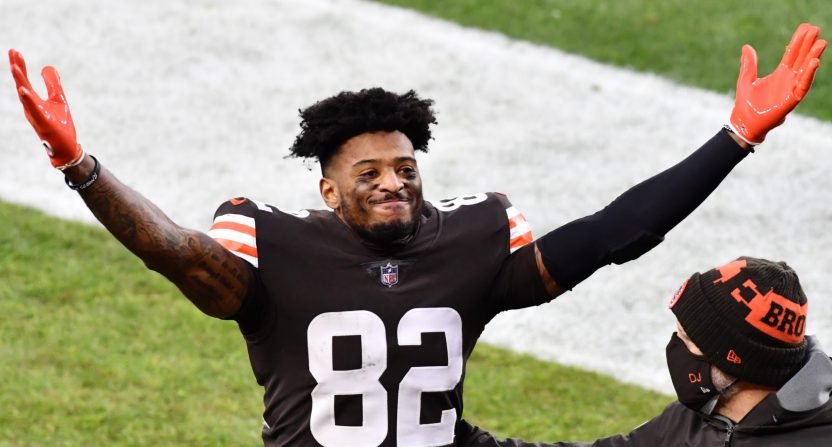 With NFL free agency just around the corner, let’s preview the looming market with a look at 10 impending free agents who deserve more credit than they’ve been getting early this offseason.

Cleveland Browns WR Rashard Higgins: He was often overshadowed in the Cleveland receiving corps, but the 26-year-old quietly averaged 11.5 yards per target in 2020. That’s the second-highest qualified mark in the NFL. At this point, he might be a better investment than Odell Beckham Jr.

Carolina Panthers OT Taylor Moton: The 26-year-old former second-round pick has been a steady, durable starter at a key position the last three years. The Panthers likely won’t let him get away.

Kansas City Chiefs C Austin Reiter: Nobody talks about the guy who snapped Patrick Mahomes the ball the last few seasons, but the 29-year-old gave up zero sacks and took zero penalties on 867 snaps in 2020.

Arizona Cardinals edge Haason Reddick: The 2017 first-round pick’s body of work might not earn him a big contract because he was so underwhelming in his first three and a half seasons. But his trajectory is extremely promising after he put up 10.5 sacks in his last 11 games of 2020.

Baltimore Ravens edge Yannick Ngakoue: Because Ngakoue has bounced around so much of late, there might be a perception that he’s disposable. The reality is he’s a game-changer who has forced more fumbles in the last five years (18) than anyone else in football except Khalil Mack. And he’s still only 25 years old.

Cincinnati Bengals edge Carl Lawson: Because Lawson’s sack numbers don’t jump out at you, he might not get as much love as fellow free-agent pass-rushers like Shaquil Barrett and Bud Dupree, or even Reddick or Trey Hendrickson. But he and T.J. Watt were the only players in football to record more than 30 quarterback hits in 2020, and he’s also only 25.

New Orleans Saints S Marcus Williams: One of the best deep patrollers in football, the 24-year-old Williams has 13 interceptions in four seasons, but no Pro Bowls on his record.

New York Jets S Marcus Maye: Removed from the shadow of Jamal Adams, Maye’s numbers as a pass-defending free safety skyrocketed as he became a force in 2020. The league is a little behind on the 2017 second-round pick.

Los Angeles Rams S John Johnson III: Ditto for Johnson, who surrendered a comically low 4.4 yards per attempt in coverage and was a force in pretty much every phase of the game during a breakout age-25 season. Teams should strongly consider these guys instead of the older Justin Simmons and potential one-year wonder Anthony Harris, both of whom are getting more hype at the safety position.