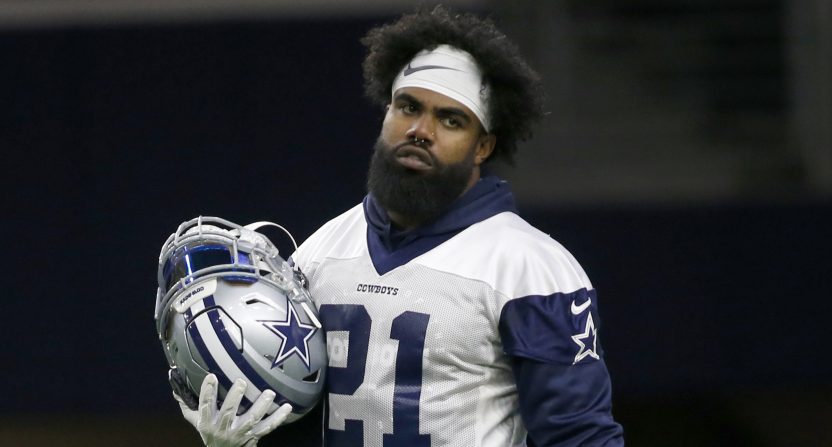 We’re deep into fantasy football draft season, which means you’re going to have to weigh risk and potential reward time and again over about a two-hour period. Which fantasy players carry the most risk entering the 2019 NFL campaign? Here are 10 who are far from safe.

The league’s reigning rushing champion is a top-five pick under regular circumstances, but he continues to hold out and it appears there’s a very real chance he’ll miss at least a hearty portion of the season. No way you can justify drafting him ahead of Saquon Barkley, Alvin Kamara or Christian McCaffrey, and I’d think twice about taking him before Le’Veon Bell, DeAndre Hopkins, Davante Adams or Michael Thomas.

Mahomes is going in Round 2 in most drafts, while no other quarterbacks are typically coming off the board until Round 4. That’s a hell of a leap. Will Mahomes be the best quarterback in fantasy football again? Possibly, but will he be that much better than Deshaun Watson and Aaron Rodgers? Probably not. The gap between him and the rest of the passers will likely shrink as the league catches up to him in his second full season as a starter. I wouldn’t take him until the third round.

Again, when the difference between Luck and Watson, Rodgers, Baker Mayfield, Matt Ryan, Drew Brees, Russell Wilson, Jared Goff and Cam Newton isn’t likely to be significant, why risk it with Luck? His status for Week 1 is now very much in doubt. I don’t trust his body in the recovery process, and I don’t trust information shared by the Colts. Stay away until we have more clarity on this calf/ankle situation.

I’m more confident that Gordon’s holdout will end soon than I am that Elliott’s will, mainly because Gordon lacks leverage in a comical way. That said, the fact that he’s still not out there is a concern, as is the fact the Bolts seem convinced they’ll be just fine with Austin Ekeler and Justin Jackson in the backfield. Those two could start eating into Gordon’s carries even if/when he returns, which makes it tough to draft him in the first two rounds. I wouldn’t touch him until well into Round 3.

Even if you set aside concerns about his off-field behavior, concerns about his frostbitten feet, concerns about his helmet and concerns about his transition to a less-talented offense than the one he had in Pittsburgh, the fact is Brown saw his yards-per-game average plummet from 109.5 in 2017 to 86.5 in his age-30 season. I think he’s beginning to decline, and when you toss in all those other concerns it might be better to take someone like Adam Thielen, Keenan Allen or T.Y. Hilton in that range.

Even before Bell sat out an entire season, his numbers sank in 2017. It’s fair to wonder if he was running out of gas, and if he’ll continue to slow down while also exhibiting rust from a year away. He’s also part of an inferior offense to the one he had around him in Pittsburgh. Unless you’re getting late-Round 1 value, he might not be worth it.

That’s a high freakin’ ADP for a third-year fifth-round pick with one good season under his belt at the tight end position. I get it, Kittle had an historically productive sophomore season, but a ridiculous 870 of his 1,377 yards came after the catch, and that probably isn’t sustainable. Throw in that he’ll be working with a new quarterback and you might want to check yourself before drafting Kittle in Round 3.

Johnson’s 2016 All-Pro season might have been an anomaly. He was also decent in a small sample in 2015, but the 27-year-old has averaged just 3.6 yards per carry since that breakout campaign. His ADP indicates people are draftin him with the assumption that he’ll finally bounce back, but he was healthy last year and his numbers were still ugly. Taking him in the top 10 in a big risk.

I wouldn’t touch Gurley until late in Round 1, but he’s at least relatively healthy right now, and there’s no holdout in play. That’s what makes him less risky than Elliott. If you draft him in the middle of Round 1, the key will be to make sure you add Darrell Henderson and possibly even Malcolm Brown as handcuffs.

The undrafted second-year back will have to avoid a sophomore slump after missing part of what should have been his first full NFL offseason due to a wrist injury. You just know that the Broncos are going to give 2018 third-round pick Royce Freeman every opportunity to prove he can be the guy, and the hype machine has been working hard for Freeman this offseason. I’d feel better taking Freeman in Round 6 than Lindsay in Round 4 or 5.