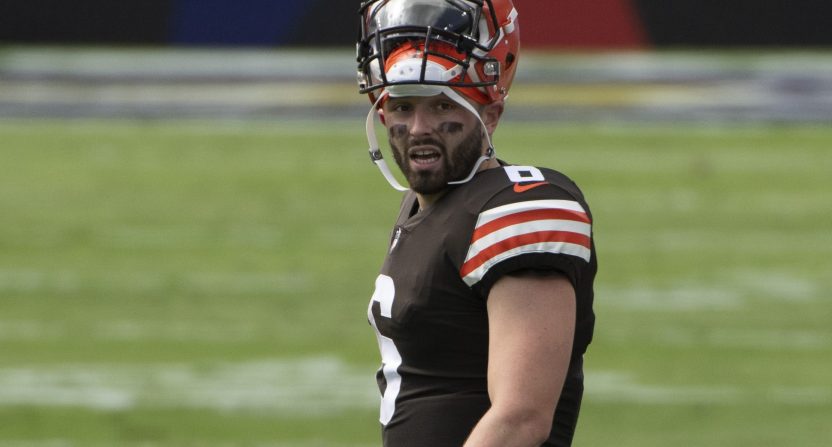 Okay, maybe some of us are mad. After many fans spent an offseason hyping the following players, they fell on their faces in the first week of the 2020 NFL season. Can any of them bounce back?

Cleveland Browns QB Baker Mayfield: The 2018 No. 1 overall pick was supposed to bounce back with more support and the presence of new head coach Kevin Stefanski in Year 3, but he couldn’t have gotten off to a worse start against the stacked Baltimore Ravens defense. Mayfield’s 65.0 passer rating ranks ahead of only Ryan Fitzpatrick.

New York Jets QB Sam Darnold: In a similar spot but with even less rope considering his problems in his first two seasons, the 2018 No. 3 overall pick dinked and dunked, but still put up mediocre numbers in a deflating season-opening loss to the Buffalo Bills. The leash might not span beyond this season.

Detroit Lions QB Matthew Stafford: Stafford was one of the five highest-rated passers in the league before going down with a back injury midway through the 2019 season, which had many believing he could finally put it all together for the Lions in 2020. That could still happen, but a sub-60 completion percentage and a sub-80 passer rating in a Week 1 collapse against the Chicago Bears is not a good omen. Still, we’re not ready to give up on the 32-year-old.

Indianapolis Colts QB Philip Rivers: Same old Phil, who in his first-ever game as a non-Charger threw a killer interception late in a close game to cement a loss against an inferior opponent. That’s his forte, and at this point it’s hard to argue the 38-year-old can change.

Tampa Bay Buccaneers QB Tom Brady: Meanwhile, it’s becoming harder to argue Brady can revive his career at 43. He was one of the lowest-rated passers in football during the second half of his age-42 season, and he threw a pair of interceptions in his Bucs debut as Tampa Bay was easily defeated by the New Orleans Saints. He’s just about toast.

Los Angeles Rams RB Cam Akers: There was some buzz that the rookie second-round pick could become a fantasy star right off the bat with Todd Gurley gone, but instead Malcolm Brown carried the Rams’ backfield as Akers gained a mere 39 yards on 14 carries. We’ll give him a few more weeks, but he and a lot of other rookies might be starting further behind than usual.

Buffalo Bills RB Devin Singletary: The path was/is clear for the 2019 third-round pick to explode in a featured role as a sophomore, but Singletary gained just 30 yards on nine carries in a victory over the Jets. But rookie Zack Moss was even less productive, so we’ll see.

Arizona Cardinals WR Christian Kirk: The Cards moved on from Hakeem Butler, and it was easy to figure Kirk could gain plenty of opportunities with DeAndre Hopkins and Larry Fitzgerald hogging so much attention. And he was indeed targeted five times in the opener, but the third-year second-round pick made just one catch for zero yards. No bueno when there are so many other options in that offense.

Cleveland Browns edge Myles Garrett: Garrett had a tackle for loss and a quarterback hit against the Ravens, but the Browns need one of the league’s most talented defensive players to do more against an offensive line like Baltimore’s, which wasn’t in great shape entering Week 1. That was far too quiet.

Minnesota Vikings edge Yannick Ngakoue: Just days after he was acquired in a trade from the Jacksonville Jaguars, the play-making machine was a complete ghost in a brutal loss to the Green Bay Packers. We’ll give him a pass based on that timeline, especially with Danielle Hunter injured.

Arizona Cardinals LB Isaiah Simmons: The highly-touted rookie No. 8 overall pick was at least partially responsible for a pair of touchdowns in coverage during a brutal inaugural game in which he was also penalized for a horse-collar tackle. Again, it’s going to take a lot of these rookies more time than usual after a limited offseason and no preseason.