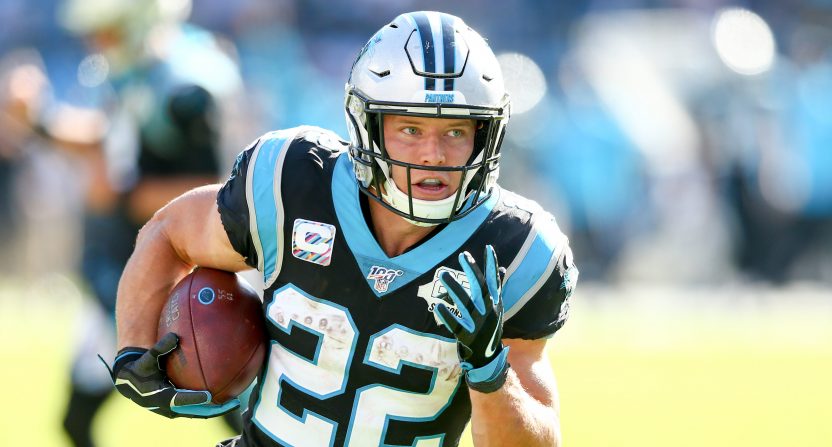 As the second half of the 2019 NFL season gets underway, here’s a look at the 23 position players currently on the inside track to become first-team All-Pros.

The league’s highest-rated passer is running away with MVP honors. He’s thrown 22 touchdown passes to just one interception. He’s at least a level above every other quarterback in the NFL right now.

The 23-year-old leads the NFL with 1,244 scrimmage yards and 13 touchdowns, which isn’t far off of a record-breaking pace entering the second half of the season.

Thomas leads the league in receptions and receiving yards, despite the fact he hasn’t had a healthy Drew Brees at quarterback. He’s on pace to catch a record 146 passes, while Evans has similar receiving stats and is tied for the league lead with seven touchdown grabs.

Only Cook and McCaffrey have more than 1,200 yards from scrimmage. They’ve been the centerpieces of successful offenses, which is incredibly rare at that position in this day and age.

You could make an argument for Austin Hooper of the Atlanta Falcons, who has more catches and touchdowns than Kelce, but the 30-year-old still has a yardage edge over every other tight end in the league. He’s also been more consistent and is part of a better offense.

The dominant pass-blocker has yet to give up a sack despite the quarterback changes in New Orleans. He’s a big reason the Saints keep winning, even though they’ve been without Brees and Alvin Kamara.

He’s become the best run-blocker in the league, period. He also hasn’t given up a sack.

A recent ankle injury has held him back, but the 30-year-old has still been the steadiest all around player at a position that is thin across the league.

The 2018 All-Pro has given up zero sacks and taken just two penalties. He’s without a doubt the best right tackle in the league.

Barrett leads the NFL with 10.5 sacks, giving him a shot at Michael Strahan’s single-season record of 22.5. But Watt is tied for the league lead with 31 quarterback pressures and 20 quarterback hits, which combined with three forced fumbles is enough to beat out Myles Garrett of the Cleveland Browns.

Donald hasn’t been quite as dominant as in years passed, but he’s still a jaw-dropping disruptive force who crushes it in both pass and run defense and has big numbers yet again. But Campbell has actually been better on paper. The 2017 All-Pro has 16 quarterback hits and the best run-stopping grade among qualified defensive tackles at PFF.

Opposing quarterbacks have just a 45.1 passer rating when throwing at Gilmore, who truly has separated himself from the cornerback pack in 2019. He’s also got three interceptions, as does Sherman, who has similarly dominant numbers in coverage in a hell of a bounce-back season. He’s giving up just 0.6 yards per cover snap.

Byard is an interception machine who rarely gets burned in coverage and is quietly superb against the run as well. He might be the league’s best all-around safety. Harrison also does a little bit of everything and rarely makes mistakes.

It seems like every week he’s facing a superstar receiver. And every week, he essentially shuts them down. The numbers aren’t quite there yet and he could use more support, but the third-year Central Florida product has become a coverage star.