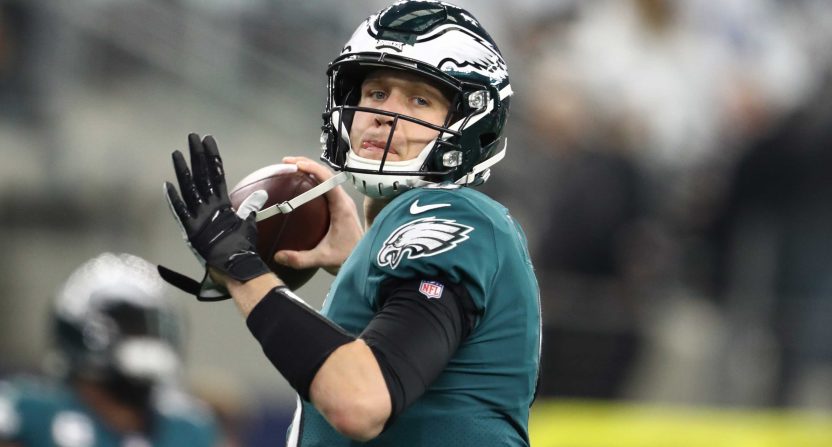 Nick Foles is the reigning Super Bowl MVP. On Sunday, he severely outplayed 2018 league-wide MVP candidate Jared Goff in a season-saving road victory over the juggernaut Los Angeles Rams. But Foles remains the No. 2 guy for the Philadelphia Eagles, who don’t appear to be losing faith in injury-prone franchise quarterback Carson Wentz.

That likely means Foles is going to reach free agency in March, and when that happens he should be in for a mouth-watering payday courtesy of a team in search of a new starter under center.

Here are the five candidates that make the most sense.

Ryan Tannehill might be putting together the highest-rated season of his career, but it hasn’t been enough for a Dolphins team that is still likely to fail to win a playoff game for the 18th consecutive year. Tannehill has missed 24 games in the last three seasons alone, which could make it hard for Miami to justify swallowing his $26.6 million salary cap hit in 2019. They could reduce that number by nearly $19 million by cutting him, and they’ve got the cap space to bring in Foles as a replacement. It just makes sense for a team that might be looking for something new.

The Jaguars are more likely to give up on their current quarterback in the new year than Miami is, and Jacksonville is also closer to contender status than the Dolphins. So money aside, they make the most sense. But believe it or not, the Jags have spent so much cash in recent offseasons that it’ll be hard for them to win a bidding war for a quarterback like Foles. According to Spotrac, only the Eagles are projected to be in a bigger cap hole come March, and cutting Blake Bortles would cost them $16.5 million. Still, he’s the kind of quarterback who could put the Jaguars over the top before their championship window closes

On the surface this might seem like a longshot because the Bengals despise spending money and rarely give up on their own players. But if owner Mike Brown decides to make major changes following a third consecutive losing season, he certainly has the salary-cap space to bring in a quarterback like Foles. There’d be a lot of potential with Foles throwing to A.J. Green and handing off to Joe Mixon. Current starter Andy Dalton has regressed in recent years, and the Bengals can save more than $16 million by cutting Dalton after the season.

A seemingly frustrated John Elway might already be willing to give up on Case Keenum after just one season, which could cause an also-seemingly-impatient Elway to pull the trigger on a veteran like Foles or Joe Flacco. I could see Elway valuing the fact that both of those of those players have Super Bowl MVP awards on their respective résumés, and the fit wouldn’t be bad because the Broncos roster isn’t far from being good enough to contend.

There’s an admittedly outside chance that this is it for Tom Brady. And if Brady were to hang ’em up after this season, the Pats probably wouldn’t be willing to jump right into rebuild mode. Instead, a veteran like Flacco or Foles could make sense. And I think they’d be more willing to go with the younger, more recently successful quarterback who beat them in Super Bowl LII.