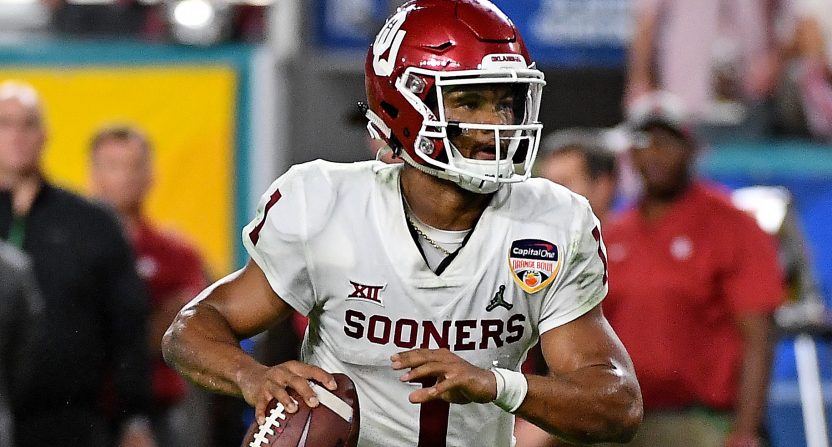 Now that quarterback/outfielder Kyler Murray has decided he either wants to be an NFL quarterback or wants to leverage the Oakland Athletics and all of his NFL suitors by ginning up a bidding war for his services, it’s time to get at least semi-serious about the almost-5-foot-10 21-year-old’s football prospects.

If he really is committing to play for the NFL, where might he land in the world of professional football? Here are five teams that make the most sense, ranked from worst fit (of the best) to best fit.

The Jags offense isn’t exactly tailor-made for a dual-threat quarterback like Murray, but the fact is Jacksonville needs a replacement for Blake Bortles and Murray’s presence could force that unit to evolve under new coordinator John DeFilippo. He’d certainly be well-supported by that defense, and having Leonard Fournette in the backfield doesn’t hurt.

Jon Gruden has suggested he’s trying to be less stubborn about what he sees as a prototypical quarterback and this would be a hell of a way to make that clear while also making a splash. Murray could be the face of the Raiders franchise, which would be ironical as they’re about to move from Oakland to Las Vegas next offseason. Though we’re guessing A’s fans wouldn’t see it as irony.

Pat Shurmur isn’t exactly new-school when it comes to outside-the-boxes ideas or players, but the Giants have the top-end personnel to accommodate a tiny dude like Murray. They like their quick, short passes, Odell Beckham makes life easier for everyone on offense, and Saquon Barkley’s presence doesn’t hurt either. Plus, in New York, Murray would have time to adjust while Eli Manning embarks on his inevitable 2019 goodbye tour.

In Denver, Murray would also have at least a year to sit back and be groomed while the Broncos play Case Keenum. That alone makes him a nice fit, even if John Elway would probably prefer a big, strong, stereotypical signal-caller. The Broncos probably aren’t married to one system under new offensive coordinator Rich Scangarello, and they’ve got a strong offensive line, a good group of running backs and a solid defense in support of whoever is under center.

The defending Super Bowl champions are the smartest team in football, maybe even in professional sports. They’re innovative and creative and they know how to get the most out of their personnel. If they decide they want to make Murray work despite his lack of height, they’ve got a shot. And with Jimmy Garoppolo and Jacoby Brissett both gone, they’re in desperate need of a potential heir apparent for Tom Brady, presuming he does retire eventually.