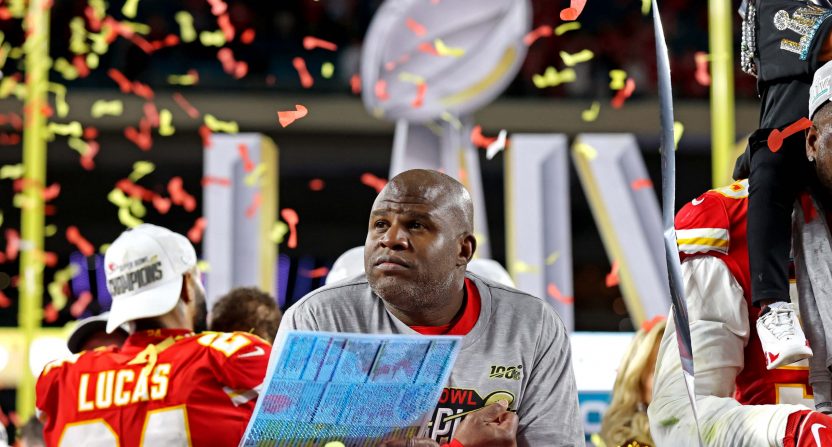 NFL training camps are scheduled to open next month. Here’s a look at some of the most intriguing assistant coaches:

Jack is back. The former Jacksonville Jaguars and Oakland Raiders head coach has returned to the NFL. New Washington coach Ron Rivera brought in Del Rio to work with one of the worst defenses in the league. Washington was sixth-worst in yards allowed per game (385.1), second-worst in rushing yards (146.2), and sixth-worst in points (27.2). Del Rio has been a successful coordinator before. Three times his teams have finished in the top three in total yards.

Del Rio left a cushy job as analyst for ESPN. Was he bored? Did he miss the league that much? Even if he does a good job with Washington, it’s doubtful that another owner would take a chance on him as a head coach. But maybe a college program might down the road. Del Rio, a USC alum, has been rumored as a possible Trojans candidate if the school parts ways with Clay Helton after the 2020 season.

There will be no legitimate reason for Bieniemy not to get an NFL job offer after this season. He’s a key part of a staff that just won the Super Bowl. That’s more than what his predecessors did. The Chiefs could have the best offense they’ve had in the Patrick Mahomes era – and that’s saying a lot. All their weapons return, plus they’re adding first-round pick Clyde Edwards-Helaire to the backfield.

Don’t you wish your boss valued you the way the Patriots feel about Josh McDaniels? McDaniels left that organization twice and was rehired twice. He bolted for the Denver Broncos head coaching job and was fired after two seasons (2009-10). He bolted for the Indianapolis Colts head coaching job in 2018, but quickly changed his mind and returned to New England. That tells you all you need to know about what Bill Belichick thinks of him.

McDaniels is the presumptive heir apparent whenever Belichick retires. This season will be his greatest challenge because Tom Brady is gone. The Patriots will try to win their 12th straight AFC East crown with either unproven Jarrett Stidham or journeyman Brian Hoyer behind center. Good luck with that. There’s a chance that the long-term solution QB isn’t on the current roster. What will McDaniels do with the worst QB situation the franchise has had since 1992?

Perhaps no one is in a better position to use the 2020 season as a springboard to a head coaching job than Moore. He’s young. He’s bright. He works for the most high-profile team in the league. And the Dallas Cowboys are loaded with young offensive talent. If new head coach Mike McCarthy doesn’t get in the way, Dallas should have one of the league’s top offenses.

Moore was promoted from quarterbacks coach after the Cowboys fired Scott Linehan after the 2018 season. In his first year of calling the plays, Dallas was a completely different team. It went from an Ezekiel Elliott-driven offense to a Dak Prescott-driven offense. The Cowboys set a franchise record with 6,904 yards and Prescott enjoyed a career season. That offense should be even better with the addition of first-round pick Oklahoma wide receiver CeeDee Lamb. Another great year from Moore and he’ll be one of the hottest coaching candidates out there.

No defense coordinator in the NFL looks the part more than Robert Saleh. You want someone intense on the sidelines? Saleh seems like he’s ready to check himself into the game and make a tackle. He has received a lot of praise for building San Francisco’s stout unit. The 49ers led the league in fewest passing yards allowed (169.2) and were fifth in sacks (48). They stifled Patrick Mahomes and the Chiefs for most of the Super Bowl before faltering in the fourth quarter.

NFL management usually hires offensive coordinators. So, when you’re a defensive coordinator you must truly stand out. Saleh, believed to be the NFL’s first Arab-American coordinator, interviewed for the Cleveland Browns job but lost out to Minnesota Vikings coordinator Kevin Stefanski. He also declined an interview at Michigan State where he served an assistant in 2002 and 2003. It will be shocking if Saleh isn’t an NFL head coach in 2021.

Tampa Bay is the only team with three African American coordinators: Leftwich, Todd Bowles (defense) and Keith Armstrong (special teams). Credit Bruce Arians for giving qualified coaches these opportunities. Under Leftwich, Tampa has had the best passing offense in the league for the past two seasons. He got the most out of guys like Ryan Fitzpatrick and Jameis Winston. Now he’s working with Tom Brady.

Brady’s presence alone elevates the Buccaneers to a legitimate Super Bowl contender. Unlike last year with New England, Brady has weapons to work with: wide receivers Mike Evans and Chris Godwin, and tight ends O.J. Howard and Rob Gronkowski. It’s Leftwich’s job to blend all this talent into a lethal offense. As long as Brady is healthy, Tampa should be one of the best teams in the league. Brady helped get Josh McDaniels and Bill O’Brien get head coaching jobs. We’ll be curious to see what happens with Leftwich.

Jason Garrett has been synonymous with the Dallas Cowboys for so long, it’s hard to believe he’s gone. He played there, serving as Troy Aikman’s backup in the 1990s and he spent almost of his coaching career with Dallas. But after a decade as the head coach (85-67, 2-3 playoff record.), Garrett was fired. It must have been tough on owner Jerry Jones who steadfastly defended Garrett at every turn.

It’s also probably a little annoying to Jones that Garrett went to work for a division rival. Garrett has a chance to redeem himself. He’ll look to improve a New York offense that averaged 21.3 points per game. Expect Garrett to lean heavily on a healthy tailback Saquon Barkley and try to limit the mistakes of second-year quarterback Daniel Jones. Garrett was once a hotshot, young coordinator. If he does a good enough job, maybe he’ll get a second shot as a head coach.

Fun fact: Joe Brady is considerably younger than three of the NFC South’s starting quarterbacks. Atlanta’s Matt Ryan is 35, New Orleans’ Drew Brees 41, and Tampa Bay’s Tom Brady 42. New Carolina coach Matt Rhule made one of the biggest splashes of the offseason by hiring Brady, who has risen through the football ranks faster than most. Four years ago, Brady was an anonymous graduate assistant at Penn State.

The former LSU passing game coordinator directed an overwhelming offensive attack for the national championship-winning Tigers. In one season, he helped turn quarterback Joe Burrow and receiver Justin Jefferson into first-round picks. Now, Brady is a part of a rebuild for team that outside of running back Christian McCaffrey doesn’t have a lot of skill-position talent. But for Brady, this is a no-lose scenario. Even if the Panthers falter, some college team (probably one in the SEC) will hire him immediately the moment he becomes available.