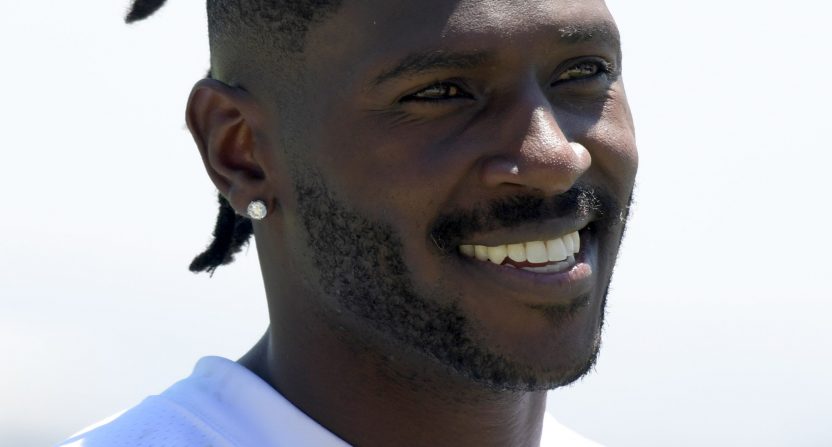 If you are a football fan, it is most likely that you are still reeling from all the drama surrounding wide receiver Antonio Brown. The move by Brown to the New England Patriots didn’t come as a surprise to many, but it is the drama surrounding the move that has elicited an uproar from diverse quarters. ‘

Now, Brown is a legend in his own right and one of the best wide receivers in NFL today. For the last six years, he has chalked a first-ballot Hall of Fame career. Consider this; an average of 114 catches for 1,524 yards and 11 touchdowns.

His NFL-best 15 TDs in 15 games in 2018 makes him a GOAT and it is no wonder he elicits so much interest. To get an idea of the receiver’s trail of firsts, you would have to go back to his 89-yard touchdown from reverse while playing the Tennessee Titans in 2010.

Remember when AB caught a 14-yard pass at the 2-minute mark and helped the Steelers to Super Bowl XLV in 2010? In 2011, he achieved another feat when he attained more than 1,000 yards receiving and returning in the same year. This was a first for any NFL player in history.

These achievements have given Brown a superstar status in NFL. In the NFL Network’s “Top 100 Players of 2019“ AB comes at #7 which underlines his skill.  Like all sporting celebrities, he has carved his name in football’s history in and out of the field.

Background to the Raiders Drama

Brown’s stay at the Oakland Raiders was short and tumultuous. It was a move destined to fail because he wasn’t interested in the Raiders and his heart was with the New England Patriots all along.

The Pittsburgh Steelers couldn’t sell one of the best receivers in NFL to their rivals and so started one of the most bizarre summers for an NFL player. It all started with a frostbitten foot for the popular wide receiver.

The drama then moved to the new helmet that NFL wanted Brown to wear. He threatened to quit football even though the newer safer helmet was for his own good. AB eventually agreed to wear the new helmet but tried getting out of it by painting his old beloved headgear.

To make matters worse, AB missed two crucial practices and got into a fistfight with the general manager of his team going to the extreme of hurling insults at the boss.

Things got even rougher when AB released a video with a recording of his is head coach, Jon Gruden. At this point, the Raiders had to react, and it was harsh. The team stripped Brown’s guaranteed money out of his contract. AB wasn’t going to take this anymore and demanded out. He finally had his wish and became a free agent.

In no time, Antonio Brown had finally joined the New England Patriots for a one-year deal. The lucrative package is worth up to $15m (£12m) and comes with a $9m (£7.2m) signing bonus.

This is good news not only impacts the Patriots but also the larger sporting world. Now that NJ online casinos can finally cash in on NFL action during the Super Bowl, bookmakers have closely watched the action surrounding AB action in NFL. Fans of Brown in New Jersey can finally place legal wagers ion their favorite player now that they have an idea where he’s at.

AB has the Last Laugh

So, there you have it; the entire Antonio Brown’s drama started because the Pittsburgh Steelers couldn’t stomach selling their prized player to a rival. But hasn’t he had the last laugh? From the frostbite, helmet saga to demanding a release on Instagram, was all the drama scripted to force the Raider’s hand?