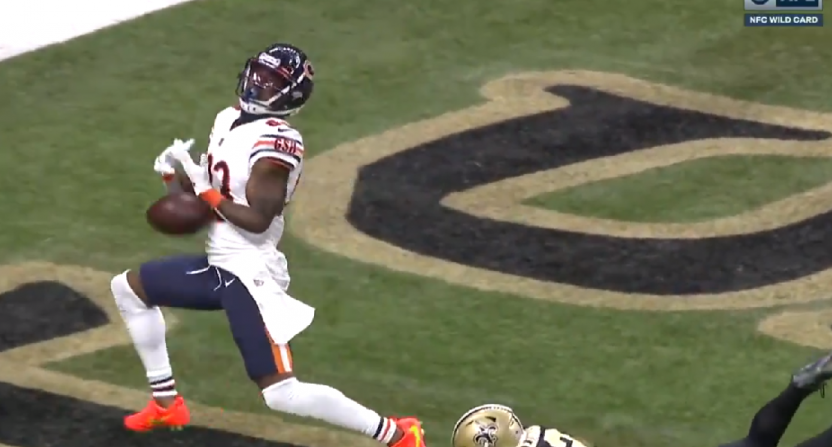 The Chicago Bears entered the playoffs at 8-8, only making it to the postseason thanks to the expanded playoffs allowing a seventh team in each conference.

Having gone from Mitch Trubisky to Nick Foles and back to Mitch Trubisky during the season, with a defense ravaged by injuries and, even when healthy, not up to the levels of their dominant 2018 season, any logical prediction of how today’s matchup in New Orleans would go featured the Saints winning easily.

That’s exactly what happened, with the Bears unable to do anything at all on offense, while the defense was worn down by Alvin Kamara’s excellence and Drew Brees’ veteran ability to diagnose blitzes and coverages more quickly than the Bears could compensate. All of that led to a 21-9 Saints win, and it honestly wasn’t that close.

For some of the first half, though, it looked like maybe Chicago wouldn’t play along to the logical narrative.

The Bears should have taken an early lead, and unlike most of their offensive woes, Trubisky was actually not to blame at all for their failure to do so.

First, there was this throw down the sideline to Javon Wims:

After the Bears were forced to challenge a poor incompletion ruling on that play, they came out with a trick play that led to Javon Wims being wide open in the end zone, and Mitch put the ball right into the sweet spot. Then:

It’s telling that play was pretty much the last Bears offensive highlight the NFL tweeted out. Allen Robinson had some great catches despite horrible throws as per usual. Other than that, it was pretty much just defensive play for Chicago that kept them within touch. Turning the Saints over with a big man INT off of a Taysom Hill miscue was probably the biggest moment of optimism:

Other than that, it was pretty much all Saints.

Brees with the touch pass to Murray for SIX.#SuperWildCard #ForNOLA

Kamara is back in the end zone!

In the end, after a garbage time last-second touchdown to Jimmy Graham that was very important to some boys in the desert, we were left with the Saints advancing to host a Divisional round game against Tom Brady and the Bucs. The Bears, meanwhile, head to a pivotal offseason, where they’ll have to decide on the futures of free agent Trubisky, embattled head coach Matt Nagy, and grossly incompetent general manager Ryan Pace.

Pace has been in Chicago for six seasons, and all the Bears have to show for it is an aging and expensive roster with no reliable quarterback play, no surplus draft capital, and most importantly, no playoff victories. If he’s back next year, it’s fair to ask what he’d have to do to be fired. There’s no such thing as a ten-year plan in the NFL, but here we are. These are the Bears: a mismanaged team that can’t find a quarterback better than Jay Cutler, built around a style of play that is at least a decade or two out of it.

But hey, at least Mitch has one thing to add to his resume as he hits free agency:

Congrats to Mitchell Trubisky on adding a new honor to his awards section: the very first Nickelodeon Valuable Player pic.twitter.com/wzLt1fcTCo

The Bears now have the same number of NVP trophies as they do Super Bowl wins in franchise history.