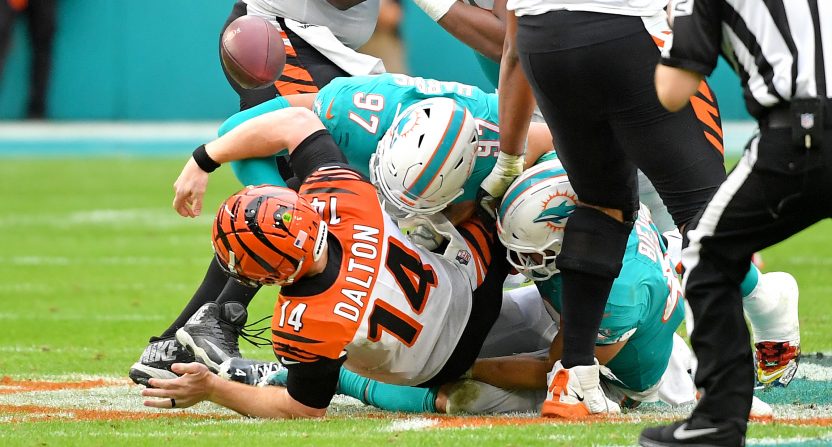 The Cincinnati Bengals almost found a way to mess up having the No. 1 pick in the 2020 NFL Draft. That’s how committed they are to the Bungles moniker.

Coming into Sunday with a 1-13 record, the Bengals simply needed to do what they’ve been doing all season long in order to secure the top pick in next year’s draft. They just had to keep losing. Even with the Miami Dolphins (3-11) lining up across from them, that seemed like an easy task. But as it turns out, never send the Bengals to do what they’re supposed to.

With a little under four minutes left in the third quarter, Cincy was well on their way to clinching the No. 1 pick, down 28-6. However, they failed to get the memo and started mounting a rather epic comeback. On 4th & 3 from the 24 yard-line, Andy Dalton stepped back and delivered a floater to Tyler Boyd who jumped into the endzone and gave life to a franchise whose fans did not want any.

The Dolphins seemingly put the game away early in the fourth quarter with a Myles Gaskin touchdown run to make it 35-12, but that’s when the Bengals really pounced. First, Dalton hit tight end C.J. UZomah for a touchdown to make it 35-19.

Then, Dalton found Tyler Boyd for another touchdown and a successful two-point conversion to make it 35-27. It should be noted that 27 points were most points Cincy has scored in a game the entire season. But they weren’t done.

With no time left on the clock, Dalton fired a rocket into the endzone and found Tyler Eifert for a 25-yard touchdown, making it 35-33 and requiring another two-point conversion to send the game into overtime.

It should be noted at this point that while there was NO QUIT in the Bengals, their fans really wished there was.

Regardless, Dalton worked a little more magic on the final play of regulation. Flushed out of the pocket, he scrambled for the endzone and scored the conversion, sending the game to overtime.

The Bengals just got

Imagine this happening in a meaningful game. Everything would explode.

And just like that, the Bengals were in overtime fighting for their pride and glory, all the while putting their potential rights to the No. 1 draft pick in jeopardy. Alas, it wasn’t to be as the Dolphins kicked a game-winning field goal with time expiring in the extra period. The Bengals lost…and yet they won. All in spite of themselves.

The #Bengals are on the clock!

Andy Dalton did everything he could to prove why the Bengals shouldn’t draft LSU’s Joe Burrows with that draft pick. If only he’d played like he was trying to prevent the Bengals from securing the top pick sooner, they might not have even been in this position, to begin with.