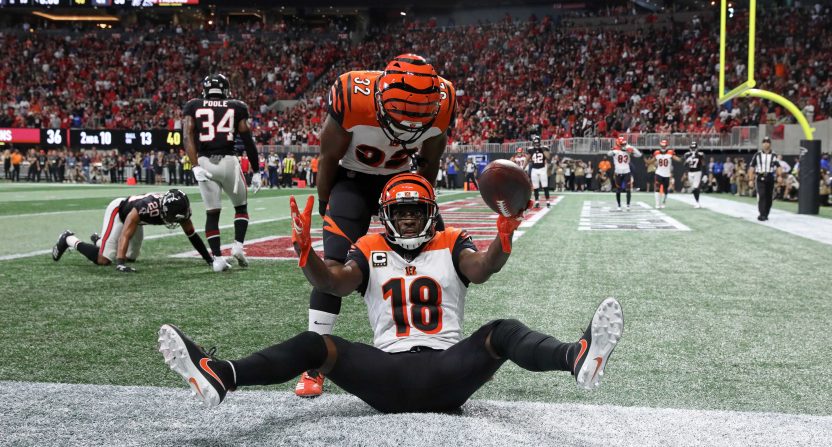 Andy Dalton and AJ Green would like to introduce you to the 2018 Bengals offense, which might be the league’s most underrated:

In a world of suddenly-potent NFL attacks, Cincinnati have kept pace. They’re 3-1, lighting up capable Baltimore and Atlanta defenses, and they torched Falcons cornerbacks all day in a chaotic 37-36 win, ending with the above last-second Dalton-to-Green touchdown.

Cincy have a fun, diverse offense with superstar talent (Green) and breakout candidates (Tyler Boyd). They’ve scored the fourth-most points per game despite a Week 2 injury to starting running back Joe Mixon. (He’ll be back soon.) They came out swinging in a Week 3 primetime game against the Ravens, conquering their long-held national TV demons with three first quarter Green TDs.

It will take more than early season success to vanquish the spirits of playoffs past. They’ve wasted plenty of talented rosters before, with disappointing records and postseason collapses. Whether it’s for real or not is still to be determined.

What’s true: Their offense is a microcosm of today’s NFL. They use running backs as central elements of the passing game, as decoys, possession receivers and open field playmakers. Green, the elite wideout with the height to grab any and every lofted ball Dalton heaves, is playing in the slot more than ever. Offensive coordinator Bill Lazor employs elaborate misdirection in the passing game.

Much of what the Bengals do is based around screen plays. Giovani Bernard, a capable pass-catcher filling in for Mixon, is a constant threat to slip out of the backfield.

Short dump passes to tight ends in unusual formations — often the increasingly-popular look with the tight end lining up almost behind the tackle — have been effective.

The threat of short passes creates mismatches elsewhere. Teams have to spy the running back and take zone defensive back out of the normal zone coverage, making it easier to generate numerical mismatches:

Notice how when Bernard motions wide to the top of the screen, Atlanta’s zone defense shifts so that someone is directly covering him. Eventually, the high safety moves toward that side of the field, leaving the corners covering Boyd and John Ross alone. Boyd and Ross run clever, but not uncommon, intersecting routes and Ross catches the 39-yard touchdown.

Cincinnati almost always are trying to take advantage of similar concepts. Tight end CJ Uzomah (the replacement for Tyler Eifert) will be left with only a linebacker to beat because safeties and nickel corners are needed elsewhere.

Against the Falcons, the Bengals rarely ran formations with four or five wideouts — only on that last drive, in which time was a pressing issue, did they consistently spread the field. When they did throw out more than three receivers, they sometimes would have one stand at the line of scrimmage as a decoy bubble screen.

Cincy want to give their players opportunities to gain yards after the catch, something they can rely on because Bernard and Mixon are among the better running back pass-catchers in the league. Uzomah has shoes to fill, given Eifert had had a solid start to the year.

Boyd had 11 catches — on 15 targets — in Atlanta. He has developed into a quality possession receiver, running soft crossing routes and giving Dalton a safety net. Green has seen some pressure taken off with Boyd developing the way he has. No longer does Green have to be the constant target.

Dalton, of course, is the engine of it all, and his playmaking ability continues to be under-appreciated. Less teams keep a QB spy in the box in case he scrambles due to the threat out of the backfield, and he’s occasionally been able to take advantage.

The Bengals’ games against Pittsburgh and Kansas City in Weeks 6 and 7, after a matchup with the Dolphins on Sunday, will be tests. They’ve been able to win shootouts thus far, and those project to feature plenty of scoring. Cincinnati have to keep adding wrinkles to sustain offensive success — maybe more deep balls to Ross, or wheel route variations to Mixon or Bernard.

They’ll be a team to watch. The AFC North could fall to them if Pittsburgh keep being absolutely absurd, and if Baltimore start struggling defensively as they did against Cincinnati. The Bengals would like you to believe this is actually the year.