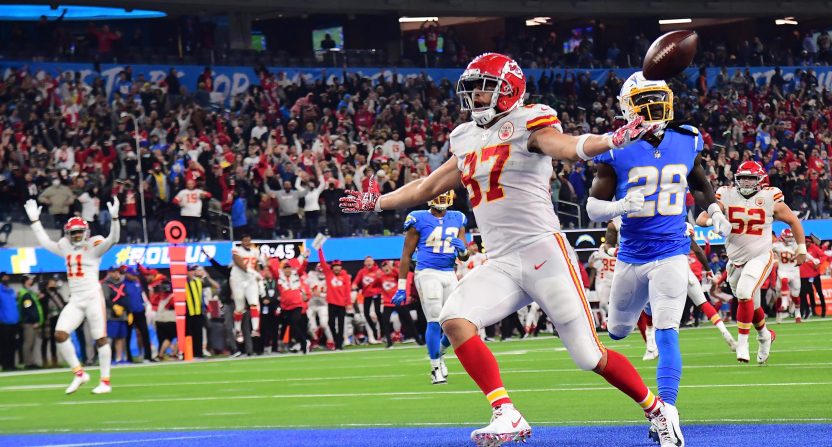 There were several great plays and a lot of bad moments this NFL season. Here’s a recap of the ones that stuck out to us:

How much fun is it going to be to see Patrick Mahomes and Justin Herbert duel it out in the AFC West twice a year every season? After the third quarter, the teams combined for 35 points. Mahomes engineered three (3!) 75-yard touchdown drives. The final play was Travis Kelce weaving through traffic to end the game.

San Francisco trailed 17-0 in the second quarter. According to Next Gen Stats, the Niners had a 0.4 percent win probability after punting down 24-17 with 1:50 left in regulation. They got a touchdown pass from Jimmy Garoppolo to Jauan Jennings to force overtime, a short field goal from Robbie Gould, and a game-ending interception by rookie Ambry Thomas to clinch a playoff berth. You could have made a lot of money with kucasino.

Mike Tomlin dozed off before finding out the Steelers made the playoffs. The Chargers, once down 29-14, rallied to send the game into overtime on the final play of regulation when Justin Herbert connected with Mike Williams on a 12-yard touchdown as time expired. After the teams traded field goals, it looked like the game would end in a tie, putting L.A. in the playoffs and knocking Pittsburgh out. But after a strange timeout from Chargers coach Brandon Staley with 38 seconds left, the Raiders ran another play for a 10-yard run and Daniel Carson booted the game-winning 47-yard kick.

What a win!
What a day!@chargers 32 vs @Raiders 35#RaiderNation you’re headed to the playoffs

So are you @Steelers fans!

The Bills were 14.5-point favorites over a Jacksonville team that was 1-6 and was coming off a 31-7 loss at Seattle. Josh Allen was terrible — two interceptions and a fumble), and Buffalo had 12 penalties, including five personal fouls. Allen summed it up by saying:  “I played like sh*t.”

Jacksonville just put up a huge upset over the Bills 🤑pic.twitter.com/ixsR5r1ccw

Baltimore played 12 games decided by one score, four of those went into overtime. For a while, the Ravens were able to overcome their depleted roster. But injuries — no Lamar Jackson for the final four weeks — finally caught up with them as they finished on a six-game slide. The season ended, of course, in overtime with a 16-13 loss to the Steelers.

There was some criticism over the Bengals drafting a wide receiver over an offensive lineman. You don’t hear that anymore. Chase is the most valuable rookie receiver since Randy Moss. His domination against Kansas City was staggering: 11 catches for 266 yards and three touchdowns in a 34-31 victory.

Who had the privilege of playing Ja'Marr Chase during championship week?

Sometimes football is not that complicated. If you’ve got a strong-armed quarterback, just let him fire the ball downfield. Herbert unloaded this jaw-dropping heave under pressure to Jalen Guyton for a 59-yard score.

Garrett displayed all the traits that make him great. With under a minute before the half, he sacked Ravens backup quarterback Tyler Huntley to force a fumble, recover it, and run it back 15 yards for his first career touchdown.

With Miami up 14-0, Brissett threw a quick pass to rookie wide receiver Jaylen Waddle. The problem was that Waddle was still standing in the end zone. He was immediately tackled for a safety by cornerback Casey Hayward. The play was so awful that, according to Pro Football Reference, it was the first time that a completed pass resulted in a safety with no penalties or fumbles.

You can’t get consensus on almost anything in this country. But everyone piled on Giants coach Joe Judge for calling a quarterback sneak on 3rd-and-9 from his own five-yard line. Judge deserved to be fired for this play alone.

Seems like that Giants fan is shouting "You suck so bad! So bad" And after that QB sneak…fair. pic.twitter.com/MIl3I1jTP9

For the first time in the Russell Wilson-Pete Carroll era, the Seahawks were bad. But give it up to the coaching staff and players for this wonderfully executed fake punt that resulted in a 73-yard touchdown run by Travis Homer.

Cooper, the kickoff returner, let the ball bounce inside the five-yard line thinking it was going to go into the end zone for a touchback. Nope. The ball stuck at the two-yard line, and Cooper had to hurry back to retrieve it before being tackled at the five. Two plays later, Devontae Booker was stopped in the end zone for a safety (video can be seen here).

This “double punt” was so bizarre everyone thought it was a penalty. But according to the NFL, it’s legal. Dickson’s initial attempt was blocked, but he alertly scooped it up, ran, and then booted it again. The play drew a flag that was later picked up. Heck of an effort.

By even Brady’s lofty standards, this was impressive. He eviscerated the Dolphins by going 30-for-41 for 411 yards, five touchdowns, and no interceptions in a 45-17 victory. It was his best game of the season, and one of the best of his career (video can be seen here).

This is what I call a holy s&*% bad read and throw from #Giants QB Mike Glennon 🤣 pic.twitter.com/0oB9JnAso0

Allen is an insane athlete. Not only did he nimbly escape the pocket to avoid a sack, but with a defender hanging all over him, he still had the arm strength to fire a pass into the end zone for Stefon Diggs.

A thing of beauty. 😍

Philadelphia fans love to complain about their wide receivers. So, they were understandably giddy about this amazing toe-drag grab. Smith somehow got both feet inbounds on this third-and-goal score.

Damien Harris, once Derrick Henry’s backup at Alabama, looked like King Henry. He rumbled for a 26-yard score by running over the Jets. There were at least five missed tackles, and Harris carried four defenders into the end zone.

The play obviously wasn’t designed for the 6-foot-6, 327-pound right guard, but he made the most of the opportunity. Hunt caught a short pass, tumbled into the end zone and stretched so that the football crossed the goal. A wonderful effort all for naught. He was an ineligible receiver.

THIS NEEDS TO COUNT 🗣🗣
pic.twitter.com/FotC7Hi8xZ

The Cardinals were lined up to punt on 4th-and-2, but up-man Chris Banjo took the snap, ran right, and threw a 23-yard-completion to Ward. Ward caught the ball with one-hand as he fell while pinning it against the helmet of the Cowboys’ Nahshon Wright.

JUSTIN TUCKER ARE YOU KIDDING ME.

The over/under in the Chiefs vs. Chargers game was 54.5.

This missed extra point from Tristan Vizcaino kept the total at 54 😳 https://t.co/4djbzWuknD

There’s NEVER a good time to attempt this pass. However, it’s especially awful in the final two minutes of a tie game. Under pressure, Wentz threw the ball in the worst possible place. Rookie cornerback Elijah Molden might not have an easier pick-six for the rest of his career.

Check out his concentration. With the score tied at 17 in the fourth quarter and the Niners driving, Ramsey deflected a pass intended for tight end George Kittle. He kept following the ball, tipping it multiple times before securing it for the pick in the end zone.

Not much went right for the Browns. But they’ll always have this dazzling finish to the first half against Arizona. Credit Baker Mayfield for keeping the play alive for this 57-yard touchdown to Donovan Peoples-Jones.

When the 6-foot-4, 310-pound defensive end lined up at fullback, you knew something special was going to happen. He hauled in a one-yard score against the New York Jets. Then he did “the worm.”

The whole world needs to see Christian Wilkins hit the worm after catching a TD. What a gem. pic.twitter.com/nKAfhIbZ7F

If you’re going to rejoice over a potential game-winning field goal, make sure it goes through the uprights. McPherson thought he had made a 49-yard kick to beat the Green Bay Packers in overtime. Oops. The Bengals eventually lost 25-22.

What Chubb did here to Steelers safety Miles Killebrew should be illegal (Najee Harris also had an incredible stiff-arm in the same game).

planted him so deep into the earth he grew rootspic.twitter.com/VRzflw9xFE

Diggs paid tribute to the late Betty White with shoes that included the words “Thank You for Being a Friend,” the title of the television theme song for The Golden Girls.

Thank you for being a friend.@StefonDiggs is honoring late, great Betty White today. 🙏 #NYJvsBUF pic.twitter.com/wTd7e80mdS

Anna Love never publicly complained but c’mon. She had to watch her son’s first pro career start from the nosebleed section. You could blame Kansas City, but apparently the Packers also are at fault.

“A man has two things: his words and his nuts. And you don’t want to lose either.”

Robert Quinn on why he’s open with the media 💀