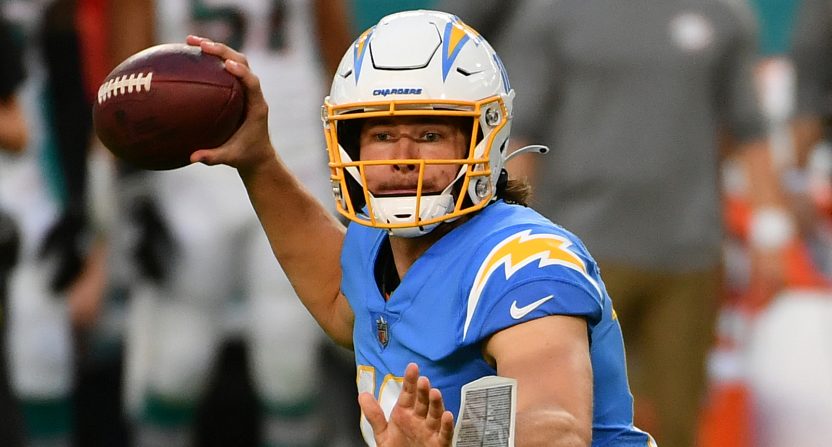 As Thanksgiving arrives, let’s take a moment to reflect on some of the most surprising developments from the first 11 weeks of a weird 2020 NFL season.

The quicker-than-expected rise of the Miami Dolphins: Just a year ago, it was a full-blown tank-job. Now, thanks to one of the NFL’s most stout defenses, Miami is in playoff contention. Brian Flores deserves Coach of the Year love, because Miami isn’t that stacked on paper.

The rise of Derek Carr: It really looked like the Las Vegas Raiders were itching to replace the veteran quarterback with Marcus Mariota, but Carr has experienced his best season yet. He’s even made progress with his oft-criticized deep-passing skills. He might never be a Hall of Famer, but at 29 he’s certainly a franchise quarterback.

The collapse of Carson Wentz: Meanwhile, Wentz has completely lost it for the Philadelphia Eagles. Despite a $32 million average annual salary, he leads the NFL in interceptions, fumbles, and sacks allowed. What the hell happened, and can he recover from this?

The 4-6 San Francisco 49ers and 3-7 Dallas Cowboys: Both preseason Super Bowl contenders have been ravaged by injuries to such an extent that they’re not remotely competitive.

Lamar Jackson’s regression: I think a lot of us figured the 2019 MVP would come back to earth a little bit, but the numbers are jarring. His touchdown rate has been chopped nearly in half, he’s already thrown as many picks as he did last year, and his passer rating is 20 points lower than it was in his memorable sophomore season. Has the league already figured Jackson out?

Ezekiel Elliott’s disappearance: The two-time NFL rushing leader has one 20-yard run all season… and that resulted in a fumble.

The quick rise of rookie receivers: You might have figured it would take some time for all of these guys after a scaled-back offseason and a canceled preseason, but nope. Justin Jefferson leads the NFL with 14.4 yards per target, Chase Claypool is one of a handful of players with 10-plus touchdowns, and CeeDee Lamb, Tee Higgins, and Jerry Jeudy are all on pace to push 1,000 yards.

Justin Herbert: Same mentality applied to the relatively raw Los Angeles Chargers first-round pick at quarterback, but Herbert’s deep ball is a thing of beauty and he’s a top-10 passer in most categories entering the home stretch. He has an edge on all of those receivers in the Offensive Rookie of the Year race.

James Robinson: And we have to shout out the undrafted rookie back from Illinois State, who ranks behind only Dalvin Cook, Alvin Kamara, and Derrick Henry in scrimmage yards. He’s outplayed each of the 19 backs selected in the 2020 draft, including first-rounder Clyde Edwards-Helaire.

The demise of A.J. Green: He’s healthy now and he had Joe Burrow in Cincinnati’s first 10 games, but Green is averaging 4.6 yards per target, which is the worst mark among qualified receivers by a margin of almost a full yard. He’s toast.

The lack of challengers for the Chiefs: The Ravens have faded, nobody seems to trust the 10-0 Pittsburgh Steelers as they continue to cut it close, the Buffalo Bills, Tennessee Titans, and Indianapolis Colts lack consistency, and nobody in the NFC has gotten it together. Although Pittsburgh still has a better record than Kansas City, nobody has leapfrogged the Chiefs to become the Super Bowl favorite.