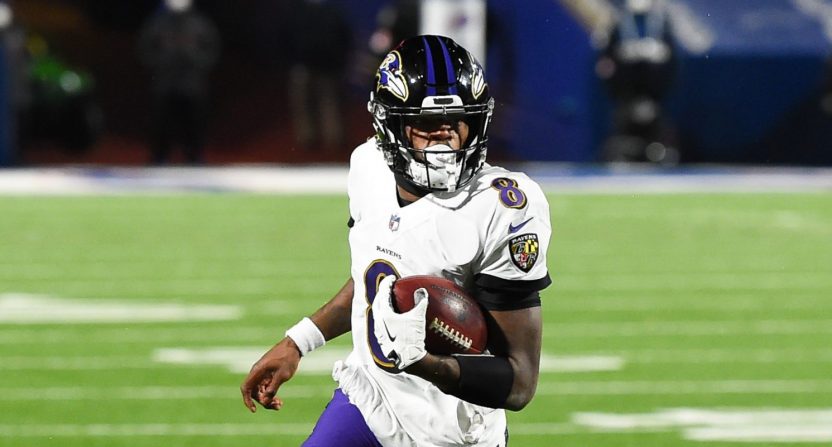 Now that we’re entering the heart of the 2021 NFL offseason, the three most successful quarterbacks selected in the first round of the 2018 draft are garnering buzz about potential long-term contract extensions.

Josh Allen of the Buffalo Bills, Lamar Jackson of the Baltimore Ravens, and Baker Mayfield of the Cleveland Browns are all now eligible for extensions or entirely new deals, so you can probably expect an offseason chock-full of speculation regarding the contract status of all three players.

That was the case when Patrick Mahomes of the Kansas City Chiefs and Deshaun Watson of the Houston Texans finished up their third seasons in 2020, and those two are now the highest-paid players in the league. It was also the case when Jared Goff and Carson Wentz became extension-eligible in 2019, and they too cashed in with their respective entry-level teams, the Los Angeles Rams and Philadelphia Eagles.

And that’s where the cautionary tale kicks in.

While it’s probably fair to conclude that the Chiefs don’t have any buyer’s remorse with Mahomes, he’s also likely an exceptional case. After all, he’s off to arguably the best start to a career in league history. The Watson situation is complicated by his recent trade request, but the jury remains out on his value because he’s coming off another strong season.

Goff and Wentz? They’ve already been traded away, but not before costing the Rams and Eagles $61.7 million and $60.9 million, respectively.

Clearly, the Rams — who had just made a Super Bowl with Goff — and the Eagles — who at the time were a year removed from a Super Bowl season in which Wentz was an MVP candidate — jumped the gun. Both undoubtedly wish they would have waited. If they had, Wentz and Goff would have remained under contract with fifth-year options through 2020, and both teams could have moved on at zero cost this offseason.

Instead, they paid early premiums and are now on the hook for dead-cap charges in excess of $22 million for 2021.

There was simply no reason to rush. The reality is a team that drafts a quarterback in the first round realistically can control that player’s movement for at least seven seasons: a four-year rookie deal, a fifth-year option, and between one and three franchise tags. The last tag would become unbelievably expensive and forcing a star quarterback to go year-to-year for that long could do a lot of damage to the relationship between team and player, but that still doesn’t mean there’s any reason to offer up an extension at the three-season mark.

The thinking might be that the salary cap will continue to rise (it has, with the pandemic causing only a one-year blip in 2021) and so it’s smart to make deals as soon as possible so that they’ll become discounts as the market grows with the kitty. But it’s not as though quarterbacks and agents don’t consider that reality when negotiating anyway.

You’re still better off waiting to ensure that your quarterback is the real deal, because there’s a good chance he won’t be. Just look at Wentz and Goff, or Mitchell Trubisky, or Jameis Winston and Marcus Mariota, or Blake Bortles, or EJ Manuel, or Robert Griffin III, or — even more recently — Sam Darnold, and Josh Rosen, and Dwayne Haskins.

Between 2006 and 2019, 40 quarterbacks were drafted in Round 1. Even if I'm being generous, no more than 25% of them have become stars. The majority have become busts. Several TBD/tough calls. pic.twitter.com/aHDvctNlo8

There’s really no guarantee Allen and Jackson will remain in the “star” category above, and many would argue that it’s too early to move Allen there based on just one strong season (at least Jackson’s had several and is an MVP winner). Meanwhile, Mayfield could just as easily move to the right as he could to the left.

Can their teams really afford to break the bank this early under those circumstances, especially considering how difficult it becomes to win when you have a highly-paid quarterback hogging a substantial amount of cap space? A team with a quarterback earning one of the three highest salary-cap charges at that position hasn’t won the Super Bowl since the San Francisco 49ers did so with Steve Young in 1994.

So while the Bills, Ravens and Browns are right to be excited about the potential that they possess in the QB1 spot, there’s no reason to hand those guys lucrative new deals right now.