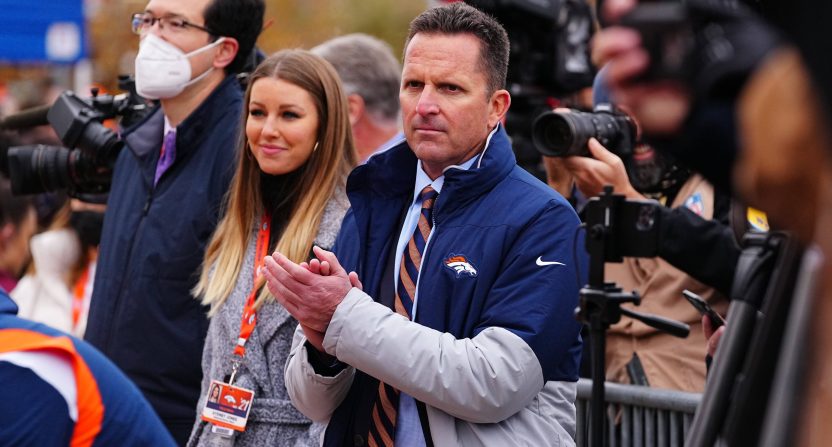 The Denver Broncos have a muddled ownership situation, a muddled quarterback situation, and a muddled coach situation. What is clear is that they have set themselves up for what promises to be an extremely interesting off-season.

Focus on the now if you want. Yes, technically, the Broncos (5-5) are still alive. It’s the AFC. Everyone except for the New York Jets, Houston Texans, and Jacksonville Jaguars is still alive. But realistically, even if Denver squeezes into the playoffs (the Broncos are currently the No.12 seed out of the seven available spots), this team isn’t a serious contender.

Our top TDs so far this season: pic.twitter.com/RoNeUqx1kC

What’s the plan going forward? Well, the expectation is that the franchise will be sold next year with an asking price of about $4 billion. The last time an NFL team was on the market, hedge fund billionaire David Tepper paid an NFL record $2.275 billion for the Carolina Panthers in 2018. Denver will fetch more, because it’s a high-profile organization with a rich history — three Super Bowl titles — and a rabid fanbase. They’re the top sports attraction in Colorado. No one else is close. The NFL probably has a good idea on who the next owner will be (NBC Sports’ Peter King says it probably won’t be Amazon kingpin Jeff Bezos).

The new owner will want to see an immediate return on the investment. That means changes. Denver head coach Vic Fangio entered this season on the hot seat, and making the playoffs might not be enough to save his job. If you’re the new owner, why not start fresh? Of course, if the sale drags into the spring/summer that could work in Fangio’s favor.

Right now, first-year general manager George Paton is running the organization as if he’s planning to be there for a while. And if Fangio can’t win with this roster, Paton will find someone who can. And a potential new coach will likely have a new quarterback.

One of the most interesting recent roster moves was Denver announcing contract extensions to wide receivers Courtland Sutton and Tim Patrick. Viewed in a vacuum, that’s just smart business. However, that also might be sending a message that Denver intends to be a major player for a franchise quarterback.

In 2022, the Broncos will have the most projected salary cap space, with $79 million to spend. They also will have 11 picks in next year’s draft.

That’s enough ammunition to get a difference-maker at quarterback. Journeyman Teddy Bridgewater is enjoying a career-best year, but he’s a one-year rental.

The AFC West features Patrick Mahomes and Justin Herbert. Denver needs a quarterback who can compete with those guys. The good news is there could be three substantial upgrades available: Aaron Rodgers, Russell Wilson, and Deshaun Watson.

That’s an unprecedented amount of talent that could be in play. It’s rare that players like that hit the market. But in recent years, we’ve seen Tom Brady leave New England as a free agent, then sign with the Tampa Bay Buccaneers and win a Super Bowl. Matthew Stafford was traded to the Los Angeles Rams and they’re a championship contender. So, it’s possible to acquire a star quarterback if you have the cap room and assets.

Denver, like Tampa in 2020 and like L.A. this year, is close. The Broncos have skill-position players like wide receivers Sutton, Patrick, and Jerry Jeudy, and tight end Noah Fant. They have a talented rookie running back in Javonte Williams. They have a defense with a loaded secondary, featuring rookie cornerback Patrick Surtain II and safety Justin Simmons.

In short, the Broncos should be a desirable location for any quarterback seeking a new home. Rodgers to the Broncos has been rumored since the summer and makes the most sense. The Packers could accommodate Rodgers while also sending him out of the conference. Rodgers, who turns 38 next week, would join a team with a supporting cast good enough to help him age gracefully.

Radio host Dan Patrick has said that the Von Miller trade was made with Rodgers in mind.

“The Broncos are gearing up to get Aaron Rodgers. That’s what they’re doing,” Patrick said. “This may not be the only player they get rid of, but they know they have a young nucleus there. Von Miller was expendable. They’re going to gear up, load up if Aaron Rodgers somehow doesn’t want to stay in Green Bay.”

The biggest concern might be competition from a team like the Pittsburgh Steelers. If Ben Roethlisberger retires, that would free up additional cap space to pursue Rodgers.

If Denver can’t get him, Russell Wilson might be a “fallback” option. The marriage between Wilson and the Seattle Seahawks appears to be fraying. Wilson, like Rodgers, could request a trade. He’s younger and durable.

As for Watson, that might be a bigger longshot. Watson is still being investigated for inappropriate conduct and sexual assault, and is facing more than 20 civil lawsuits.  Until there’s a resolution, it seems unlikely that a team would be willing to acquire him.

Whatever the Broncos decide, they have made themselves an attractive destination- and the team to watch in 2022.