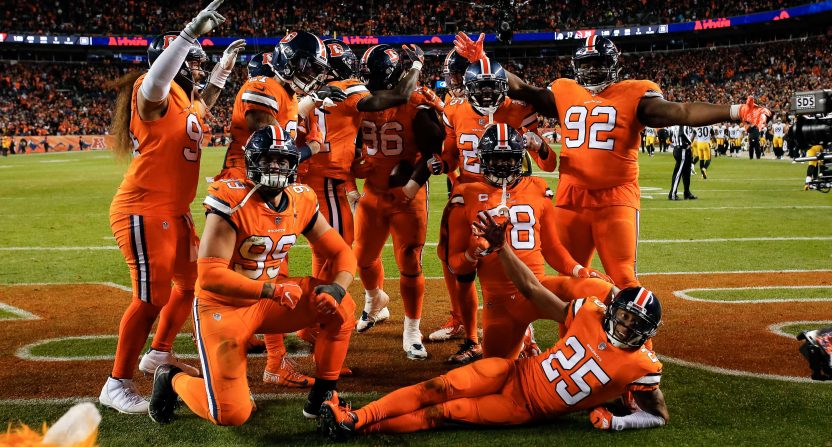 Entering Week 11, the Denver Broncos’ season looked over. The Broncos were 3-6, with their next two games against very good teams in the Los Angeles Chargers and the Pittsburgh Steelers.

As 7-point underdogs in Week 11, Denver stunned the Chargers in Los Angeles 23-22. The Chargers entered the game with a six-game winning streak.

And in Week 12 action on Sunday, the Broncos again pulled off an upset — as 3-point underdogs — with a 24-17 win over the Steelers. The Steelers entered the game with a six-game winning streak.

It appeared the Steelers were about to tie the game with just over a minute remaining, but Ben Roethlisberger was intercepted by Denver nose tackle Shelby Harris in the end zone on a pass from the two-yard line.

All of a sudden, the Broncos are 5-6, and every remaining game on their schedule is very winnable (or at least no more difficult than the two games than they just won): at the 5-6 Cincinnati Bengals, at the 2-9 San Francisco 49ers, vs the 4-6-1 Cleveland Browns, at the 2-9 Oakland Raiders, and vs the 8-3 Los Angeles Chargers.

The Broncos will be favored in the 49ers, Browns, and Raiders games. The Bengals just lost 35-20 at home to the Browns on Sunday. The Broncos of course beat the Chargers in the previous matchup, and if Denver is still in playoff contention entering Week 17, you know Mile High will be rockin’.

You can see the path to the Broncos being able to reach nine+ wins, and it’s possible it only takes nine wins to get the AFC’s No. 2 Wild Card. The Baltimore Ravens currently would be the No. 2 Wild Card at 6-5. And they would have the tiebreaker over the Broncos due to a head-to-head victory earlier in the season, so it’s essentially a two-game deficit for the Broncos. And the Indianapolis Colts are also 6-5, and the Tennessee Titans are 5-5.

It’s a very crowded picture for the No. 2 Wild Card, and it would take the Broncos going on one hell of a run to finish the season. Five Thirty Eight only gives the Broncos a 12% chance to reach the playoffs, for example.

But the chances certainly appear better for Denver than they did a couple weeks ago. Their Von Miller-led defense is still a very good unit, and they’ve established an identity on offense with undrafted free agent rookie Phillip Lindsay emerging as one of the most productive running backs in the league.

The Broncos are getting hot at the right time, and if nothing else have made their seemingly lost season one worth following down the stretch.