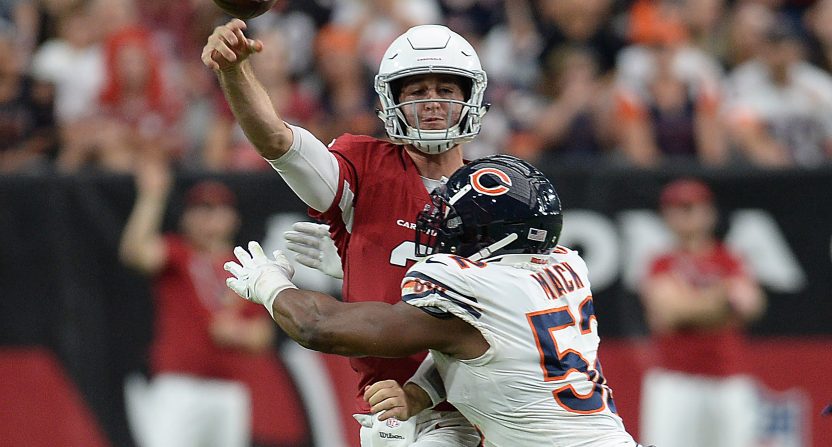 The Arizona Cardinals had a surprising 14-0 lead over the Chicago Bears on Sunday, only to lose the game 16-14.

The Bears’ defense — and particularly the Khalil Mack-led pass rush — made life tough on Sam Bradford.

So much so, that Bradford was benched in-game. Now, that’s not exactly surprising; he’s a 30-year-old quarterback past his prime on a bad football team, and they just used a first-round pick on UCLA quarterback Josh Rosen this year. The Comeback’s Adam Patrick wrote this week how the Cardinals are accomplishing nothing by sitting Rosen. They’re a bad football team either way, but at least they can accelerate Rosen’s development by playing him.

But the timing of the decision to bench Bradford for Rosen was very odd- it was literally with the game on the line. The Cardinals trailed 16-14 when Rosen came into the game with 4:31 remaining, for his NFL debut, against Khalil Mack and one of the best defenses in the NFL. No pressure, kid. Rosen completed 4-of-7 passes for 36 yards with an interception on fourth down.

When you pick off a pass with 1:10 left in the game and holding a 2-point lead, maybe you need a nickname.#CHIvsAZ | #DaBears pic.twitter.com/fl4ahVxBmd

Bradford looked awful, and Rosen showed some of his very promising skills to finish the game. But why not make the switch earlier in the game, or to just begin the game, of course? And why throw a rookie quarterback into this situation to make his NFL debut? Sure, if he leads the team to a game-winning drive, it’s a huge confidence boost for Rosen and for the team in his abilities. But vs the Bears’ defense, that was an unlikely result.

So, that was one perplexing move from Arizona head coach, at least with the timing. And then there was the removal of star running back David Johnson in the final minutes, in favor of Chase Edmonds. The main play that stands out is actually the play before Rosen’s interception. On 3rd-and-2 at Chicago’s 42-yard line, Rosen handed the ball to Edmonds, and the rookie running back was tackled for a three-yard loss. If the Cardinals were able to get a first down, they’d be in field goal-ish range. Instead, they were forced to go for it on 4th-and-5, and Rosen threw the interception.

I'd love to know the reasoning behind that third-down play call. David Johnson isn't on the field, Chase Edmonds gets the carry and loses 3 yards.

Edmunds in the backfield on 3rd & 2

Where is David Johnson?

I cannot believe that I just saw the #Cardinals run Chase Edmunds to the perimeter on 3rd & short on what amounted to the last play of this game.

Josh Rosen is a really smart dude. Certainly smarter than me. I'd pay to hear what he thought of that play call.

How is David Johnson not on the field for that play?

Wilks blamed the blocking. You can tell by the ratio on this tweet how Cardinals fans felt about that explanation:

Wilks said, RE Edmonds on third down play, have “total confidence” in Chase. Said it was blocking that cost the play, not who was running the ball.

One thing we can assume is that Rosen will be the Cardinals’ quarterback going forward, at least. The Cardinals are now 0-3, with a very bad roster, and it appears they finally realized (by the time the game was almost over!) that playing Bradford is a waste of time.