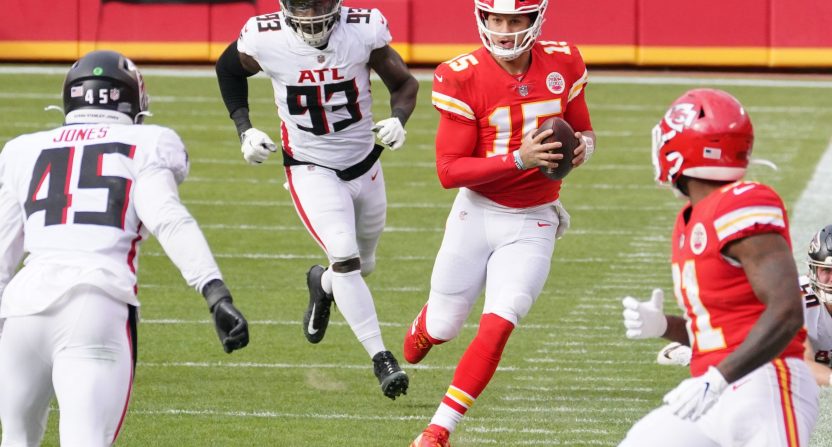 To the untrained eye, the 13-1 Kansas City Chiefs struggled to defeat the 4-10 Atlanta Falcons. Yes, the Chiefs took the lead on a late TD and relied on a missed Younghoe Koo field goal to seal the win but their 17-14 win was less about whether or not it was close and more about a dominant team who was just playing with a team they knew they were going to beat from the start.

Sure, there were some scares. The Falcons kept the Chiefs scoreless until late in the first half and picked off a fourth down trick play pass that was headed to Patrick Mahomes.

The Falcons also took the lead twice and were either tied or had the lead for the first 58 minutes of play. It wasn’t until Demarcus Robinson scored the winning touchdown at the two minute warning that they held the lead. And then it took a slice by Koo on the field goal to really seal the win.

The @Chiefs re-take the lead with 1:55 remaining! #ChiefsKingdom

All that being said, let’s be serious. Look at who the Falcons are and look at who the Chiefs are and tell me this game wouldn’t end with a Chiefs victory?

The Falcons have been such renowned chokers in 2020 that I don’t even need to mention the low hanging fruit everyone else likes to mention when they talk about the Falcons.

Week 2, the Falcons were leading the Cowboys by 20 at one point and had a 15 point lead with five minutes left. After two touchdowns and an onside kick where the Falcons just stood around staring at the ball waiting for the Cowboys to fall on it when it hit 10 yards, the Cowboys hit a last second field goal and won.

The very next week, the Falcons had a 16 point lead against the Bears with a little over six minutes to play. After three three-and-outs and an interception, Nick Foles made the Falcons pay by firing three touchdowns for the 30-26 win.

For the next couple months, the Falcons lost in more traditional ways (and also won four games) but their choking ways came back last week against the Buccaneers. This time, the Falcons blew a 17-0 lead at halftime by the end of the third quarter and the Bucs won 31-27.

All that being said, if the Falcons have a history of blowing double digit leads in a short period of time, why would the Chiefs be concerned about losing when they were at most, down by a touchdown? Winning close games is something the Chiefs have been doing all season.

The Chiefs have had a few blowout victories but you’d be surprised how many games have been decided by less than a TD for a 14-1 team. They haven’t had a double digit victory since their 35-9 victory against the Jets in Week 8. The Chiefs are on a seven game streak where they have won by less than seven points.

There are two ways to look at this. One way is the Chiefs are mentally tough enough that they are able to pinpoint exactly how much effort they need to put into a performance and still get the win. They don’t need to exert more energy than they need to and the Chiefs can save that energy for the playoffs when it really counts.

Another way to look at it is the Chiefs are playing a dangerous game every week. Teams like the Broncos and the Falcons, the Chiefs should be able to easily beat but they left it late. For some, it doesn’t matter if they win by 3 or 30 points, a win’s a win but they can’t expect to toy around with someone in the playoffs and expect to automatically comeback.

For the Chiefs and Falcons, the Chiefs played rope-a-dope against the Falcons and they did it because they knew they could. They won, they have home field advantage and are the favorites to win the Super Bowl. They went against a team who wasn’t as mentally tough as them and made them pay. It’s just that, going into Week 17 with home field advantage and a first round bye already clinched, can the Chiefs maintain that mental toughness when they get back to playing a meaningful game in three weeks?