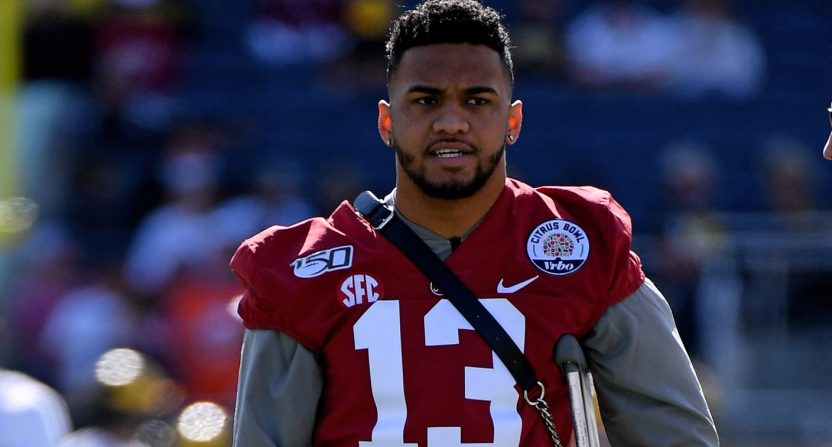 Real(ish) sports! We won’t get to watch professional athletes do things Thursday night, but we’ll at least be able to tune in to a sporting event with an outcome that can’t be Googled in advance.

One day ahead of the 2020 NFL Draft, here’s what we think the Round 1 outcome should look like.

1. Cincinnati Bengals: QB Joe Burrow, LSU — Let’s not get pretty here, because we know the Bengals won’t. This is the right move.

2. Washington Redskins: Edge Chase Young, Ohio State — A team that already has plenty of talent up front on defense should entertain offers. I just don’t think anybody will be willing to move up.

3. Miami Dolphins (via Detroit Lions): QB Tua Tagovailoa, Alabama — I think the Justin Herbert chatter is smoke, I think Tua is the better prospect, and I think the Lions figure they can get their man in the No. 5 spot. So I think they’ll offer Miami a discounted price (a Day 2 pick) to move up two spots. I think, I think, I think.

4. New York Giants: LB Isaiah Simmons, Clemson — You get the second-best player in the draft in the No. 4 spot, and you turn your defense around immediately.

5. Detroit Lions (via Miami): CB Jeff Okudah, Ohio State — They pocket an extra Day 2 pick, and wind up with one of the most complete and talented defensive back prospects in years.

TRADE: Cardinals trade the No. 8 overall pick to Atlanta for the No. 16 overall pick and a second-round pick.

TRADE: Browns trade WR Odell Beckham Jr. to Washington for OT Trent Williams, then trade the No. 10 overall pick to Jacksonville for edge Yannick Ngakoue and the No. 20 overall pick.

13. San Francisco 49ers (via Indianapolis Colts): WR Henry Ruggs III, Alabama — With Jeudy and Lamb off the board, this is basically by default.

14. Tampa Bay Buccaneers: OT Jedrick Wills — Couldn’t imagine a better scenario for the Bucs, who would plug in Willis at right tackle immediately.

15. Minnesota Vikings (via Denver Broncos): OT Mekhi Becton, Louisville — With two first-rounders, the tackle-starved Vikes figure they can afford a second-rounder in order to get great value for the intriguing Becton in this spot.

TRADE: Broncos trade the No. 15 overall pick to Minnesota for the No. 22 overall pick and a second-round pick.

16. Arizona Cardinals (via Atlanta): Edge K’Lavon Chaisson, LSU — Arizona pockets a second-round pick and still lands one of the top three pass-rushers in this draft class.

17.  Dallas Cowboys: DT Javon Kinlaw, South Carolina — A cornerback would be tempting here, but Dallas remains in better shape there than up front. They need more support for Tank Lawrence and this is great value.

19. Las Vegas Raiders (via Chicago Bears): CB A.J. Terrell, Clemson — The Raiders gave up a tied-for-league-worst 8.3 yards per pass attempt and an AFC-worst 103.8 passer rating in 2019, and they haven’t done enough to address that secondary.

22. Denver Broncos (via Minnesota): WR Tee Higgins, Clemson — Higgins has a better chance of hitting than Denzel Mims, but either would work for a team that needs another target for young quarterback Drew Lock.

23. New England Patriots: LB Patrick Queen, LSU — The Pats will likely try like hell to move down here, but I’m not sure there’s a lot of interest in this pick. They settle for the best player available.

24. New Orleans Saints: LB Kenneth Murray, Oklahoma — Queen and Murray are neck-and-neck. The Saints should take whichever one is available.

25. Minnesota Vikings: CB Jeff Gladney, TCU — He’s well-established, physical and versatile, and Minnesota is desperate after losing its top three corners from 2019. Minnesota will now have to package its two third-round picks to grab a receiver in Round 2.

26. Miami Dolphins (via Houston Texans): S Xavier McKinney, Alabama — Another best-player-available choice, and it fills another need for a Dolphins team rebuilding across the board.

27. Detroit Lions (via Seattle Seahawks): Edge A.J. Epenesa, Iowa — The Seahawks love to trade back, and the Lions have ammunition to move up and secure support for Trey Flowers here.

TRADE: Seahawks trade the No. 26 overall pick to Detroit for a second-round pick and a third-round pick.

28. Baltimore Ravens: LB Zack Baun, Wisconsin — The pro-ready Baun could be utilized in a wide variety of ways by a Ravens team with very few holes.

31. Indianapolis Colts (via San Francisco): QB Jordan Love, Utah State — Knowing that Philip Rivers is running out of time and that they have an extra second-rounder, the Colts jump up a few spots to avoid anyone moving ahead of them in Round 2 for Love.

32. Kansas City Chiefs: CB Kristian Fulton, LSU — Fulton is a technically sound, physical press corner who could make an immediate impact on a contender that needs some assistance at that position.

Related: Five big NFL questions entering the first round of the draft