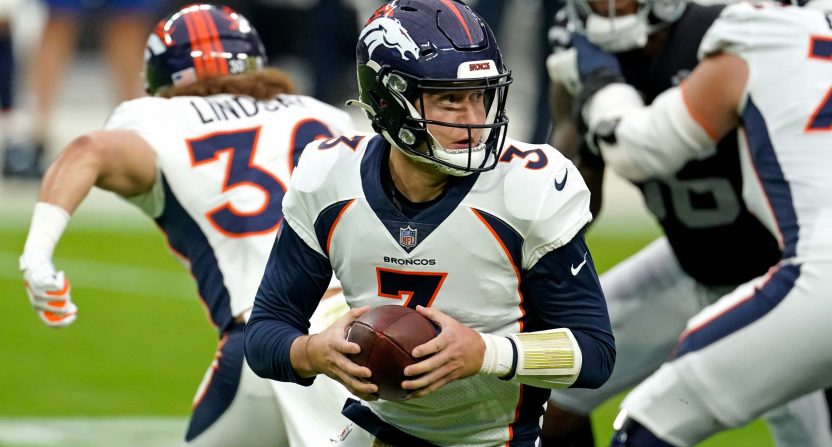 It’s too early to fully give up on Drew Lock, but at the moment, he doesn’t appear to be the Denver Broncos’ long-term answer at quarterback. And if Lock doesn’t make significant progress over the remainder of the season, the Broncos would be wise to attack the offseason as though they still need a starting quarterback.

Lock was absolutely brutal in the Broncos’ 37-12 loss to the Las Vegas Raiders on Sunday. The second-year quarterback completed 23-of-47 passes for 257 yards, one touchdown, four interceptions, and a 37.3 passer rating. The touchdown came in garbage time, and the interceptions were truly terrible.

This one-handed INT to seal the win for the @Raiders! #RaiderNation pic.twitter.com/wF7WOZJC5Z

On the season, Lock has thrown seven touchdowns and 10 interceptions, with a 66.5 passer rating over 238 pass attempts.

Denver drafted Lock in the second round (42nd overall) of the 2019 NFL Draft, and the Missouri product has shown flashes of the talent level that had the Broncos excited when they made the selection. But the 24-year-old’s play has been far too inconsistent, with inaccuracy and several bad-decision tosses accompanying the impressive throws each game. And those are that frequently doesn’t improve much for quarterbacks once in the NFL; typically, you either have it or you don’t when it comes to accuracy and decision-making.

Now, usually, you’d want to give a talented young quarterback more time before reaching definitive conclusions. Lock has made just 12 NFL starts, and while there’s some impressive young talent on the Denver offense, it’s not like he’s had a great supporting cast over these two seasons.

But a big part of the reason the Broncos should show urgency at the quarterback position is the AFC West. Denver plays in the same division as Patrick Mahomes and the Kansas City Chiefs (with Mahomes under contract through 2031), Justin Herbert (who looks like the real deal) and the Los Angeles Chargers, and a Derek Carr-led Raiders team that is 6-3 (with wins over the Chiefs and New Orleans Saints). The Chiefs figure to be division favorites for a long time, but the Chargers and Raiders also look like they will be good teams in the coming years as well.

Right now, the Broncos appear to be clearly behind these AFC West teams for 2021+, and significantly behind the Chiefs, of course. And putting aside the division title hopes in the coming years, the Broncos will have to play these teams two times apiece. Against the Chiefs (especially), the Chargers (who should keep improving with Herbert), and the Raiders, you’ll need to score a lot of points. Even if Lock makes some strides, is he going to be the guy that can win shootouts for Denver in this division? That seems unlikely.

Denver would currently have the No. 11 pick in the 2021 NFL Draft, and it’s hard to see them winning more than a couple of games — if even — over the rest of the season. While it’s unlikely that the Broncos will be bad enough to be in position to draft Trevor Lawrence (one win may have been too many in this case) or Justin Fields, they may have intriguing quarterback prospects Zach Wilson and Trey Lance at or near — if they wanted to make a realistic trade up — their pick slot. And if the Broncos have conviction in such a prospect, they shouldn’t let Lock get in the way of making the pick.