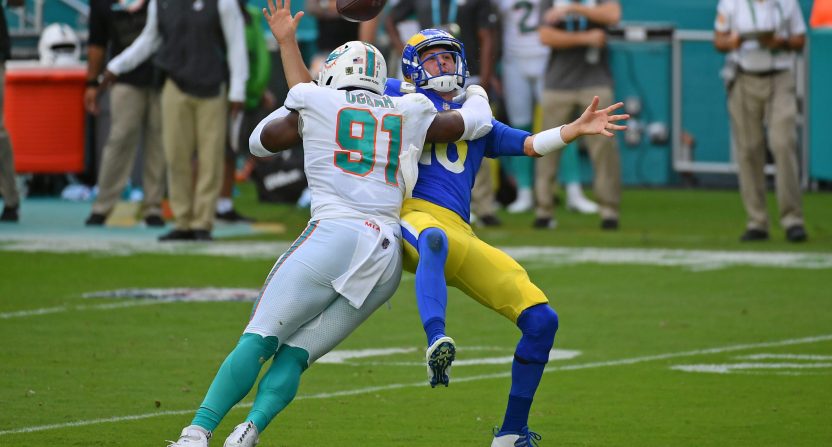 The Miami Dolphins don’t always do good things. In fact, there haven’t been too many good things in their recent history at all. But when they do, they certainly seem to go about it in the weirdest ways. Case in point, their first-half performance against the San Diego Chargers on Sunday in which they gained a grand total of 54 yards…and somehow scored 28 points.

Tua Tagovailoa got the start for the Dolphins today, ushering in a future with some excitement and potential. However, all of that excitement remains “very” potential so far as the Miami offense has sputtered. Tua hasn’t been able to get much going in the air (34 passing yards) and their leading rusher so far is Myles Gaskin, who has 22 yards on 7 carries. Altogether, including losses, their offense garnered a grand total of 54 yards in the first half.

That said, they also somehow took a 28-10 lead into the locker room. So…how?

The Rams actually struck first on a Robert Woods touchdown run to go up 7-0 early in the first quarter. Since then, though, it’s been all Fins. Tua might not have thrown for many yards so far, but he did complete his first passing touchdown on a three-yard toss to DeVante Parker to tie things up.

Tua with his first career TD pass; Dolphins tie it up. pic.twitter.com/ld0U8SHc8y

Jared Goff and the Rams responded by driving down the field in an attempt to get that one back right before the quarter ended. However, Goff instead got mauled by Emmanual Ogbah and fumbled the ball away. It was returned 78 yards for the touchdown by Andrew Van Ginkel.

Dolphins destroy Jared Goff and turn it into a long scoop-and-score. pic.twitter.com/KrzA9dth4V

Not panicking yet, the Rams took over and tried to make something happen. However, their offense sputtered and they ended up punting the ball away. That’s when Jakeem Grant returned it 60 yards for another touchdown, officially giving the Rams something to panic about.

Now the Dolphins get a punt return TD! Jakeem Grant to the house. pic.twitter.com/RtnySFtRKX

So perplexed by all of this was the Fox graphics crew mislabeling the touchdown scorer on the punt return (not to mention crediting the Rams for the previous fumble-recovery touchdown).

And as if this wasn’t enough, following Jared Goff’s fourth turnover of the half, the Dolphins added yet another touchdown thanks to Gaskin on a one-yard run.

What a day for the eleven people playing the Dolphins defense/special teams in fantasy pic.twitter.com/uVQMPqShwh

The Rams tacked on a field goal right before halftime to make it 28-10.

To really put this all in perspective, the Rams garnered 224 yards on offense to the Dolphins’ 54, 121 passing yards to Miami’s 26, have 17 first downs to Miami’s 5, and had the ball for almost 21 minutes while the Fins had it for just over nine. In other words, there’s absolutely no reason Miami should be up by three scores right now…and yet, here we are.