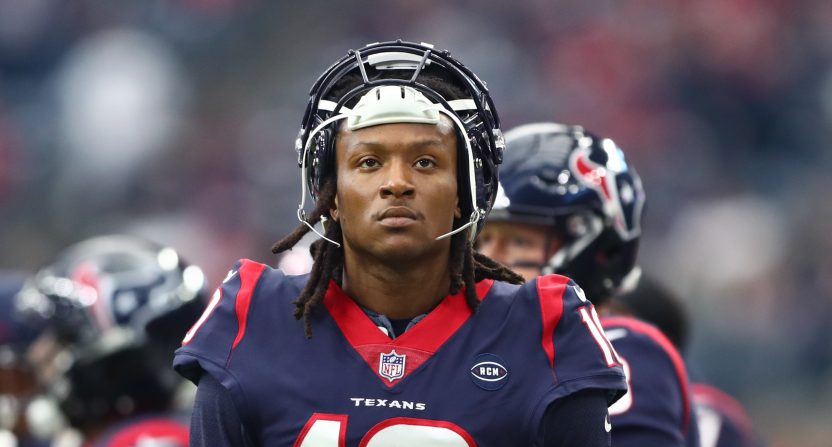 We’re deep into fantasy football draft season, which means you’re going to have to weigh risk and potential reward time and again over about a two-hour period. Which fantasy players carry the least risk entering the 2019 NFL campaign? Here are 10 who are particularly safe.

Yeah, that’s a high ADP for a non-running back, but Hopkins has gone over 1,200 yards in four of his last five seasons while scoring more than 10 touchdowns in three of his last four. He’s coming off his best season yet at age 27, which means he should only be peaking in an offense that continues to improve.

The four-time Pro Bowler is coming off three straight 1,000-yard seasons, with his touchdown total climbing in each of those campaigns. The Chiefs have a lot of offensive weapons, but they always get Kelce his catches. Now that he’s fully recovered from ankle surgery, there should be little doubt that Kelce will again make a run at 1,000 yards and 10 touchdowns in his age-30 season.

Ryan has rather quietly passed for 4,000-plus yards in eight consecutive seasons, and two of his last three campaigns have been especially huge. He takes a lot of heat but is a consistently reliably performer as a fantasy quarterback, and the Atlanta offense looks as stacked as ever entering 2019. I wouldn’t be surprised if the 34-year-old led all passers in fantasy scoring this year.

Wilson hasn’t missed a start in his seven-year career, and he consistently puts up big fantasy totals with his arm and his legs. He’s coming off his highest-rated season yet, and he should be just as strong in his age-31 season. I’d rather take Ryan or Wilson than any quarterback except maybe Patrick Mahomes.

There’s always a chance Saquon Barkley will suffer a sophomore slump, but Kamara avoided that in 2018 and now his role should increase again with Mark Ingram moving on for the 2019 campaign. Kamara is one of 10 players in NFL history to score more than 30 touchdowns in his first two seasons.

You aren’t guaranteed a dozen touchdowns from Thomas, but when you’re Drew Brees’ top target you’re going to deliver pretty consistently. And Thomas has done exactly that for three years running. Pro Football Reference has reception rate statistics dating back to 1992, and Thomas’ 2018 reception rate of 85.0 percent is the highest among receivers with 100-plus catches in that 27-year span by nearly an eight-point margin over Wes Welker. He’s also the only player in NFL history to catch 300-plus passes in his first three seasons.

The 29-year-old is coming off back-to-back big seasons in his prime, and he appears to be peaking after another step up in 2018. He’s super-consistent and reliable and there’s no reason to expect that to change with the Minnesota offense likely to score often in 2019.

The Bucs offense should get a boost from new head coach/offensive genius Bruce Arians, but even without that bump Evans is a consistent star. The 26-year-old has started his career with five straight 1,000-yard seasons, which is particularly impressive considering the lack of stability that has plagued Tampa Bay at the quarterback position. He’s only going to keep getting better, and more looks should be his now that DeSean Jackson and Adam Humphries are gone.