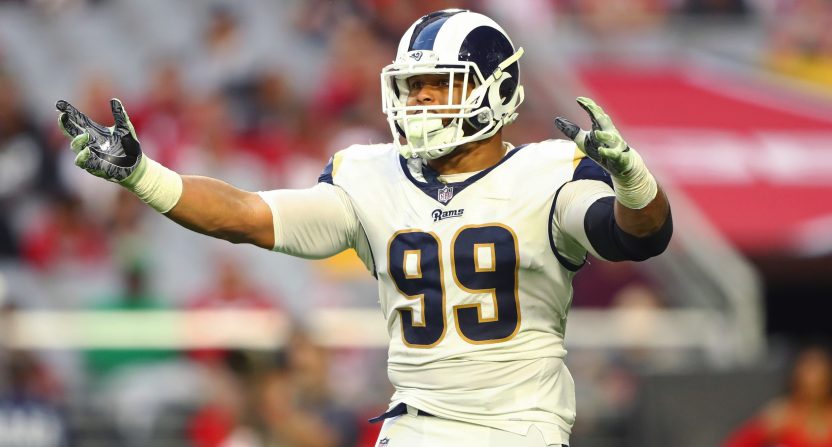 Before enjoying the NFL playoffs, let’s look back at the best and worst moments of the regular season.

Patrick Mahomes had an unprecedented season for a first-year starter. The only other player to throw for 5,000 yards and 50 touchdowns was Peyton Manning during his 2013 MVP season. Mahomes led the league in touchdown passes (50), yards, yards per attempt (8.8), and was second in passing yards (5,097). Football Outsiders rates Mahomes as the best quarterback.

Todd Gurley is so good that he missed the final two games and still led the league in touchdowns (21). He rushed for a league-high 17 touchdowns and caught four more scores. Gurley’s explosiveness from the backfield, on screens, and as a receiver is what makes the Rams offense special. Football Outsiders ranks Gurley the top overall running back. We’re not arguing against that.

Aaron Donald was an even bigger terror than he was last season when he won the Defensive Player of the Year honors. He led the league in sacks (20.5) and set a record for most by an interior lineman. In addition to having more sacks than last year (11), he also posted career highs for tackles for a loss (25) and quarterback hits (41).

Saquon Barkley became just the third rookie to eclipse 2,000 total yards (2,028). The others: Eric Dickerson (2,212 yards in 1983) and Edgerrin James (2,139 in 1999). He also set the rookie record for receptions with 91. Barkley operated behind one of the worst run-blocking offensive lines in football.

You could argue that Darius Leonard has the best rookie season by a linebacker since Luke Kuechly of the Carolina Panthers in 2013. He led the league in tackles (163), which was also a franchise record. Leonard also added seven sacks, two forced fumbles, and two interceptions.

Wasn’t too long ago we were wondering if Andrew Luck would ever be healthy enough to play again. Luck rallied the Colts from a 1-5 start to 10-6 record and a playoff berth. Luck set career highs in passer rating (98.7), completions (430), and attempts (639).

Andy Reid traded away the 2017 passer ratings leader — Alex Smith — and All-Pro cornerback Marcus Peters. The Chiefs got better, finishing 12-4 with the No.1 seed in the AFC. They led the league in points per game (33.4) and total yards per game (425.6).

Pure cocaine for football fans. A game that not only lived up to the hype but included three (?!?) defensive touchdowns. The highest-scoring game in Monday Night Football history was spectacular, featuring 1,001 total yards with both quarterbacks passing for 400. The teams combined for 14 touchdowns and it was the first time ever that two teams scored 50 points in any NFL game. So much fun we wanted it to go into overtime.

The only thing missing was the Stanford band. The desperation multi-lateral play that almost never works… worked. What made it funnier was that it happened to the most detailed-oriented coach in NFL history: Bill Belichick. The “Miami Miracle” began with Ryan Tannehill’s pass to wide receiver Kenny Stills. Stills lateraled it to DeVante Parker who tossed it Kenyan Drake. Drake ran 52 yards for a touchdown. The punctuation was a stumbling Rob Gronkowski’s futile attempt at a tackle.

Aaron Rodgers hurting is still better than most quarterbacks healthy. Down 20-0 in the third quarter, the Packers rallied for their second-biggest comeback at Lambeau Field in team history. Rodgers, who was carted off in the second quarter with a knee injury, returned. More miraculous, after the injury, he went 17 for 23 for 273 yards. Rodgers threw three TD passes in the fourth quarter, including the game-winning 75-yard score to Randall Cobb on 3rd-and-10 with 2:13 left to play.

According to Las Vegas oddsmakers, it was the biggest upset since the visiting Washington Redskins stunned the Dallas Cowboys, who were 17.5-point favorites, 24-17 in Dec. 1995. Those Cowboys went on to win the Super Bowl. The Vikings didn’t even make the playoffs but still they were expected to trounce a visiting Buffalo team with rookie quarterback Josh Allen — who was making just his third start — and playing without running back LeSean McCoy. The Bills were up 27-0 at halftime.

Derrick Henry is a late bloomer which is unusual for running backs. Most — especially a Heisman Trophy winner — get a heavy workload early. But Henry started just four games in his first two seasons. This year was his coming out party. Still, only 24 years old, Henry announced his presence with a dominating 99-yard run. In front of a national Thursday Night Football audience, he stiff-armed three Jacksonville Jaguars on his way to tying NFL history. The only other person with a run that long was Hall of Famer Tony Dorsett.

Sometimes referees get in the way of phenomenal plays. On a 3rd-and-8 pass from the Texans’ 19-yard-line, DeAndre Hopkins used his go-go gadget arms to snare a deep pass from Deshaun Watson with one hand against the Dolphins. The first-down catch was a thing of sheer beauty and displayed his unearthly athleticism. The play was negated due to off-setting penalties. #Boo

Remember when the Jaguars were 2-0 after beating the Patriots 31-20 in September? Man, that feels like decades ago. New England allowed Blake Bortles to pass for 376 yards and four touchdowns. One of his completions was this catch by Cole, which looked like something out of The Matrix. The football seemed to magnetically stick to Cole’s hand while he was sprinting down the sidelines.

This throw tells you why Jared Goff was the No.1 overall pick of the 2016 draft. There are very few people on this planet who can make this play. The degree of difficulty is insane. Against the Minnesota Vikings, Goff is on the move sprinting to his right. Wide receiver Cooper Kupp is not only double covered, but he’s in the corner of the end zone. The football looks like it’s going to sail out of bounds. No. Goff drops it in perfectly for the score.

The Chiefs were about to be upset at home by Baltimore. Down 24-17, it was fourth-and-9 from their own 40-line with 1:28 left. But when you have Patrick Mahomes, you have hope. Mahomes, avoiding pressure, scrambled to his right and uncorked a bomb against his body that somehow found Tyreek Hill for a first down. The Chiefs won 27-24 in overtime.

Blake Bortles is the worst veteran starting quarterback in the league. But even for him, this was a new low. He did something rarely seen in an NFL game. Bortles, who is 6-foot-5, threw a pass that bounced off the back of an offensive lineman’s helmet and then landed into the eager arms of Kansas City cornerback Steven Nelson for an end zone interception. You couldn’t replicate this turnover if you tried.

This play encapsulated Green Bay’s entire season. The Packers, trailing 29-27, had a chance to score a major upset against the then-unbeaten Rams. All they needed to do was give Aaron Rodgers a chance. That didn’t even happen. Why? Because a running back who wears the number 88 went rogue. In the final minutes, Ty Montgomery was told specifically to not take the ball out of the end zone on a kickoff. He did. He fumbled. He was traded two days later.

Kickers in the NFL have never been better in terms of accuracy. So, when you have an epically horrendous performance, it gets noticed. Mason Crosby missed four field goal tries and an extra point in a 31-23 loss at the Detroit Lions. Three of the field goals attempts were from makeable distances of 41, 42, and 38. He also missed a 56-yarder. Crosby went 1 for 5, nailing his final try from 41 yards.

He missed two field goals and two extra points against Detroit. What makes it more incredible? He hit the upright on all four kicks! The Bears won 34-22, but one Chicago fan is fed up, starting a GoFundMe page to buy out Parkey’s contract. (The page is no longer active.).

Deshaun Watson is lucky he didn’t wind up in hospice. He deserves hazard pay and a hug. He’s been hit a league-high 126 times and sacked a league-high 62 times. Watson was so banged-up that he had to take a 12-hour bus ride to Jacksonville due to a bruised lung and injured ribs. It’s a miracle that he started every game for the Texans (11-5). Houston is also bad at run-blocking.

Atlanta Falcons receiver Mohamed Sanu is famous for being perhaps the best non-quarterback passer in the game. For his career, he’s 6 for 7 for 228 yards and three touchdowns. This season, Beckham went 2 for 2 for 106 yards and two touchdowns. The first one was a 57-yarder to Saquon Barkley against Carolina. The second was a 49-yard bomb to Russell Shepard against Chicago. Beckham became the first wideout with multiple touchdown passes in a season since Antwaan Randle El threw two in 2010.

You can’t beat Dalvin Cook’s limbo dance. After scoring on a 26-yard screen pass against Green Bay for his first touchdown of the season, Cook caught everyone by surprise. The choreography on this celebration is hilarious because you’re initially wondering: why is Adam Thielen is jumping on top of his offensive linemen? When Cook comes dancing underneath Thielen followed by Stefon Diggs and Brian O’Neill, LOL.

This seems like a math riddle. Trailing 28-12 in the third quarter, the Brock Osweiler directed the Dolphins on a 14-play drive that lasted 7:34. It resulted in a punt from the Green Bay 38 that landed in the end zone for a touchback. Miami lost 31-12.

Ryan Fitzpatrick threw for 403 yards and yet Tampa Bay failed to score a touchdown in a 16-3 home loss to Washington. He was intercepted twice and lost a fumble. Fitzpatrick had more 400-yard passing games this season (four) than Brett Favre had in his entire 19-year career (2).

Against the Cleveland Browns, the Steelers treated a short kickoff like a punt. They decided not to field it. Problem is: it’s live ball. After 10 yards, any team can recover it. The Browns grabbed it at the Pittsburgh 24-yard-line. Amazingly, this is not the first time this has happened to the Steelers. Way back in 1990, Barry Foster made an even worse blunder.

“We lost, but I’ve got a beautiful wife I get to go home to, boy. I’m going to try to make some babies, man.”

For 19 years, since he took the field as a freshman at Ole Miss, we have had Eli Face. Through good times and bad, each week we could always count on Eli Face. It was our rock. The thing that bound us all together.

If Eli Face is gone forever, I fear our nation will soon follow. pic.twitter.com/ukzikTYk9q