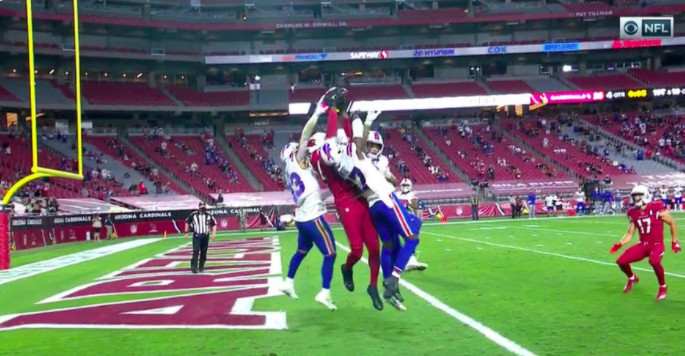 Before enjoying the playoffs, let’s look back at the best and worst moments of the 2020 NFL regular season.

Aaron Rodgers finished with the second-highest single-season passer rating in NFL history (121.5), only surpassed by his 2011 MVP season (122.5). Rodgers led the league in touchdown passes (48), adjusted net yards per pass attempt (8.89), and completion percentage (70.7). And he did so with only one consistent wide receiver, Davante Adams (115 catches for 1,374 yards and 18 touchdowns). It’s amazing how easy Rodgers can make the game look.

Derrick Henry keeps getting better. He’s just the eighth player in league history to reach 2,000 rushing yards in a season. For the fifth time since entering the league as a rookie out of Alabama, he has increased his carries (378), yards (2,027), and touchdowns (17). Henry won two games in overtime for the Titans with a 29-yard touchdown at the Baltimore Ravens, and a five-yard score against the Houston Texans. Plus, his stiff arm is vicious.

The biggest knock on Aaron Donald (13.5 sacks and four forced fumbles)? He wasn’t as statistically dominant like when he collected 20.5 sacks two years ago. But he gets so much attention that it allows others to thrive. He’s the main reason why the Rams have the top overall defense in terms of total yards (281.9) and points allowed (18.5).

If you didn’t know anything about Justin Herbert, you’d be shocked to learn he was in college last year. Herbert (4,336 yards, 31 TD passes to 10 INTs) is the most impressive rookie quarterback ever. Nobody saw this coming. Not even the Chargers, who were forced to start him after the team doctor punctured quarterback Tyrod Taylor’s lung before kickoff against the Kansas City Chiefs.

For the second straight season, an Ohio State alum will probably win this award. Chase Young entered the league with a lot of hype, especially after the success of his former Buckeyes teammate Nick Bosa, who won the 2019 award for San Francisco. After a slow start, Young (7.5 sacks, four forced fumble, three fumble recoveries, and a TD) has come on strong.

For the first time since 2002, the Browns are in the playoffs. That alone should make Kevin Stefanski a unanimous winner for this award. Stefanski succeeded thanks to a rebuilt offensive line (signed Jack Conklin from the Titans and drafted rookie Jedrick Wills from Alabama with the 10th overall pick). The Browns have the third-best rushing offense (148.4), with Nick Chubb and Kareem Hunt leading the way.

Alex Smith’s return from a gruesome injury is inspiring. To just make it back on the field after missing 2019 due to surgeries and rehabilitation was a major achievement. The WFT went 5-1 in his starts and reached the playoffs.

This game was nuts, especially the end (27 points in the final 6:33). No one expected a shootout. No one expected last year’s MVP to heroically return after a possible bathroom break to lead his team victory. Baker Mayfield led 75-yard drive in under a minute to tie the score at 42 with 1:04 left. No sweat for Lamar Jackson. He drove the Ravens down the field for Justin Tucker’s 55-yard field goal with second to go. A safety at the end was meaningless, unless you were a gambler.

Buffalo had just gone ahead when Stefon Diggs made a terrific diving catch in the end zone with 34 seconds left. But that turned out to be too much time left for Kyler Murray and DeAndre Hopkins. The degree of difficulty on this Hail Mary is jaw-dropping. At midfield, Murray rolled to his left, while evading a sack attempt and threw against his body. The prayer was hauled in by Hopkins despite being surrounded by three defenders. Outstanding.

The Jets (0-13) were on their way to winning the Trevor Lawrence sweepstakes in the draft. The Rams (9-4) were a 17-point favorite. And according to ESPN, teams favored by 17 or more points were 101-10 straight up. This victory was not celebrated by Jets fans.

Adam Gase presided over what looked to be one of the worst teams in NFL history and deserved to be fired. The Jets (2-14) lost their first six games by a combined total of 110 points. For four games, the starting backfield featured the fossilized remains Joe Flacco and Frank Gore. They lost a game because their bounty-loving defensive coordinator went rogue . The quarterback Gase was hired to fix got worse (Sam Darnold), and the quarterback that left him (Ryan Tannehill) got better.

Yes, Philadelphia had the worst pass-blocking offensive line in football. And the Eagles had lousy wide receivers. But in a salary cap league, when you’re one of the highest-paid players in the league, you have to produce. Factoring in his salary, Wentz was arguably the worst player in the NFL. Football Outsiders ranked him last among all quarterbacks.

Speaking of Philadelphia, Eagles fans must be seething. Nelson Agholor,  the subject of mockery in Philadelphia, enjoyed a career season in receiving yards (896), yards per catch (18.7), and tied his career-best with touchdowns (8). For a wideout who was infamous for his bad hands, he dropped only two passes. Agholor’s signed a 1-year contract for $1 million. He made $9.3 million last season.

Ryan Fitzpatrick has quarterbacked eight different teams, including three in the AFC East. Considering he was a seventh-round pick out of Harvard in 2005, that’s remarkable. But nothing he has done was as stunning as this completion with a facemask penalty that spun his head around like The Exorcist. The pass set up a game-winning field goal to beat the Raiders. Fitzmagic!

Throws like this remind you why the Eagles signed Wentz to a 4-year, $128 million contract in June 2019. The ball placement here is spot on. Wentz delivers the pass in a place where only his receiver – running back Boston Scott – can make a play on it. It’s either going to be a touchdown or sail of out bounds.

This is a perfect pass. Unfortunately for the Chiefs, it was called back due to a penalty.

This is a perfect pass. Fortunately for the Chiefs, it helped them rally from a 17-9 halftime deficit.

Wide receiver Jarvis Landry enjoyed his best throwing season ever (4-for-4 for 74 yards, one touchdown, and a perfect passer rating of 158.3). That lone touchdown pass came on a beautiful play. After taking a ball on a reverse from Nick Chubb, Landry uncorked a bomb to Odell Beckham Jr. for a 37-yard score.

Worst pass that DIDN’T result in an interception: Andy Dalton, Dallas Cowboys vs. the Arizona Cardinals

Andy Dalton’s first start for the Cowboys could be summed up in one horrific throw. With Dallas backed up deep in its own territory, Dalton first thought about going deep. But then under pressure, he floated a pass that should’ve been picked off.

Andy Dalton throws the worst pass in NFL history and it's somehow not intercepted pic.twitter.com/kmcdI8cd19

Tom Brady might be the GOAT, but here he was simply the goat. In a 38-3 home loss, the 43-year-old played like the oldest player in the league. Brady was 22-of-38 for just 209 yards with three interceptions. Among those picks, this was absolutely awful.

A 5-foot-9 cornerback matched up against 6-6 tight end Darren Waller. Easy touchdown, right? On 3rd-and-8 from the 13-yard line, Raiders quarterback Derek Carr fired into the left corner of the end zone. Moore’s incredible one-handed snag was one of the most impressive interceptions ever.

Daniel Jones will never live this down. According to Next Gen Stats, he reached a top speed of 21.23 MPH, the fastest by any quarterback in two years. But when Jones tripped, his own teammates laughed. Jones inspired some amazing memes, like this one:

The internet wins again.
Recap of Giants win probability at the end of the game… in Daniel Jones form 😂😭 pic.twitter.com/xICjt9whao

This is one of the greatest feats of athleticism and effort we’ve ever seen. Freakish wide receiver DK Metcalf chased down Arizona safety Budda Baker to prevent a defensive touchdown. This play not only redeemed Metcalf for his gaffe against the Dallas Cowboys. It was also hailed by coaches at every level on why you should never give up on a play.

It’s one thing for a team to convert third-and-long on a miraculous pass or a penalty. Allowing this against a banged-up team was inexcusable. San Francisco was on its own 11 and facing a 3rd-and-31. The 49ers ran a simple toss play to Jerick McKinnon, who exploded for a 55-yard burst.

As mentioned earlier, the Eagles’ offensive line was terrible. Jamon Brown was part of a dreadful performance against the Baltimore Ravens, as Philadelphia allowed six sacks. Check out Brown (No.66) hitting his own quarterback. Poor Wentz.

Jamon Brown has 0.5 sacks on the year. pic.twitter.com/aWQ8GKbox1

This game was practically over. All Atlanta had to do was pick the ball up. Instead, five Falcon players watched the ball bounce for 10 yards. Once it did, Dallas recovered and eventually won the game on a 46-yard field goal.

Stephen Gostkowski, signed as a free agent from New England, had a near disastrous debut. Gostkowski missed three field goals (one was blocked) and an extra point. Luckily for Gostkowski, he connected on a 25-yarder in the final minute to give Tennessee a 16-14 victory.

It’s clear that Jamie Collins didn’t mean anything malicious. Still, every professional athlete knows that you can’t touch the officials. Collins was apparently upset that running back David Montgomery had illegally lowered his head on a run. So, he demonstrated to referee Alex Kemp. The linebacker was immediately ejected.

Cleveland deserves to enjoy every moment of a breakthrough season. In fact, you might want to roll out the red carpet and have Baker Mayfield slide in as a paparazzo.

Kirk Cousins has the rhythm of an octogenarian on crutches.

He gave it his all @brgridiron

Practicing good hygiene… Everybody know how the orange slices be. https://t.co/HgdgCUH0Xa

“(Touchdowns) are like Pokemon to me. I gotta have ‘em all.”

.@dkm14 and touchdown passes: gotta have 'em all 😂 pic.twitter.com/IZcMbkMdaU

When someone tells you pineapples belong on a pizza. https://t.co/rtIaarCdvz

Bill Belichick is fed up pic.twitter.com/Nh6AQqJyDK

This season summed up in one picture: