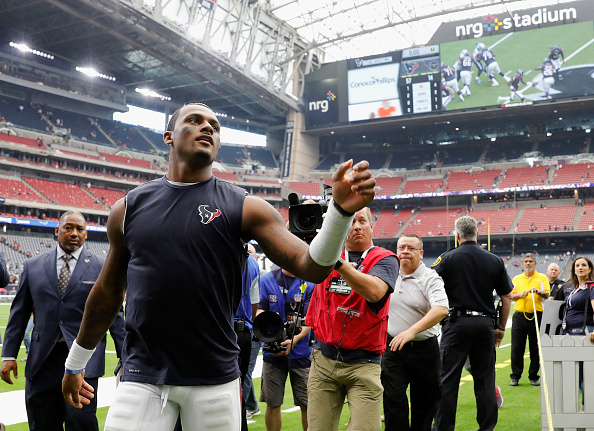 You don’t have to know too much about the NFL to know that having a long-term franchise quarterback to build around is the most fundamental way to put your team in a position to win. The Houston Texans have that quarterback in Deshaun Watson. And yet, it appears that instead of doing the obvious thing that you’d expect them to do (make sure he’s happy), they’ve seemingly done everything they can to drive him to another franchise. And every day, it appears they’re closer and closer to making that happen.

The strife between the Texans and their star quarterback as well in play before the 4-12 disaster of a season they just went through.

You can start by looking back at last year when the team traded away Pro Bowl wide receiver DeAndre Hopkins, depriving Watson of his best target.

Then, as the franchise looked for a new GM, they were given a couple of recommendations from a search firm they’d hired. At the top of the firm’s list was Pittsburgh Steelers vice president of football and business administration Omar Khan, followed by ESPN Monday Night Football analyst Louis Riddick. The two candidates, both people of color, would have made for transformative hiring that Watson was reportedly very excited about. Instead, Texans’ owner Cal McNair ignored the recommendations and hired former New England Patriots director of player personnel Nick Caserio, a move that upset many people in the organization, including Watson.

The Texans had a miserable 2020 season, finishing 4-12, though you can’t blame Watson for that result. The star quarterback still did what star quarterbacks do, put up huge numbers that sat atop the league leaders. All the more impressive given the way Houston played. No wonder J.J. Watt told Watson he was sorry the team had “wasted” his year. One certainly doesn’t get the sense that 2021 will be a huge improvement for the franchise either.

Deshaun Watson just finished the season with an NFL-high 4,823 Pass yards but a 4-12 record. He's the first player to lead the NFL in pass yards with 12+ losses since Jeff George for the 1997 Raiders. https://t.co/VwwRd9RRpq

Now, as the Texans look for a new head coach, it seems like it would be an ideal time for the franchise to consider rebuilding a bridge to Watson. The QB has reportedly championed Chiefs OC Eric Bienemy as his preferred candidate, and interviewing Bienemy would be a slam dunk for the Texans, who are in desperate need of a PR win. Instead, the team has decided not to interview him, driving home the notion that the McNairs, who have a history of making insensitive comments about people of color and the Black Lives Matter movement, are making some very specific hiring choices based on factors beyond the football field.

All of which is to say that it sounds like Watson has had enough and the potential for a trade is very real.

Reports about Deshaun Watson's unhappiness with @HoustonTexans are accurate and sources close to the QB say he is still angry about team's insensitivity to social justice, including hiring practices, after the franchise failed to interview Chiefs OC Eric Bienemy this past week.

Per Mort, there are already some wheels churning about a trade demand that would send him to the Miami Dolphins with Tua Tagovailoa (and much more) coming to Houston.

Sources say Watson could play hardball with Texans about a trade. His new $156 million contract includes a no-trade clause but informed speculation from a source is that he would consider the @MiamiDolphins in which Tua Tagovailoa and additional compensation goes to Houston.

For now, we enter the offseason period where there will be some denials, some PR gamesmanship, and some face-saving attempts by the Texans as they try to satisfy their $156-million-dollar star. But the writing does appear to be on the wall and it sure seems like a solid bet that Deshaun Watson will be suiting up elsewhere sooner than later.