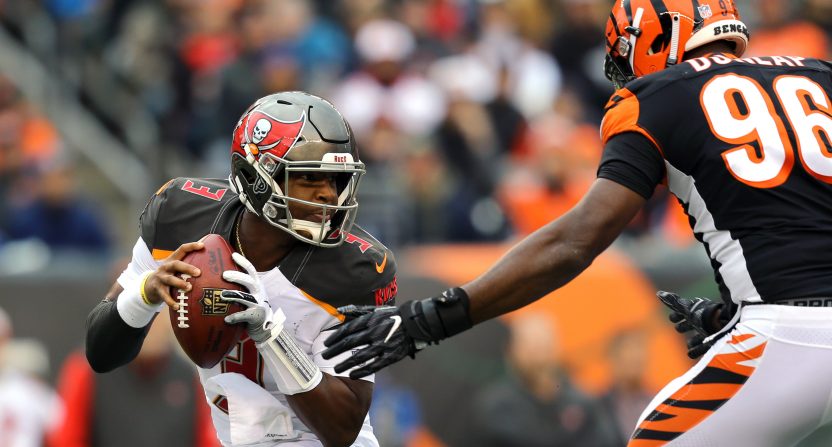 The Jameis Winston era in Tampa Bay, on its fourth year of a stormy, once-hopeful tenure, is crashing ceremoniously to the earth. Winston threw four picks in a loss to Cincinnati last weekend and coach Dirk Koetter yanked him, launching another round of Ryan Fitzpatrick domination.

This could mark the end of Winston’s career in Tampa, and even as a legitimate NFL starter. The former No. 1 overall draft pick is a turnover machine and isn’t exactly a fan favorite — the numerous sexual assault allegations and three-game suspension to begin this year unsurprisingly haven’t produced much goodwill.

Fitzpatrick will get the start this week against the Panthers, indicating that Winston, who is in the final year of his rookie contract, could be done in Tampa.

Contract complications could impel the Bucs to sit Winston for the rest of the season if they decide he isn’t worth a second contract. With Tampa having picked up his fifth-year option for 2019, they could safely let him walk in the offseason without a cap hit, but if Winston fails a physical in the spring, they will have to pay $20.992 million regardless of whether they want him to stick around.

Risking an injury to Winston, and thus a damaging cap hit, isn’t worth it if the Bucs don’t see him as the future. (Per SB Nation, the Redskins went through a similar situation in 2015 with Robert Griffin III and Kirk Cousins.) It’s a tricky predicament, and it potentially robs Tampa of the ability to further test Winston’s long-term worthiness.

Answering that question without jeopardizing next year’s precious cap room will be difficult. Winston has shown brief glimpses of potential amid a sea of overthrows and interceptions. The raw arm strength is still there, as demonstrated by the number of bullets he’s completed on crossing routes. (Tampa Bay run about 700 crossing routes per game.) He threw a pretty 60-yard touchdown to DeSean Jackson against the Bengals.

But this is his fourth year as an NFL starter, and the nervy mistakes haven’t been eradicated. Winston has been full of turnovers for his entire career, and it’s only getting worse as the Bucs’ offense deteriorates around him. Last year, he produced 15 fumbles (Tampa lost seven of them) and threw 11 picks in 13 games, only a slight upgrade on the 18 he threw in 16 games in 2016.

Winston has developed into a true turnover machine at this point. He’s thrown 10 interceptions in four games, skyrocketing his interception rate from a career average of 2.83 to a monstrous 6.8. The second-worst interception rate in the NFL this season is 4.1, held by CJ Beathard. Winston is lapping the field in the category.

Some of the picks weren’t entirely his fault — you don’t produce a rate that horrid without some amount of bad luck. His second interception of the Cincinnati game was tipped as Winston faced a free-running blitzer, and one brutal goal-line pick in Atlanta caromed off a helmet in the end zone.

Nevertheless, all of his other eight INTs this season were overthrows, underthrows or simply bad decisions. He’s making errors NFL quarterbacks shouldn’t be making.

Oddly, many of his mistakes have a fluky feel, as though they wouldn’t be expected to happen with regularity given how overtly bad they were. For example: If an MLB second baseman boots a routine grounder, you don’t immediately crucify him as a poor defender, understanding that one-off mistakes happen. Wild overthrows and simple misidentifications of coverage defenders happen to even the best NFL QBs.

Winston does it at a frequency that has made him unplayable from the perspective of a coaching staff fighting for their jobs. At this point, when Winston overshoots an open Mike Evans by 20 yards, it’s far from a fluke. It’s an indictment of his ability to be a starter at this level.

Small blunders tear down his whole operation. He tends to misread deceptive zone coverage schemes. Sometimes he feels pressure and panics in the pocket. Occasionally he will get happy feet, messing with rhythm and timing and forcing throws off his back-foot.

On this overthrow intended for Evans, keep an eye on his right elbow and how it stays down prior to his throwing motion:

That elbow has to come up as Winston begins his motion. When it stays pinned, the ball can sail. This little error is at the root of many overthrows.

Winston’s overall QB mechanics don’t stand out as problematic. He generally moves his feet well in the pocket, and while he’s a natural playmaker, he hangs in there long enough to let his receivers run their routes. There are no obvious, consistent mechanical issues holding him back.

Maneuvering himself around blitzes should be a central point of improvement. The Bucs’ offensive line is dreadful, forcing Winston to improvise and throw quickly as teams generate pressure from all angles. He struggles to understand when and how to step up in the pocket as edge-rushers collapse the tackles; recognizing how much time you have and what you can do in that time is a complicated art. Winston hasn’t mastered it.

At times, he’ll feel pressure and decide that he has to target the first semi-open receiver he sees. He tries to do too much when he senses any ounce of penetration, even if that sense is misguided. In the instance below, he throws off his back-foot into a window that never really existed after backing away from minuscule pressure:

His linemen may or may not have been egregiously holding there — left guard Ali Marpet appears to be, at least. Winston seems resigned to immediate pressure, even if there was little in reality.

Most damaging of Winston’s on-field flaws: He hasn’t been a difference-maker at helping free receivers and pry open slivers of space. He keeps his eyes downfield, but he rarely looks off defenders, and when he scrambles, he hasn’t set his feet and taken advantage of improvisation downfield. The best quarterbacks find and create gaps. Winston hasn’t done that.

I showed some Winston plays to my dad, who was a Division III quarterback. One of his big takeaways? “I haven’t seen him try a pump fake once.”

Dirk Koetter’s unimaginative offense doesn’t help anyone. Bucs receivers rarely get open, and when they do, it’s a result of pure speed (DeSean Jackson) or pure elusiveness and talent (Evans). Winston sometimes doesn’t have any options, and his pocket collapses quickly with the weak offensive line. Rookie running back Peyton Barber is still learning how to block.

Winston, though, lacks consistent accuracy. His ceiling lowers by the game. At this point, he is an at-best average NFL quarterback with barrages of costly turnovers preventing him from reaching even that. His strong arm and improved running skill help him make plays, but every risk he seems to take turns out to be a bad one.

He’s put Tampa in a tough predicament. That Fitzpatrick has played as well as he often has in the same situation as Winston does not help the Florida State product’s case for being the long-term answer. The Bucs would have to search for new QB if they discard Winston this offseason, a tough realization given that just four years ago they had the draft’s No. 1 pick. NFL teams don’t like these kinds of sunk costs.

Hope is fleeting for Winston. It’s difficult to foresee some major improvement happening. This could be how the Jameis era in Tampa will ultimately end.