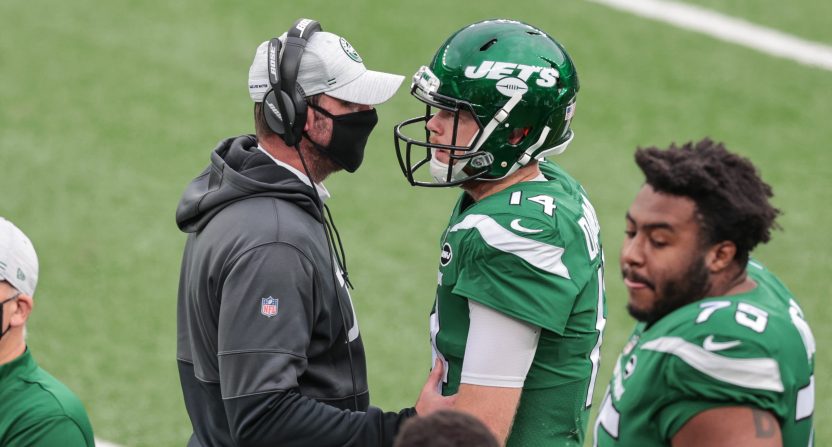 It’s not easy being the worst. Even when a football team is tanking in pursuit of the No. 1 overall draft pick. Random stuff happens. A turnover here, an injury there, a special teams mistake anywhere, and a lousy squad can luck into few victories.

This brings us to the New York Jets. Flashback to early September. Before the start of the season. When optimism still existed. Jets general manager Joe Douglas said, “I’m not going to be happy until we win a Super Bowl.”

Well, he must be ensconced in misery, because his team has never been further away from a championship. Douglas is presiding over what could be one of the worst teams of all-time.

The Jets (0-9) are on the superhighway to Crapville. That’s saying something for a laughingstock of a franchise that hasn’t been to the Super Bowl since January 1969.

There’s an excellent chance for New York to go 0-16. The Jets have the sixth-toughest remaining schedule in the league. Five of their next seven opponents have a winning record. Their best chance for victory might be this weekend at the Los Angeles Chargers (2-7). Then they face the Miami Dolphins (6-3) and Las Vegas Raiders (6-3) at home, travel to the Seattle Seahawks (6-3) and Los Angeles Rams (6-3), and play host to the Cleveland Browns (6-3). This death march concludes in Foxborough to face the New England Patriots (4-5).

How do you define the worst?

If it’s strictly by margin of defeat, probably no team will ever match Tampa Bay, which was outscored by an average of (egads!) 20.5 points per game.

However, give the 1960 Cowboys and the 1976 Buccaneers a pass. They were expansion teams. You can make a valid excuse for the 1982 Colts, too. They never played a full schedule due to the strike-shortened season. So, you could argue that only two teams deserve to be in contention for worst of all-time: the 2008 Lions and the 2017 Browns.

No one expected New York to make the playoffs. Especially after trading away their best player in All-Pro safety Jamal Adams for a pair of first-round draft choices. But the fact that they have been an epic failure is surprising. Even by lowly Jets standards.

Douglas deserves some of the blame. This is only his second season. He’s only overseen one draft. The roster might only have three players who could start for any other team: rookie offensive tackle Mekhi Becton, cornerback Brian Poole, and wide receiver Jamison Crowder. Other than that, it’s the Island of Misfit Toys.

Sam Darnold, the third overall pick of the 2018 draft, isn’t the answer at quarterback (his development has been handicapped by mismanagement). And now, due to Darnold’s shoulder injury, the Jets are starting the fossilized remains of Joe Flacco.

More heat has been directed at coach Adam Gase, whose record in two years with the franchise is 7-18. He has been arrogant, inflexible, and incompetent. So, clearly the Jets have what it takes to go winless.

The season summed up in one video:

Dan Orlovsky running out of the back of the end zone for a safety might be the worst play in NFL history. The Lions, believe it or not, weren’t expected to be bad. They weren’t the longest shot in the preseason odds to win the Super Bowl, and their under/over win total was 6.5.

Detroit was trying to win. The Lions were 7-9 the previous year, and Rod Marinelli was in his third season as coach. Heck, they went 4-0 in the preseason which raised playoff hopes. The optimism quickly dissolved when they lost their first four games by a combined score of 147 to 66. The closest game Detroit played all season was the 12-10 loss at Minnesota, when Orlovsky forgot the length of the end zone.

With the No. 1 overall pick in 2009, the Lions selected quarterback Matthew Stafford.

The season summed up in one video:

Cleveland might have avoided history if not for this infamous fourth-down drop by Corey Coleman. His failure sealed the outcome in a 28-24 season-ending loss to the Steelers.

Credit the fans with a sense of humor. To commemorate the 0-16 season, they threw a parade.

The Browns were coming off a 1-15 campaign. Their projected under/over on victories was the second-lowest (4.5). But hey! Things could only get better in the second season under Hue Jackson, right?

Like the 2008 Detroit Lions, Cleveland went 4-0 in the preseason. Then reality hit. The Browns were so lucky. They lost six games by one-score, including two in overtime.

Rookie quarterback DeShone Kizer threw a league-high 22 interceptions, including six in the red zone. He piloted the lowest-scoring offense (14.6) in the NFL.

The defense allowed the second most points (25.6), but at least, it had star rookie defensive end Myles Garrett (7 sacks in 11 games). Interesting sidenote: Cleveland’s defensive coordinator was Gregg Williams who currently runs the defense for…. the Jets.

With the No. 1 overall pick in 2018, the Browns selected quarterback Baker Mayfield.

The Jets have been competitive recently. New York played its best game of the season against the Patriots with Flacco passing for 3 touchdowns. Their best chance at victory is this weekend at the Chargers. They’ve had two weeks to prepare for rookie quarterback Justin Herbert. And L.A. has been notoriously unlucky. All of its losses have been by one score.

But if New York loses that game, 0-16 probably will happen. Jets fans won’t even have a chance to throw a parade.