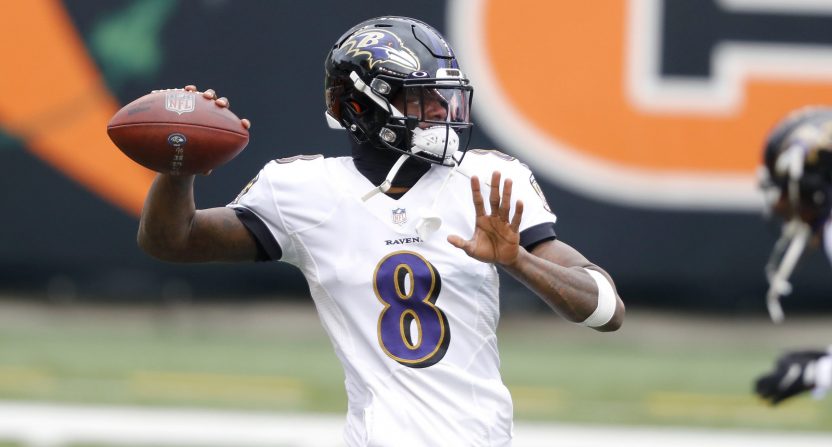 The Divisional Round of the AFC playoffs might be a glimpse into the NFL’s future. Each of the four quarterbacks still alive will likely be with their teams for a long time, and three of them are MVP-caliber.

The contrast with the NFC is striking. Tom Brady, Drew Brees, and Aaron Rodgers are still reigning above the competition in old age. Compare the NFC quarterbacks to Patrick Mahomes, Josh Allen, and Lamar Jackson, and you find a representation of the broader NFL in recent years: split between win-now contending teams built around aging Hall of Fame pocket passers, and younger teams with a mobile quarterback in his early-to-mid 20s.

Two more old quarterbacks went down in the Wild Card round. Phillip Rivers and the Indianapolis Colts came up narrowly short against the Buffalo Bills, with late-game failures, close referee calls, and kicker shenanigans among the familiar Rivers postseason pitfalls. Ben Roethlisberger and the Pittsburgh Steelers barfed up a 28-0 first quarter deficit to the Cleveland Browns, and then went out in a blaze of glory, eventually losing 48-37 (scorigami!) after a bizarre Roethlisberger performance and a game-losing fourth-down decision.

Apart from Russell Wilson (and, in the past couple years, Ryan Tannehill), there has been a dearth of quarterback talent in the gap between the old guard and the newer group. We’ll get to see a referendum on each class as one fades away and one fends off the final challenges to its newfound crown. Brees seems to be approaching retirement. Brady isn’t done yet, but he is 43. Rodgers, back to his old MVP level this season, is 37. The AFC is the polar opposite.

The Bills-Ravens and Chiefs-Browns matchups this weekend have clear favorites (Bills and Chiefs), but have thrilling potential as shootouts and displays of offensive talent. Here are some keys and interesting things to watch in those two games:

No team blitzes more than the Ravens, and no team is more successful attacking the blitz than the Bills. That creates an interesting give and take. Josh Allen has faced a ton of blitzes this season and has generally torn them up, while the Ravens derive much of their defensive success from rushing the quarterback.

Buffalo’s receivers, particularly Stefon Diggs, are studs, and will go up against Ravens defensive backs who can play man-to-man. Marlon Humphrey will likely be a handful for Diggs, and with Marcus Peters on the other side, the Ravens present more of a challenge in the secondary than the Colts did.

While Baltimore’s defense has hit its stride of late, there were stretches against the Tennessee Titans in which Ryan Tannehill and co. found success in the passing game. Had Mike Vrabel not decided to punt in a couple of crucial instances, the game may have turned out differently. It was the Ravens’ ability to completely shut down Derrick Henry (holding him to 18 carries for 40 yards) that drove their success.

Contrary to the Titans, there’s no expectation that the Bills are going to run the ball as any core part of their offense. Running back Zack Moss is out after getting injured against the Colts, and while Allen will threaten as a runner, it’s hard to see the Bills doing much of anything on the ground. Their emphasis on the pass, in addition to their success against blitzes, makes the Bills a tough matchup for the Ravens.

As expected, the Ravens focused on running the ball against Tennessee. Jackson produced heavy yardage on the ground, including his ridiculous 48-yard touchdown near the end of the second quarter, and the Ravens were one of just three teams during Wild Card weekend to produce a positive EPA per run play, per rbdsm.com. They had modest success passing the ball as well, but they primarily relied on runs against the Titans.

It may take more to keep up with the Bills, a team that improved on defense as the season went on. The Ravens don’t have a true number one receiver like Diggs, and while Mark Andrews is a threat at tight end, Jackson doesn’t have the luxury of throwing to Cole Beasley or Gabriel Davis, either. The lack of wideouts requires creative play-calling from offensive coordinator Greg Roman.

Against Tennessee, that play-calling didn’t really show up. Jackson had to do a lot himself, and their most effective passing plays came from RPO-type plays and Jackson scramble drills. They will need to do more if they’re going to keep up with Allen, who will gain yards and score points. Despite coming back from an early 10-0 deficit against the Titans, Baltimore has had a hard time playing from behind against good teams over the past two seasons. Part of that is their struggles throwing downfield, which can be attributed to Jackson’s deficiencies, Roman’s play-calling, and a shortage of receiver talent.

If the Ravens are able to overcome this surging Bills team, it will likely be because Jackson made the offense greater than the sum of its parts.

There has been some discussion that the Browns are the right team to upset the defending champs. The reasoning is that Cleveland is a run-first team and can thus keep hold of the ball for longer stretches, forcing Patrick Mahomes to stay on the sideline. I’m not sure there’s any truth to that, even if the Browns are good at running the ball and the Chiefs struggle to stop the run. Kansas City’s run defense finished 27th in average EPA in the regular season.

When it comes down to it, the key for the Browns will be keeping up to some extent with Mahomes and the Chiefs. That means they will have to throw the ball, and Baker Mayfield will have to perform as well as he did for most of the game against the Steelers in the Wild Card round. Mayfield is not always consistent, and there’s a case to be made that he holds them back, but he undoubtedly has a high ceiling as a quarterback. His fourth quarter heroics in Week 14’s 47-42 loss to Baltimore proves as much. To beat Mahomes, he’ll have to keep that up for the entire game.

The Chiefs will put up points on demand, even as the Browns return crucial members of the secondary from the COVID list. It’s hard to see a path to victory for Cleveland. It may take a 49ers-in-the-NFC-championship-type performance in the run game to keep it close, and injuries to offensive linemen make that less likely. There are indications that they aren’t as dominant running the ball as it may seem — they’re only ninth in rush EPA this season. Anything is possible, but the Chiefs shouldn’t have too tough of a time advancing.