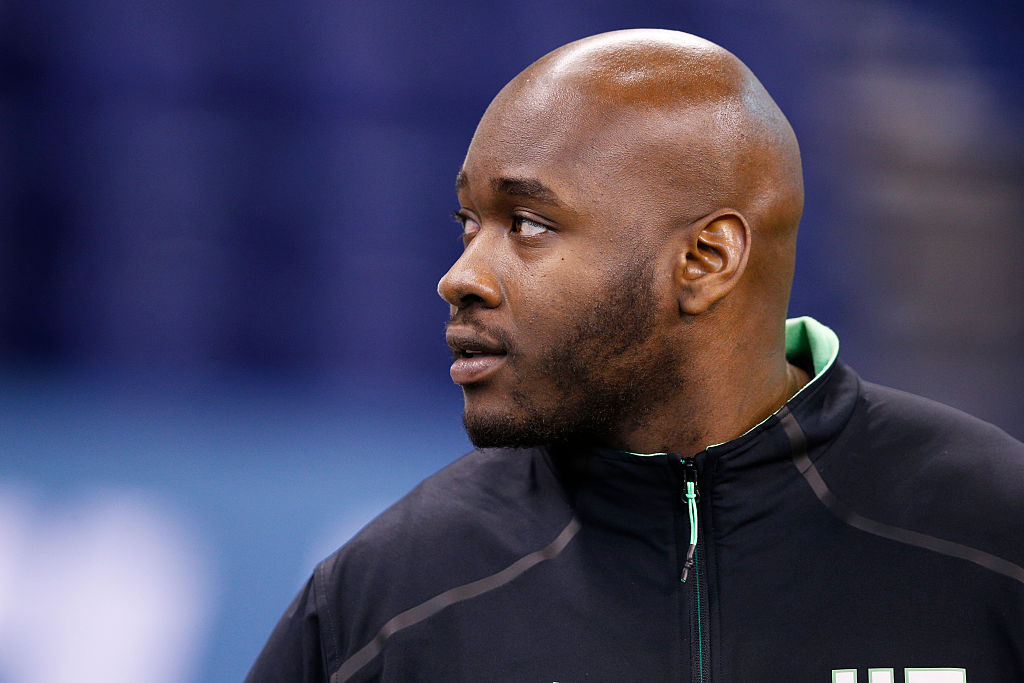 Before two blockbuster trades ensured he would go no higher than third, former Ole Miss tackle Laremy Tunsil was the consensus No. 1 overall pick of the 2016 NFL Draft.

Just minutes before that pick was made, though, Tunsil’s social media accounts broadcast a video of him smoking marijuana through a gas mask—and the smear of Tunsil, which would ultimately cost him millions in slotted salary, had begun.

The morning light, though, reflects more poorly on the teams, coaches, advisors, and everyone else controlling Tunsil’s path to becoming a professional football player.

The video spread quickly. Jokes, memes and hot takes flew around Twitter, while draft cards flew in with names other than “Laremy Tunsil” on them. He fell from No. 3, through No. 4, through No. 5. This left the lineman-hungry Baltimore Ravens with the chance to take the best tackle—and depending on who you ask, best overall prospect—on the board.

But, per NFL.com’s Aditi Kinkhabwala, Tunsil wasn’t on the Ravens’ board:

Ravens took Tunsil OFF their board after that video, member of organization tells me. OFF.

Tunsil sweating through this unprecedented hack/smear continued, with his Instagram revealing apparent text-message conversations between Tunsil and Ole Miss assistant coach John Miller about getting money to pay his mother’s rent. Speculation as to who might have been doing this, and whether any of it was even real, rampaged after Tunsil’s fall was stopped by the Miami Dolphins at No. 13.

In post-draft interviews, Tunsil confirmed both the marijuana use and accepting money from coaches, even though he told ESPN Radio that he didn’t know about the second leak.
Tunsil had just committed all of the draft’s greatest sins: He had major concerns arise just before picks started, he failed to shield his college coaches from any of their wrongdoing, and he had the temerity to be honest about it. The day he’d been dreaming of for much of his life became a nightmare, and all of it was his fault.

Except, none of it was his fault.

His social media accounts were hacked, and the media was posted specifically to damage him. Ole Miss head coach Hugh Freeze told ESPN the gas mask video “is from a long time ago,” and Tunsil claimed he’s never failed a drug test.

Insiders have claimed for years that the NFL doesn’t really care about marijuana use. The league just wants to make sure players can be responsible and avoid getting caught. Until this malicious hack, Tunsil had done just that—experimenting and partying like many of his fellow Ole Miss students, but coming up clean when it counts.

The Ravens—who, after Robert Nkemdiche’s combine confession should have known Tunsil had at least been around the green stuff—saw the video and flat-out panicked. Dolphins general manager Chris Grier told ESPN that they already investigated rumors of Tunsil’s drug use, and were “comfortable” with him as their No. 2 prospect.

In Baltimore, though, months of work by scouts and executives had put them in position to get the best prospect in the draft at their position of biggest need, and they set it all on fire in a fit of reefer madness. The Ravens’ loss is the Dolphins’ gain—but Tunsil can’t ever get those millions back.

Tunsil’s greater scare-quote “crime,” which may have long-term ramifications, is his admission to taking money from Freeze’s staff. Freeze’s incredible recruiting success since arriving at Ole Miss has long been subject to jokes and speculation about so-called “bag men” offering cash and services to family members. Tunsil’s admission now puts the program squarely in the crosshairs.

NFL teams had just spent months anonymously grousing about Christian Hackenberg allegedly-but-maybe-not acknowledging the plain fact that he was better suited to the offense of the head coach who recruited him to Penn State, Bill O’Brien, than his successor James Franklin.

“Despite the fact that it’s probably true,” a source told The MMQB’s Robert Klemko, “you don’t want to hear a kid say that.”

Right. God forbid an athlete admit there’s anything in his life he can’t fix by working harder. Well, if Hackenburg “threw Franklin under the bus,” as many characterized it, Tunsil dropped a nuke on Oxford, Mississippi.

There will be investigations. There may be sanctions. Clean-shaven white guys in bleached and starched polo shirts might get fired. For goodness’ sake, future Ole Miss football teams may not win as many games. All because Tunsil came to his coaches, hat in hand, asking for help in paying his mother’s water bill.

Of course, the transgression here isn’t an athlete with a multi-million dollar market value asking for compensation beyond a laundry bag full of college credits he’ll never use. The transgression is a system in which a multi-billion dollar professional sports league (the NCAA) wrings buckets of cash (and NFL-caliber football facilities, and corner office suites, and luxury travel, and handsome raises) out of the bodies of young athletes, pays them nothing in return, and tells them they’re being done a favor.

The transgression is hundred-million-dollar athletic departments looking the other way, while boosters drag bags of cash into small, rural, depressed communities like Tunsil’s hometown of Lake City, Florida and drag five-star recruits back out.

The transgression is a culture built from the ground up to exploit young men—children—for everything they’re worth, and publicly savage their character if they don’t play along. The transgression is not a kid like Tunsil just trying to figure out how to live the life he’s been promised in return for the work he repeatedly said last night he was “blessed” to be able to do.

"I think he's the best player in the draft." – @MelKiperESPN on Laremy Tunsil

The NFL Draft is on ESPN.https://t.co/wBexOBcR6e

The Great Scorer, as Grantland Rice famously wrote, is marking all this down. Teams like the Ravens who passed on Tunsil may come to regret it. Freeze and Ole Miss will face a reckoning, to one degree or another. Whomever is responsible for smearing Tunsil, we can only hope, will be found and punished. Tunsil could well go on to have a Hall of Fame career.

And maybe, just maybe, the powers-that-be in the NFL and NCAA, and the football-watching hivemind at large, will continue to think about a young man flop-sweating under TV lights, humbly admitting and apologizing for every foot he’d put wrong in his life.