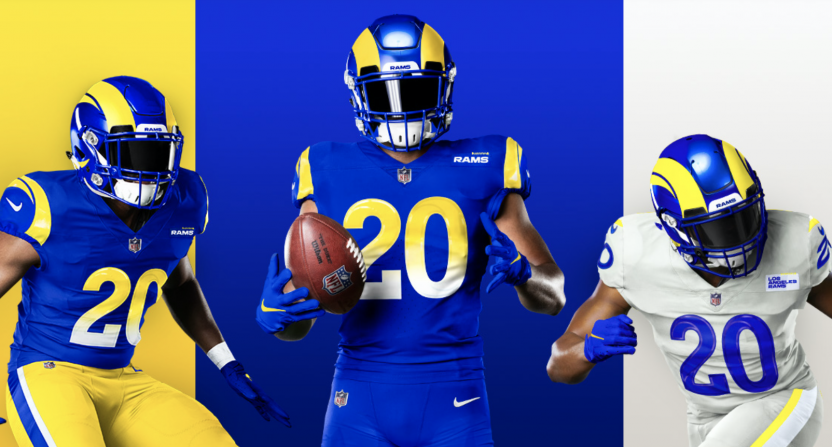 It’s tough to screw up blue and yellow on a sports uniform but the Los Angeles Rams somehow did that with their new uniforms.

The Rams revealed their new look consisting of three designs. An all-blue design with mostly yellow numbering, a blue jersey with yellow pants, and then an all-gray jersey with blue numbering.

The results are jarring. The blended colors within the numbers on the blue jersey kind of look cool but the rest of it is just wrong. Starting with, what I assume is, the away gray uniform. The Rams claim it was “inspired by the color of a ram horn and the sands of LA” but it’s actually a uniform that’s devoid of any personality. With the blue helmet, blue numbers, and yellow stripes, this looks like a design that’s only half completed. And then the designer forgot to finish their design so in order to make their deadline, they just submitted what they had and came up with some story that the gray represents sand. Also, the white “Los Angeles Rams” patch on the shoulder looks as plain as Dwight Schrute from The Office making a banner telling Kelly Kapoor “It is your birthday.” It’s a “statement of fact” that these are the Los Angeles Rams.

On the other end, the home (assuming) and Color Rush designs are very loud, almost to an obnoxious level within the clip. I’m going to cut the Rams a bit of slack because seeing these jerseys on sale at their team shop, they don’t look as bad but that doesn’t completely save them either.

The Rams were the final team to reveal a new uniform set this offseason. The Buccaneers, Falcons, Chargers, Browns, Colts (technically), and Patriots all revealed new designs. Even though some teams looked to some futuristic designs, at least one uniform from each team was based on a design that was previously worn. The Chargers arguably did that the best, releasing six great designs and channeling three different eras flawlessly. The Rams used similar colors but no one is going to be reminded of their “Greatest Show on Turf” days of the 90s. This was such a missed opportunity for the Rams, who very much seemed to overthink the situation and give people something they didn’t ask.