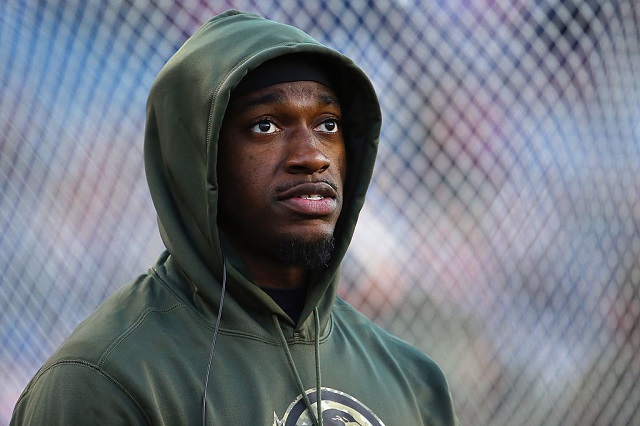 The Cleveland Browns spent last weekend meeting with free agent quarterback Robert Griffin III. In the days that followed, the link between quarterback and quarterback-needy team grew stronger until the signing appeared to be an inevitability.

On Thursday, the Browns made it official, signing Griffin to a two-year contract and adding him to a quarterbacks room that could see further changes in the coming weeks. NFL Network’s Ian Rapoport reports the deal is valued at $15 million over the two-year period, with $6.75 million guaranteed.

Griffin’s story is well known. Drafted second overall by a Washington team that paid a fortune in draft picks to move up to the then-St. Louis Rams’ spot in 2012, Griffin had a stellar rookie season, the likes of which have rarely been seen. He had a quarterback rating of 102.4, throwing 20 touchdowns to just five interceptions, while rushing another 120 times for 815 yards and seven scores. He was the Associated Press’ Offensive Rookie of the Year and a Pro Bowl selection, led the league in yards per rush and had the best interception percentage in the league. The year ended with a playoff berth for Griffin and Washington. Unfortunately, though, that’s where everything went downhill for Griffin.

What followed was a series of dramatic events, some in and some out of Griffin’s control. There was the knee injury that kept getting worse to close out his rookie year, leading to a torn LCL and ACL suffered in the team’s Wild Card playoff game—despite team doctor James Andrews not clearing him to compete in the game. He failed to bounce back in 2013 and spent the final three weeks of that season benched in favor of Kirk Cousins.

Griffin’s 2014 season was also injury-plagued: He suffered a dislocated left ankle in Week 2, and started only seven games. He then lost the starting job completely to Cousins in 2015, winding up as the team’s No. 3 quarterback. The writing was on the wall—there was no way that Griffin would remain in Washington in 2016. He was released in early March.

Meanwhile, the Browns have spent the years Griffin was under contract in Washington flailing and failing. Hue Jackson is the Browns’ fourth head coach since Griffin was drafted and the past four seasons have seen eight quarterbacks get at least one start for the team. When Jackson took over the Browns job in January, he made it clear immediately that quarterback is a top priority position to fill this offseason. It was also clear that the young passer on the roster at that time, Johnny Manziel, was to have no future in Cleveland.

RG3 had a trip to Cleveland that inspired him and Hue Jackson to a level that should make any Browns fan thrilled with this marriage.

With the No. 2 pick in the 2016 draft, though, the expectations were that the Browns would pursue their perceived (next) quarterback of the future with that selection.

Signing Griffin does not preclude the Browns from continuing down that path, whether to select North Dakota State’s Carson Wentz, California’s Jared Goff or someone else. NFL Network’s Jeff Darlington said on Thursday that “if everything goes to plan,” Griffin will be Cleveland’s Week 1 starter, but it’s simply too soon to be confident in such an assumption. All indications are, at least for now, that Griffin is a piece of the puzzle but not necessarily its solution.

In the Browns’ official statement announcing the signing, Jackson said, “Just like every player on our team, Robert will have to earn every opportunity he gets. He will compete with the rest of the quarterbacks on our roster.” The team’s Executive Vice President of Football Operations, Sashi Brown, said, “We’ve been clear on the importance of improving and stabilizing the quarterback position for our franchise. We have said that the draft is and will be our primary focus, but we will always look to complement the draft through free agency, and this is one of those examples.”

So, despite Darlington’s prediction and the rather lucrative, if short-term, contract Griffin received, it should not be taken as a foregone conclusion that Griffin was brought in to be Cleveland’s 2016 starter—at least, not without a true competition taking place first.

Right now, Griffin joins Josh McCown, Connor Shaw and Austin Davis as the fourth quarterback on Cleveland’s roster. The signing, though, does mean McCown’s time with the Browns is winding down. The team will try to find a willing trade partner and, if nothing materializes, will release the veteran. Davis’ and Shaw’s statuses with the team are also on potentially shaky ground. The fewer quarterbacks in the competition come late spring, the better Griffin’s chances for redemption with his new team. But risks are still inherent to Griffin’s game, ones only further compounded by other question marks peppering the state of Cleveland’s offense.

There is Griffin’s injury history, which while in the past remains a concern, given that he did not play a single snap in the 2015 regular season. There are the holes the Browns must fill on the offensive line at center and right tackle after losing Alex Mack and Mitchell Schwartz in free agency. The receiver position is still an unknown, after Travis Benjamin also left in free agency and Josh Gordon’s reinstatement has yet to be granted. The wild card in the situation, aside from how the quarterback room will look come May, is Jackson, long considered an offensive guru who coached Jason Campbell to an 11-7 record when head coach of the Oakland Raiders and who built up the confidence of Andy Dalton when serving as the Cincinnati Bengals offensive coordinator.

Still, Griffin will be taking part in a competition, and the outcome could range from him winning the starting job to him serving as a backup to a rookie. Griffin’s unique skill set and the Browns’ desire to add an intriguing veteran to the roster make Thursday’s signing a sensible one for both sides. The Browns get the quarterback that they—in a different front office and coaching iteration—wanted back in 2012, for a far less expensive price, and Griffin gets to move on while having the opportunity to once again become an NFL starter.