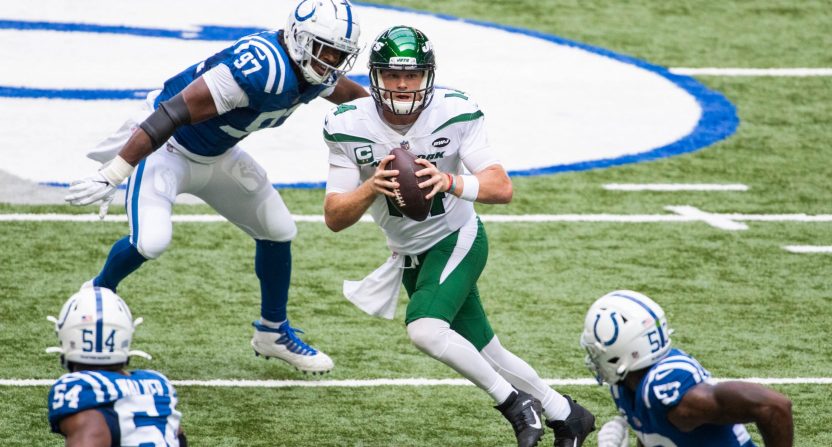 Maybe Darnold and Haskins are lost causes. Just the latest additions to an ever-growing scrap heap of quarterbacks who were misevaluated and overdrafted. That’s plausible. But it’s also undeniable that their respective NFL teams put them in positions to fail.

The Washington Football Team (1-3) benched Haskins, who was demoted to third string last weekend. He might be shipped out before the trade deadline. If the New York Jets (0-4) get the No. 1 overall draft pick, they probably will take Clemson’s Trevor Lawrence to replace Darnold.

How about the Jets and Washington show some accountability? These teams rank No. 1 and No. 2 respectively in worst scoring differential.  The Jets are minus-86. Washington is minus-53. No matter how poorly Darnold and Haskins have played, it’s not all their fault.

The job of every NFL team is to create a nurturing environment for quarterbacks to thrive. Handle with care. That way when a star QB does come along, he develops into the best he can be. Kansas City Chiefs did it with Patrick Mahomes. Philadelphia Eagles did it with Carson Wentz. The Dallas Cowboys did it with Dak Prescott.

Shocker that this didn’t work. No wonder Washington hasn’t won a playoff game since 2005. Little surprise that the Jets haven’t been to the playoffs in a decade. Now these dysfunctional franchises have the audacity to point the finger at their quarterbacks.

Let’s look at Darnold first. There’s a real chance New York could go 0-16 this season. But things have been bad for Darnold before this year.

In 2018, the Jets traded up to No. 3 overall to select him. Since then, he has played for two different coaches and two different general managers in his three seasons. Different regimes with different philosophies on how to build to teams.

According to these advanced metrics, New York had the worst offensive line in football in 2019 (third-worst in pass protection, second-worst in run blocking). This year, they completely revamped the line, including spending their top draft pick on University of Louisville behemoth Mekhi Becton. The unit is still lousy.

If that wasn’t bad enough, the Jets also haven’t given Darnold enough weapons. In the off-season, they let his best wide receiver Robby Anderson walk as a free agent. Now, Darnold throwing to a hodge-podge of wideouts: Jamison Crowder, Braxton Berrios, and Chris Hogan (This is partially due to injuries to rookie Denzel Mims and veteran Breshad Perriman). And while Crowder has been a pleasant surprise, if he’s your best wide receiver, you’re not good enough. They signed high-priced free-agent tailback Le’Veon Bell, who was a bust, and they embarrassingly released him Tuesday night.

It’s no wonder that Darnold ranks third worst in the league in passer rating (70.7) and the Jets rank dead last in points per game (15.0).

Darnold played for defensive-minded coach Todd Bowles as a rookie. The Jets replaced him with offensive-minded Adam Gase, who was supposed to fix Darnold. But Darnold has gotten progressively worse.

Gase said he’s considering giving up play-calling duties. But it seems unlikely that this will make a difference for Darnold when he returns from a shoulder injury that kept him out last week. Darnold is 11-19 as a starter with 32 interceptions in 30 career games.

Instability and a lack of talent is how you ruin a young quarterback.

Speaking of which, that brings us to Haskins. Washington won its season opener over the Philadelphia Eagles. Then it lost back-to-back games at Arizona and Cleveland before pulling the plug on Haskins. We know exactly what new coach Ron Rivera thinks of him. How? He took the unusual step of demoting Haskins to third string behind backup Alex Smith whose surgically repaired leg is being held together by duct tape and chicken wire.

This was no way to treat Haskins who has selected No. 15 overall in the 2019 draft. He’s appeared in only 13 games, going 3-8 as a starter. Haskins’ previous coach, Jay Gruden, and the general manager Bruce Allen who took him were fired last year. In comes Rivera. His No. 1 job is to see if he can salvage Haskins. Guess not. Haskins got a quick hook.

In 2019, Washington’s offensive line was even worse at pass blocking than the Jets, ranking second-to-last in the league. This year, it remains second-to-last. Washington has one reliable receiver in Terry McLaurin.

It’s no wonder that Haskins ranks fourth worst in the league in passer rating (80.3) and Washington ranks dead last in total yards per game (263.0).

Haskins was benched in favor of mediocre Kyle Allen. The company line is that Allen, who played for Rivera in Carolina, knows the offense better.

Wait. What? This begs the question: why didn’t Rivera install a system that would best suit Haskins? Instead, he brought in offensive coordinator Scott Turner, who was his quarterbacks coach at Carolina last season.

Rivera said that Haskins got every chance to be the starting quarterback. That might be true. What is also true: Washington didn’t do Haskins any favors.

Darnold and Haskins will both be 24 years old when the 2021 season starts. They’re young enough to salvage their careers. They entered this league as talented players who needed proper guidance. They didn’t get it from New York or Washington. Maybe they will elsewhere.

Perhaps Trevor Lawrence is paying attention to what has happened to Darnold and Haskins. He might want to pull an Eli Manning and simply refuse to play for New York or Washington.

He has the leverage. Besides, who wants to be another quarterback set up for failure?