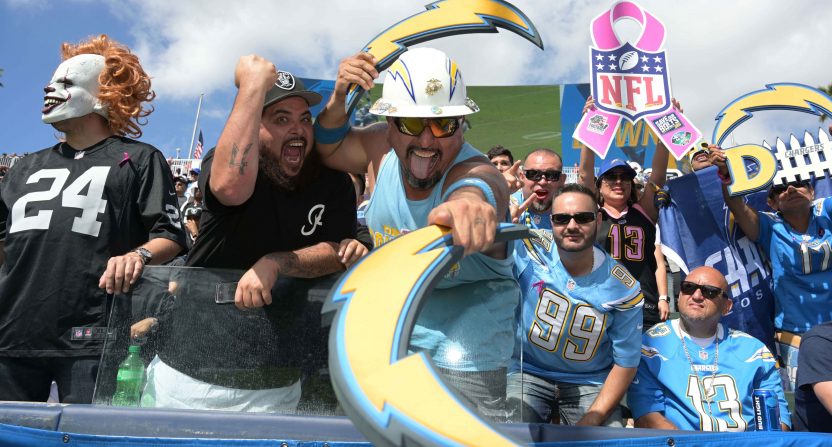 This week, the NFL’s owners and executives met for another set of league meetings, and one team continually came up in discussions: the Los Angeles Chargers.

What was talked about in reference to the Chargers? Their struggles to date in Los Angeles.

A major discussion topic among NFL owners/executives at this week’s league meetings is the Chargers’ viability in LA. PSL sales have been a struggle and team is expected to revise its Inglewood revenue goals sharply to a more realistic number: $400m to around $150m, per sources

To be clear: There hasn’t been a formal presentation on it this week. But it’s been a topic of private conversations. https://t.co/kv4anrHuLx

The NFL makes an ungodly amount of money every year, as do the league’s 32 teams, but for one team to cut their future revenue projections for their new stadium by more than 50% is wild. Granted, the number in this situation could largely be tied to the Personal Seat Licenses that the team is struggling to sell for their new stadium.

It’s also not surprising that the team is struggling to sell PSLs and meet revenue goals. After all, the majority of their home games are attended by the visiting team’s fans. On top of that, the team is currently playing at a soccer stadium while their new stadium is being built, and the Chargers have had issues selling out their home games when they were still in San Diego.

This all leads back to the team’s viability in Los Angeles, which has been a realistic thing to question since they announced their move north from San Diego.

When the Rams and Chargers both announced they were moving to LA, they arguably became the second and third most popular franchises in Los Angeles. Since leaving for Oakland, the Raiders have maintained a strong fanbase in the nation’s second largest market, while the Rams have been able to say the same since they first moved to St. Louis. Due to their recent success, it’s fair to say the Rams have now jumped over the Raiders, while the Chargers still sit in third place (at best) among fans in Los Angeles.

Given that the Rams announced their move before the Chargers, the more logical decision would have been for the Raiders to move south and the Chargers to move east to Las Vegas. Unfortunately for the NFL, that didn’t happen.

For the Chargers to be viable franchise in Los Angeles, they’ll need a lot to break their way down the road. With the Rams flying high and looking like they could have a dynasty on their hands, the chances of the Chargers being a viable NFL franchise in Los Angeles continue to diminish. As long as the Rams continue to be good, the Chargers need to get something going and be good themselves. Luckily, they’re off to a 4-2 start this season and have only lost to the Rams and the AFC West leading Chiefs. From there, they then have to somehow manage to steal away fans from the Raiders or neutral fans still figuring out which team they should root for in LA.

NFL Commission Roger Goodell also talked about building a fanbase in LA for the Chargers, but really didn’t mention how the franchise could do that.

“Lots of football, lots of building still to do,” Goodell said. “And frankly, we were out of the market for a long time, and we have to earn our way back with our fans. We have to build that relationship back with our fans and make sure that we do it right. Both teams are committed to that. It will be something that we have to work at over a period of time. They both have very exciting young teams, and I think that will be helpful also. But I think all of those things will come together over the next two years. That’s the work that needs to be done.

But that’s not as easy as it sounds when the Raiders are still close enough that fans could easily make day trips each year to either Oakland or Las Vegas. It’s also not that easy when the team is on the cusp of moving into a new stadium where tickets won’t be cheap.

Forget fighting for fans with the two more popular teams in Los Angeles. If the Chargers are struggling to sell PSLs for their new stadium, how can they expect to sell single game tickets when they move into their new stadium? They’re currently having issues selling tickets to their own fans for home games at a much smaller soccer stadium, so how on Earth are they going to do it in a brand new, much larger NFL stadium when it opens? If the team can’t sell tickets and make money, they can’t stay in LA.

The Chargers don’t have a future in Los Angeles, plain and simple. The nation’s second largest market shouldn’t have added two NFL teams at the same time unless it was the Rams and Raiders. While the market is big enough to support two NFL teams, seeing as they have a pair of MLB, NFL, and NHL (and hell, even MLS) teams, it’s the lack of an established fanbase that’s dooming the Chargers.

The NFL succeeds in much smaller markets, like Green Bay and Buffalo because of the fans. It’s pretty wild to think that in a city as large as Los Angeles with a population of nearly four million, it’s the lack of fans that’s going to threaten the viability of an NFL franchise.

3 thoughts on “The NFL is worried about the Chargers’ viability in LA, and they should be”