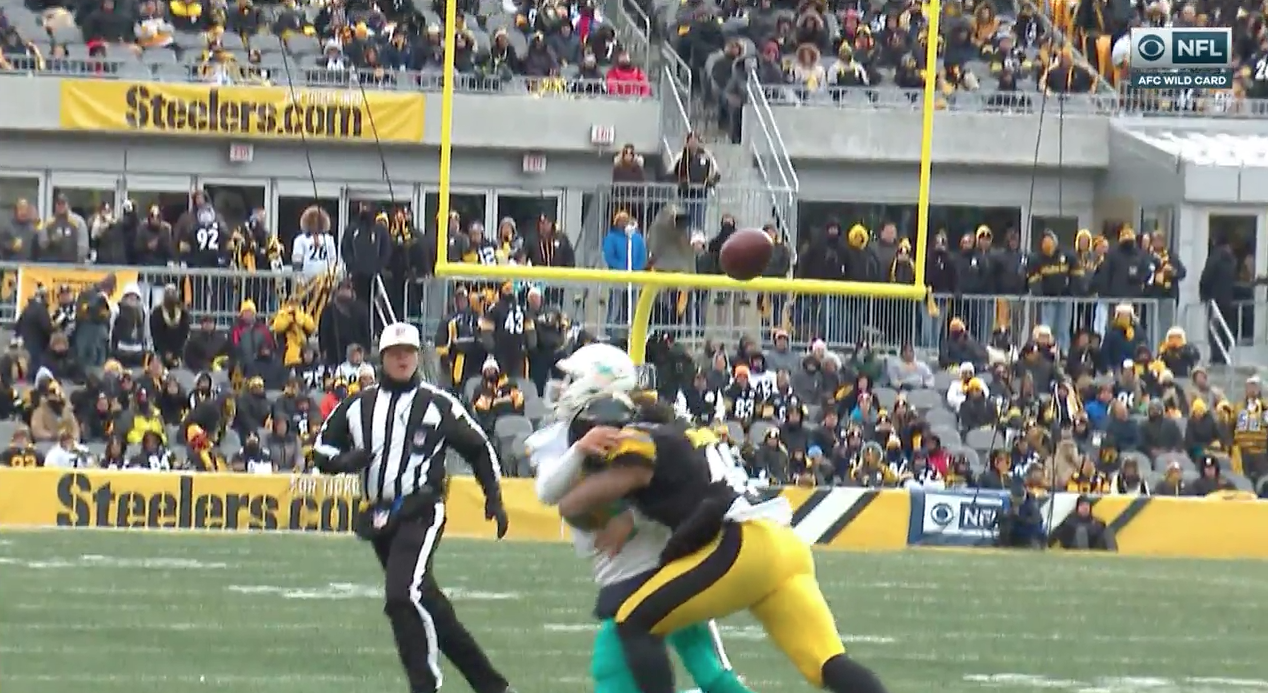 Hey, Roger Goodell, your concussion protocol is bullshit! It’s not the first time your bogus attempt at protecting players has been exposed as the fraudulent PR stunt it really is, but the latest sure brings it back to light that the NFL really just doesn’t give a damn about player safety.

At full speed, Dupree came in so fast after Moore that you would have thought he killed him. It doesn’t look too much better in slow motion.

After getting drilled in the face with the crown of Dupree’s helmet and his head turning as if he was in The Exorcist, Moore was down for a couple minutes and went to the sideline to get checked out by the “independent neurologist.” Moore missed one play and according to CBS sideline reporter Tracy Wolfson, the “independent neurologist” felt that because Moore was hit in the jaw and didn’t lose consciousness, he was cleared to go back in.

I put the words “independent neurologist” because something isn’t right here. Either this neurologist isn’t “independent” and they were being pressured by someone within the Dolphins or the NFL to keep Moore in or they’re a terrible neurologist who should give back their to whatever clown medical school this person graduated from because they’re in gross violation of the Hippocratic Oath.

Taylor Twellman, who is an advocate for concussion research and had his soccer career cut short due to concussions, seemed to agree that you don’t need to lose consciousness to get a concussion.

"Losing consciousness" DOES NOT mean you don't have a concussion @NFL……but hey i'm not "independent neurologist". PATHETIC @NFL. https://t.co/hsIAd3Sk0N

I don’t have a medical degree. I didn’t go to medical school. What I do have is common sense and that, plus my previous experiences, told me that Matt Moore likely had a concussion. And if he somehow didn’t, it takes longer than a minute or two to determine whether he has one or not.

And full disclosure, I admit I’m a Steelers fan. But before anyone calls me out and claims I’m only this upset because I want Matt Moore out of the game so the Steelers win, know that while it wasn’t a late hit, Dupree’s hit was a cheap shot for leading with the crown of his helmet. But, more importantly, I don’t want to see anyone get hurt and it would be sick of me to cloud my judgment of whether someone should get proper medical attention based on whether it benefits my team or not.

Also, while this happened to Matt Moore, the same thing could happen to Ben Roethlisberger, anyone on the Steelers and anyone else on any team on any given day. You never want to see anyone get hurt for a cheap hit like that regardless of who it is. But if it happens to a Steeler player, which it has on occasion, I would want them to be properly evaluated as well. And if they need to be taken out, it’s not going to be a great feeling, but I would also want to see the players I root for every Sunday live past the age of 50 with their mind still intact.

The NFL should just give up this pretense and admit that Matt Moore is playing because the Dolphins are down 20-6 and the team needs him in a playoff game in order to have a chance to beat the Steelers. Don’t act like we’re stupid and try telling us something that clearly wasn’t the case. A lot of people may have been fooled, especially Phil Simms, but this is why it’s important to question authority and not implicitly trust people in authoritative positions. Because sometimes, those people in authority abuse power and sometimes doesn’t have a person’s best interest in their thought when making a decision like this. Matt Moore is playing because of a football decision, not because of a medical decision, and that is why the NFL’s concussion protocol is bullshit.