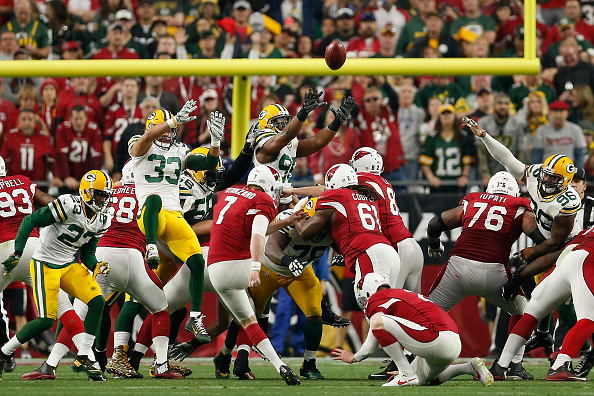 With Week 17 of the NFL season wrapped up, we have our first full year of statistics with the new extra point rules in place.

The change was implemented last May in a vote that was a resounding 30-2. The idea in changing it was to make it more interesting for spectators, as the kicks become more difficult, and points can be scored by the defense on failed attempts.

With the first year of results in the books, it appears that it worked, whether the change is big enough or not is up to you personally:

Last season, the kicks were essentially a given, and even if they weren’t, the fact that the other team couldn’t turn around and do anything with the ball didn’t make things quite as interesting. Defenses had little incentive to stop extra points, but that has been changed.

A team has never blocked an extra point and taken it back to the house for two points.

And while the success rate is still extremely high, there is that low chance that we might see some sort of miracle in any given game. We could still see the effect that the rule change has had and will have in the upcoming playoff games, and if last season was any indication, it could very well happen.

There also seemed to be a thought that the rule change might entice teams to go for two points more often, but the only team in the league that really rolled the dice on that was the Pittsburgh Steelers. They were confident in it too. “I tried to tell you guys early on that we would do it, and I think you guys kind of didn’t quite believe it. But it’s something we feel comfortable with,” Ben Roethlisberger said back in September.

There is absolutely more time for teams to adapt to the changes as the seasons go by, and more teams might go for two moving forward, which would really spice things up. And if the Steelers are that confident in it, surely there is something there. But it seems safe to say that if anything the rule change was good.