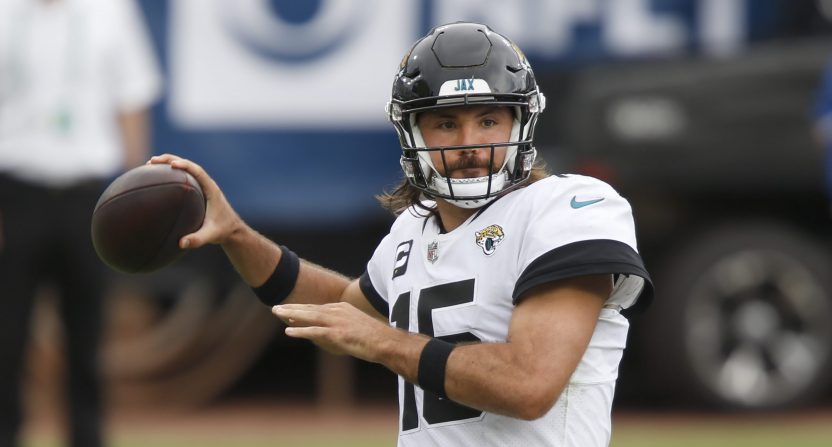 The key pre-Week 1 storylines are pretty clear and obvious every NFL season, but those often shift dramatically with just one weekend of football. With 16 games in the books, here are the top emerging stories to monitor entering Week 2.

New Washington head coach Ron Rivera, who is battling cancer, was getting an IV when sophomore quarterback Dwayne Haskins gave a rousing speech to his teammates at halftime of an opener in which the WFT faced a double-digit deficit against the reigning division champion. From there, Washington outscored the Philadelphia Eagles 20-0 in the second half to shockingly move to 1-0. Rivera has instilled a never-quit attitude in D.C., and it doesn’t hurt that Chase Young has put a jacked defensive front seven over the top.

Jacksonville Jaguars quarterback Gardner Minshew III is one of only four current NFL starting quarterbacks drafted in or beyond the sixth round, and that could change in a flash when bridge starters Ryan Fitzpatrick and Tyrod Taylor step aside in Miami and Los Angeles. Minshew is trying his best to defy the odds the same way fellow sixth-round pick Tom Brady did, and the league’s third-highest-rated passer is off to a strong start as a sophomore. Can he keep this up? Hopefully, because he’s a damn pleasure to experience.

Meanwhile, for the first time in 19 starts, Brady threw multiple interceptions in his debut with the Tampa Bay Buccaneers. Now, he has a passer rating of just 81.8 in his last 14 game, and he’s lost five of his last seven starts. No quarterback has ever succeeded at or beyond the age of 43, and it’s becoming clear that even Tom Terrific won’t be an exception to that rule. Might this become a goodbye tour?

Few are likely to fall for Trubisky’s suddenly impressive late-game performance against the Detroit Lions, but the fact is he threw three touchdowns and posted a 138.5 passer rating in the second half, and earned the right to start again in Week 2. Trubisky is fighting for his career with the Chicago Bears, which should be interesting considering his immense talent.

The resurgence of Cam Newton?

For the first time in nearly two years, Newton looked healthy in his debut with the New England Patriots. He utilized his unique physical skills and the Pats are 1-0. Now we’ll see if the 2015 MVP can sustain it.

The collapse of Jimmy Garoppolo?

Jared Goff crapped the bed in Super Bowl LIII and was a mess the following season. Will the same happen to Garoppolo after he fell on his face with the San Francisco 49ers in Super Bowl LV? An 8-for-17 second-half showing in a letdown loss to the division rival Arizona Cardinals isn’t a good sign. Keep in mind that Jimmy G’s essentially on a year-to-year contract in San Francisco.

The end of the Sam Darnold era?

While fellow third-year top-10 pick Josh Allen put on a show against his New York Jets, Darnold just couldn’t get it done in an ugly loss to kick off his third NFL campaign. At this point, you’d have to imagine that both he and head coach Adam Gase are on thin ice, and that the Jets might soon start thinking about Trevor Lawrence and/or Justin Fields.

The inevitable blow-up in Cleveland?

There’s no way the Cleveland Browns can become more talented. This is the team, complete with shiny new offensive tackles to protect third-year No. 1 overall pick Baker Mayfield, an expensive new tight end, and the return of elite edge defender Myles Garrett. Week 1 was a disaster, though, and if things don’t turn around quickly, it’s easy to see it all blowing up (again) in Cleveland.

Incredibly, Wilson has never even received an MVP vote. Could this be the year? A 31-for-35, four-touchdown performance in the Seattle Seahawks’ impressive opener has to place him among the top-tier contenders out of the gate.