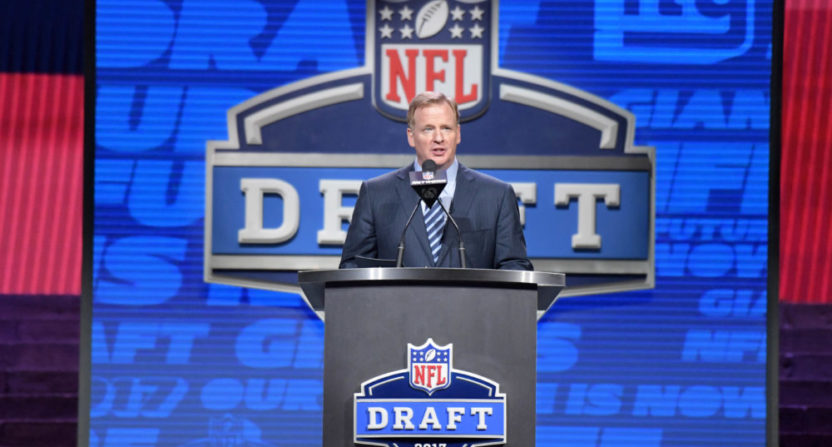 There are as many theories for the NFL’s ratings decline as there are bad beat stories. Everyone’s got one, and nobody’s quite sure which one to believe. But of all the theories, the simplest one — and the one I keep coming back to that best explains the current NFL malaise — is oversaturation.

Simply put, the NFL was always going to reach its cultural peak point of popularity as ratings and interest kept rising through the last decade and eventually come back down to some sort of mean. In other words, the league wasn’t going to keep growing in popularity forever.

We’ve seen it happen with various cultural phenomenon throughout the years. Who Wants To Be A Millionaire? quickly faded from the spotlight once ABC decided it would be a good idea to jam it into their schedule every night of the week. American Idol slowly declined over the years until it was supplanted by similar competitions like The Voice. (Of course, Idol is now making its return on ABC after a hiatus. But then again, so is Roseanne.) Even a powerhouse franchise like The Walking Dead is struggling to maintain the same level of relevance and ratings that it has enjoyed throughout its record breaking run.

In the same vein, the easiest explanation for the NFL’s downturn in ratings is that people have decided they’ve just had too much football. With the advent of regular Thursday Night Football, the league has expanded its reach to roughly half of the week throughout the fall. And with the unstoppable onslaught of non-stop coverage from ESPN and others, controversies that generated news headlines outside of sports, fantasy football and daily fantasy, etc. etc. etc., there are times where it seems like there’s just no escaping the NFL.

Which is maybe why there have been a number of people who have decided to unplug and do just that.

Looking at the scenario outlined above, it might be sensible to pull back a little bit and go with the philosophy that less is more. Maybe the NFL could create more exclusivity and more of a demand for their product to give it that special feeling once again.

Instead, it seems as if the NFL is going in the opposite direction. Namely, the league is trying to overwhelm your television even more in an attempt to win back lost fans.

This is best illustrated in the recent news that Fox will be simulcasting NFL Network’s coverage for the upcoming NFL Draft.

The natural question that comes to mind is… why, exactly? Does the NFL really need the draft televised on not one, not two, but three different networks?

Who is the league trying to reach exactly with this move? Is it cord cutters? If that’s the case, it’s likely that those individuals have already decided they can live without ESPN and the 24/7/365 NFL cycle. Is it casual fans? If so, the draft is probably not the event for them to suddenly get plugged in.

The cross-section of “people who don’t have cable access” and “people who are hardcore NFL fans and will devote hours to watching the draft” is not huge. It’s hard to imagine that the NFL is going to pick up any real new fans through this move because the draft is already so widely available and accessible, and such a niche event to begin with. Is someone out there really going to be inspired to become an NFL fan based on Mike Mayock breaking down sketchy tape of an obscure D-II tight end prospect?

If anything, it’ll only dilute the audience across the three networks even more. It’s good news for Fox, who will add another live event to their “New Fox” mantra and growing relationship with the NFL. On the flip side, you can imagine how thrilled ESPN must be by this news, especially after it was reported that Fox may also be taking away their playoff game too.

With games, it might make more sense. But even that seems like overkill these days. Thursday Night Football has been seen on network television (CBS/NBC), NFL Network, and a streaming platform (Twitter/Amazon). The aforementioned ESPN playoff game was also simulcast on ABC. EVEN THE PRO BOWL got the multi-network treatment this year. Think about that. Is the Pro Bowl an event of such staggering proportions that it demands to be seen on multiple networks at the same time like the College Football National Championship Game?

All these simulcasts might lead to a short term jolt here and there for the Pro Bowl or the Draft, but does it really mean anything in the big picture if the ratings for what actually matters — the games — are still in decline? The NFL saw ratings drop by 10% this season and Thursday Night Football saw several significant declines compared to last year. Every step of the playoffs fell in ratings and so did the Super Bowl.

Is the league actually reaching new fans with these moves or are they just papering over the cracks and hoping to inflate their numbers by any means necessary?

The NFL isn’t going to win back viewers who aren’t watching anymore by trying to over-saturate the market even more than they already have. Accessibility to the NFL has never been a problem. If anything, it may be counter-productive and drive away fans even more.

What’s the league going to do if they still find numbers going down after all of this? Adding more networks and platforms isn’t a solution to what is currently ailing the NFL. It’s just hoping in vain that something sticks.