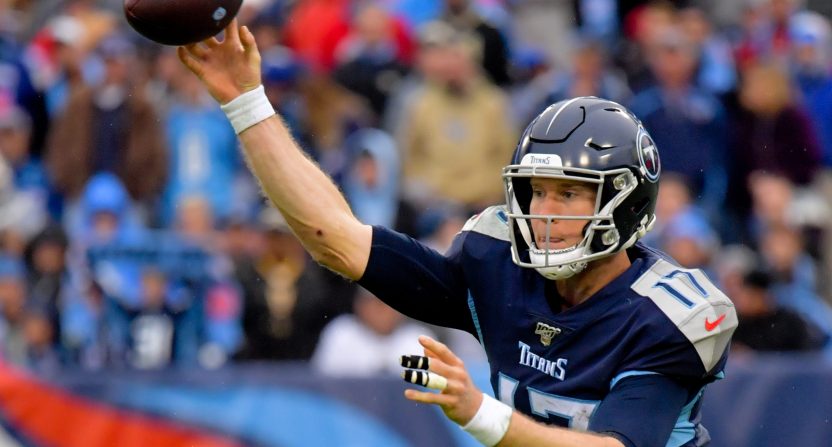 Other than flex scheduling, the NFL schedules the game times for the first 16 weeks months before the start of the season. For Week 17, the NFL has to change up the schedule after the rest of the games have been played. We knew the matchups in Week 17 and the NFL has it set that everyone plays another team in their division in the final week but game times aren’t decided until the week before. This is so teams who are competing for a division title or a playoff spot play at the same time so a team doesn’t get an advantage by knowing in advance what the other team did that day.

That’s what makes this situation a bit strange. This year, there are two open playoff spots remaining. One of them is the NFC East division where either the Philadelphia Eagles or Dallas Cowboys will get that spot. That’s pretty straightforward, the Eagles will advance unless the Cowboys win and the Eagles lose. And for that scenario, both teams have different opponents but play at the same time.

The other open playoff spot is the sixth seed in the AFC. The Tennessee Titans, Pittsburgh Steelers, and Oakland Raiders remain in contention and the Titans are the current leaders due to having the “strength of victory” tiebreaker over the Steelers. All three teams play in the 4:00 et time slot so neither will be aware of what the other two teams are doing. But there’s one game scheduled at 1:00 et that may influence how the Titans fare and may help them get that playoff spot.

The NFL has scheduled the LA Chargers-Kansas City Chiefs game at 1:00 et. This is important because even though the Chiefs have already clinched the AFC West, they remain in a battle for the third seed against the Houston Texans. If the Chiefs lose and the Texans win, the Texans get the third seed.

The Texans play at 4:00 et against the Titans. How this helps the Titans is that if the Chiefs win in the early game, the Texans will know they are the fourth seed and will be more likely to bench their starters. The Titans, who have to win to remain in control of their own destiny, suddenly have an easier opponent based on what happened that day. If the Chiefs had played at the same time as the Texans, the Texans wouldn’t know the outcome of the Chiefs game and would have to play their starters. In a roundabout way, it also hurts the Buffalo Bills because they may now be playing a more-rested Texans team in the playoffs.

One could argue that this situation isn’t a big deal. The Steelers are going to be playing a bunch of Baltimore Ravens backups because the Ravens already clinched home field advantage throughout the playoffs. Yes, the Steelers will be facing an easier team and that may help them win their game but that situation is different in that the game was scheduled before the start of the season and the Steelers simply got lucky that the Ravens got their business done before Week 17 to be able to bench their players.

The Chiefs’ scheduling decision was made after all the other games from the first 16 weeks were over and the NFL was aware of the situation. I honestly don’t believe that the NFL is trying to manipulate the schedule to keep the Steelers and Raiders out, but it does invite that belief among the left out fanbases.

Maybe there was a non-competition reason to have the Chargers and Chiefs play at 1:00 et. On the CBS Week 17 schedule, it lists three early games and four late games. One of those late games is the Indianapolis Colts vs. Jacksonville Jaguars, a matchup that has no playoff implications.

Here are THE NFL ON CBS Announcer Teams for Week 17 on Sunday, December 29 pic.twitter.com/N5cKp287mY

Surely, Colts-Jaguars could have been switched out for Chargers-Chiefs. Unless CBS wanted to have Chargers-Chiefs early for Pacific and Mountain Time Zone viewers and/or wanted to avoid splitting the LA market with the 4:00 et Rams game on Fox, there isn’t a reason to schedule the games like this.

Regardless of what happens, it’s not like the Titans deserve an asterisk if they make the playoffs due to the Chiefs winning. It’s a 16-game season and the Steelers and Raiders are fully aware that if they had just been a little bit better, they wouldn’t be in this situation. The Steelers are currently on a two game losing streak (even losing to the Jets) while the Raiders lost four straight (including to the Titans) before winning last week. Those two teams get a win at any point, this is a non-issue. So if it comes down to it that the Texans benched their starters because they knew the Chiefs won and that helped the Titans win, yeah the Titans would’ve gotten some help due to Week 17 scheduling but they would still deserve their playoff spot.