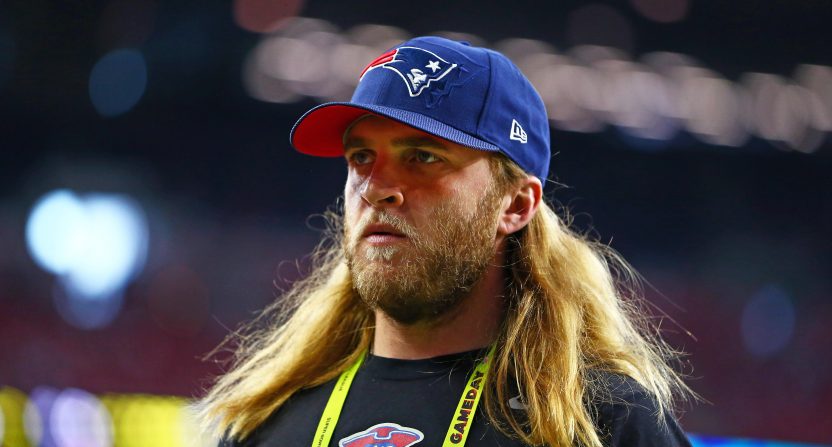 ATLANTA — At the overproduced spectacle that is Super Bowl Opening Night, in a professional basketball arena converted into an event space, among thousands of fans, reporters and cameras, a long-haired, somewhat awkward 31-year-old man sat on a chair in a corner alongside the rest of the New England Patriots assistant coaches.

The assistants are available for interviews on Opening Night, but they’re rarely in high demand. And that applies more so to millennial-aged position coaches who look as though they got lost on their way to a Rush concert.

So nobody was talking to the shy, bearded Patriots’ safeties coach in the corner.

Maybe he’d have been more popular had the majority of the media in the venue been notified that his surname is Belichick.

Finally, when a colleague and I approached the media-unfriendly, attention-despising son of the most accomplished head coach in NFL history, he reluctantly utilized his lungs, tongue and lips in order to create speech. But he didn’t appear to be happy about it.

In other words, the apple doesn’t fall far from the Belichick coaching tree.

Stephen Belichick was of course asked about his famous father. What is Bill really like?

“There’s lots of stuff that you don’t know about him,” he said, “and you’ll never know.”

Stephen’s been an assistant on his father’s staff since 2012. He’s been in charge of the safeties since 2016. He’s a two-time Super Bowl champion, but he’s not sure he wants to follow in dad’s footsteps and eventually serve as a head coach.

“I haven’t thought about that,” he said when asked about his future. “I didn’t even know I’d be a safeties coach. That’s just how it went. And I was excited about it, but I’m not looking forward to something next. I’m looking forward to being part of this team and to just win big games.”

It’s not as though Stephen hasn’t had time to consider that future. He started joining Bill at training camp every summer when he was in eighth grade, and his role has slowly grown ever since.

“I looked forward to the opportunity to be just a small, tiny, microscopic piece of the team every summer,” he remembered, “which I wasn’t even that.”

Anyone familiar with Belichick press conferences is also well aware of the pleasant reality that Bill Belichick is prone to suddenly open up with an elaborate and/or insightful and/or deep answer to a question that doesn’t apply directly to his current team or strategy.

“I’ve got to fill my grandpa’s shoes,” he said, “and his are as big as anybody out there. I was fortunate to spend a lot of time with my grandpa growing up and I miss him a lot. He taught me a lot about life, not just coaching. Fishing, football, family, friends, everything.”

But Stephen Belichick is admittedly focused on football, and X’s and O’s in particular. He suggested he isn’t “smart enough” to “teach with those personalities” and instead devotes his time to the game, not necessarily those who play it.”

But even when asked about the uncanny way in which his public persona mirrors his father’s, Stephen Belichick wouldn’t budge.

“I don’t think not wanting to dive into the media analysis is a unique Belichick characteristic.”